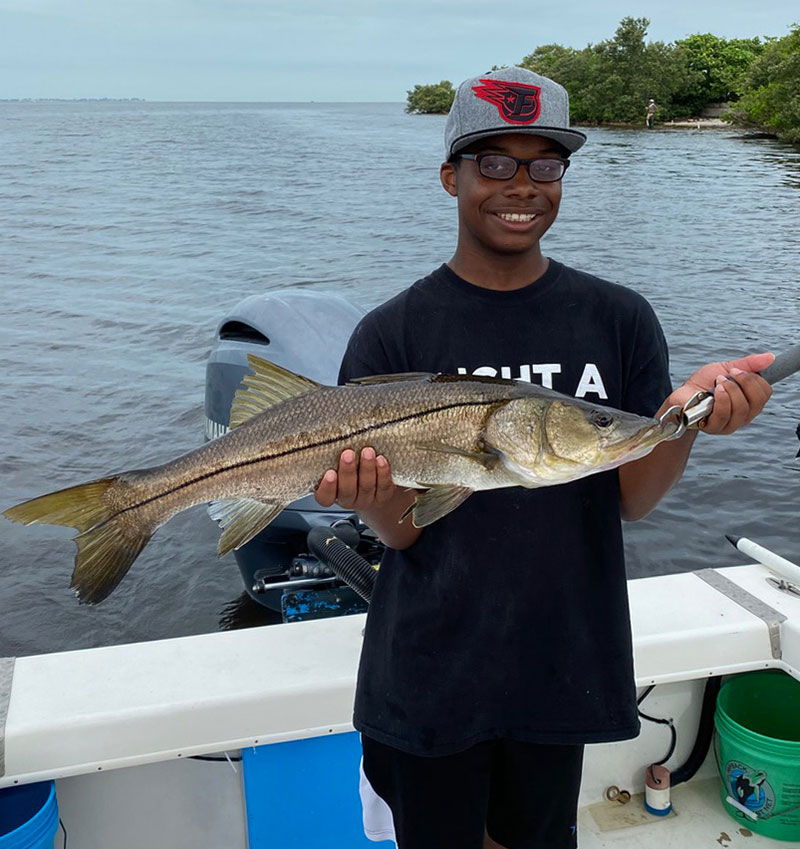 John McClain of Bradenton shows off his June 10 backwater catch, a 31-inch linesider, quickly released after the trophy photo, while on his first fishing charter. He was guided, along with his mom and uncle, by Islander reporter Capt. Danny Stasny of Southernaire Charters. 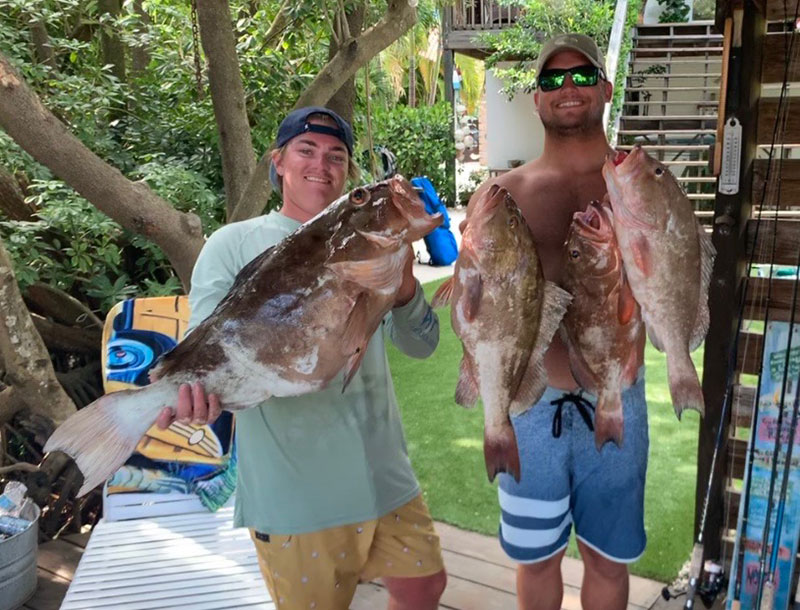 Marlin Ellis and Logan Reiber show off their catch of red grouper at the cleaning table, after a fishing trip with Capt. Mike Greig of Mike Greig Charters. Greig is Ellis’ uncle.

We’re into the hot stuff.

Fishing around Anna Maria Island is getting hot as we approach the middle of June. With temperatures most days reaching the mid 90s, fishing early mornings or after dusk is in your best interest.

Midday fishing is still productive if you’re willing to brave the heat, although the morning and evening bites can be slightly better — and especially cooler.

Fishing the flats for catch-and-release snook is getting better and better as these fish are massing in staging areas in preparation of their spawn — and they’re eating heavily, too. They need to pack on the pounds, so to speak, to have some energy reserves for their spawn. Free-lined shiners nearly always work as bait, although live pinfish and even some cut baits are occasionally working.

If you’re feeling sporty, try some artificials such as DOA Cal jigs or maybe a MirrOlure 84MR topwater plug and you just might get a surprise. There’s nothing better than seeing a big snook blast a top-water lure. Pure adrenaline.

In spite of the heat, spotted seatrout are showing in good numbers throughout the grass flats of Tampa and Sarasota bays. And the same scenario applies with these fish, too. Live shiners are great as bait, but artificials will get the job done. And the trout are even more apt than the snook to bite a lure, putting the odds in your favor.

Those targeting tarpon are experiencing a slight lull in the action due to the combination of the full moon June 5 and the rough seas from Tropical Storm Cristobal. The weather has murked up the waters where the tarpon like to frolic. Plus, the full moon usually triggers these fish to head offshore and get down to business. After their spawn, they will return and, when they do, they’ll be hungry. So be ready for some sizzling tarpon action in the coming weeks.

Lastly, the offshore species are cooperating nicely for those willing to venture far enough to find 100-plus feet of water. American red snapper are behaving true to form, eating everything that crosses their noses. Gag grouper are biting, as long as you can get the bait past the snappers. Amberjack are closed, but still provide ample sport action on heavy spinning gear.

And finally, venturing out to the offshore wrecks is worthy of the sight of a few permit sunning themselves on the surface.

On my Southernaire charters, my clients are enjoying a fantastic catch-and-release snook bite. In areas where tidal flow is swift, these linesiders are hitting baits seconds after they zing the water. Most catches are falling 20-26 inches, although slot-sized fish seem to be more frequent than normal. Morning charters are tallying 30-40 hookups.

Catch-and-release spotted seatrout are cooperating for my clients, too. Deeper grass flats where clean, clear water exists seem to produce the best bite. These fish are ranging in all sizes this week — some big and some not so big.

Mixed in with the trout are jacks, bluefish, ladyfish and mackerel, which adds variety to the bite. It also keeps my anglers on their toes. They never know what to expect.

Capt. Warren Girle is targeting tarpon along the beaches of Anna Maria Island and Longboat Key. After the full moon June 5, Girle is seeing fewer numbers of fish, although he’s still managing to put clients on some hookups.

On days when the tarpon fishing is difficult due to lack of cooperation on the weather, Girle is spending time on the flats of Sarasota Bay, where deep grass areas are producing action on bluefish, ladyfish, macks and catch-and-release spotted seatrout.

Fishing shallow water flats where mangroves and oyster bars exist is resulting in some catch-and-release action on snook and redfish for Girle’s clients.

Also in Tampa Bay are mackerel, mangrove snapper and gag grouper. These fish are being caught around man-made reefs as well as wrecks and rock piles.

For the snapper and the macks, small shiners are working well. As for the gags, a free-lined pinfish or threadfin herring is irresistible.

Capt. Jason Stock reports offshore permit fishing is about as good as it gets. Sight-casting small crabs to schooling fish is resulting in instantaneous hookups. Targeting American red snapper also is proving prosperous. Stock and his clients are reeling up from the deep their limits of the tasty fish.

Along with American reds, Stock is finding some gag grouper and even a black grouper here and there. Amberjack are on the list, although they’re now catch-and-release.

Lastly, Stock is chasing tarpon along the beaches. Although the fish numbers have thinned out, Stock anticipates the fish to return soon for another run.

Capt. David White is targeting tarpon morning, noon and night. Patrolling the beaches, passes and bridges is White’s method to his tarpon madness. Baits such as crabs and threadfin herring are working well but, when the fish are finicky, White is prepared. He’s carrying an assortment of other baits — pinfish, large shiners and shad — that are sometimes needed to get a bite.

Jim Malfese at the Rod & Reel Pier is seeing decent numbers of catch-and-release snook arriving, and casting live shiners, pinfish or even ladyfish under the pier is resulting in some respectable-sized linesiders.

With the schools of small shiners taking residence around the pier, Malfese expects the mangrove snapper will increase in numbers. Some are being caught now, but many more are expected next month. Casting jigs from the pier is attracting an occasional mackerel or ladyfish. Again, with increasing numbers of bait arriving, the pier fishing will only improve.