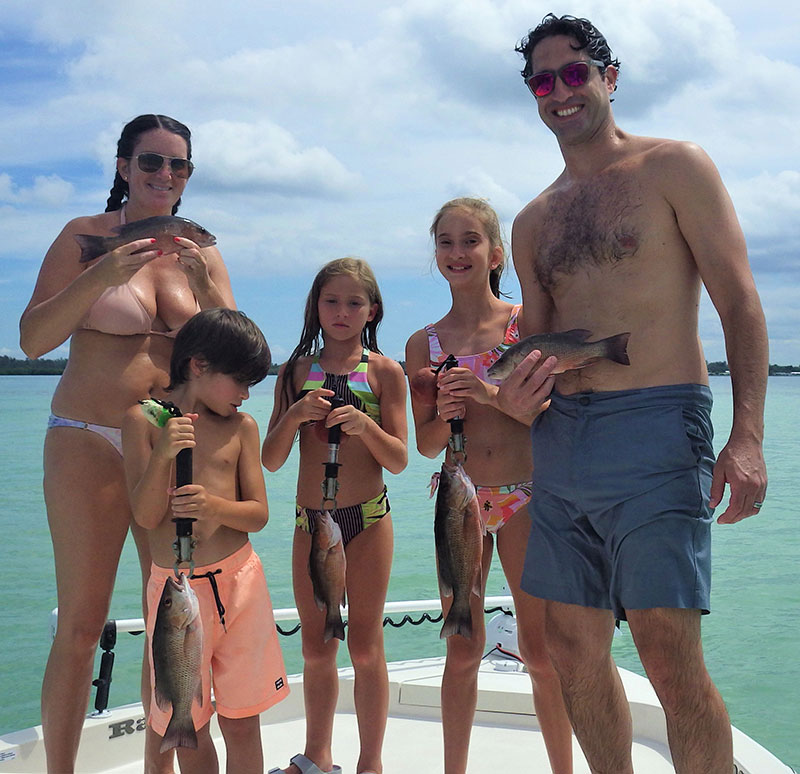 The DeMattia kids — Calvin, left, Lily and Isabella — and parents Nicole and Michael of Connecticut show some of their results on snapper and mackerel. They fished inshore June 22, using shiners as bait, on a guided trip with Capt. Warren Girle. 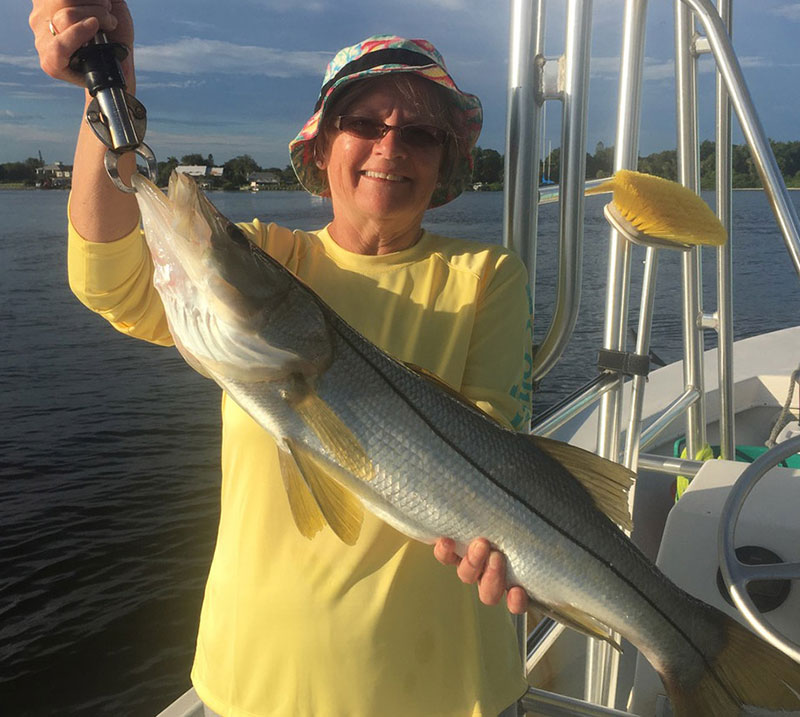 Judy Zeilenga of Indiana celebrates her retirement from the Indiana school system with a slot-size snook hookup while on a guided fishing trip with Capt. Danny Stasny of Southernaire Fishing Charters. This one measured 31 inches and was released after the trophy photo.

Fishing around Anna Maria Island remains hot and is only getting hotter as summer progresses.

Fishing inshore is yielding some great summertime snook fishing. It may be catch-and-release, but it’s great sport. Casting free-lined live shiners is the ticket, although I’m seeing some snook being hooked on live pinfish, too.

Catch-and-release spotted seatrout is following suit. Casting live baits over deep grass areas is resulting in many catches of these flats favorites. And, while the trout are biting, you can expect to hook into some ladyfish, jack crevalle and Spanish mackerel.

If you’re really lucky, you might come on a deep grass area that’s holding mangrove snapper. During the next few weeks, we should see greater numbers of mangoes appearing in the deep grasses and over structure in Tampa Bay.

Another option in Tampa Bay is shark fishing. Numerous sharks — all sizes and a variety of species — are frequenting our waters. The most apparent seems to be blacktips, but don’t be surprised if you run across some big bulls or hammerheads.

On my Southernaire charters, my clients and I are happy to see the arrival of mangrove snapper. The real numbers of fish have yet to arrive, but we’re finding some mixed in while targeting catch-and-release spotted seatrout over the deep grass areas of Tampa Bay. It’s nice to break out the fillet knife again for the mangoes. Along with the snapper and catch-and-release trout, I am seeing a mix of ladyfish, jack crevalle and Spanish mackerel, which adds a nice variety to the catch.

Catch-and-release snook fishing in Tampa Bay is quite good. Hook ups on 20-30 snook in the morning is the norm.

Lastly, targeting sharks is thrilling some anglers. Site casting to blacktip sharks in shallow water is the most exciting, although soaking baits on the bottom can yield larger species.

Capt. Warren Girle is working the flats of Sarasota Bay as the tarpon bite in the passes and on the beach is slowly diminishing. Where there are tarpon, Girle is catching them, but the bite is slightly tougher to come by than in weeks prior.

In the backwater of Sarasota Bay, Girle is finding plenty of catch-and-release spotted seatrout while drifting over deep grass areas. Mixed in with the trout bite are bluefish, Spanish mackerel, ladyfish and jack crevalle.

Fishing shallow areas in depths of 2-3 feet, Girle is instructing clients to cast live shiners along mangrove shorelines and oyster bars. By doing this, he’s leading his clients to some catch-and-release redfish.

Lastly, Girle is running the beaches for tarpon. With fewer numbers of fish available, he’s no longer experiencing 10 hookups a trip, but he’s managing to put anglers on two or three silver kings.

Capt. Aaron Lowman is putting anglers on mangrove snapper, gag grouper and Spanish mackerel over structure in Tampa Bay. For the macks and snapper, live shiners as bait are working well — especially the smaller, hatch bait. As for the gags, Lowman is finding success by trolling with deep-diving plugs.

Fishing the flats in Tampa Bay is proving to be good for Lowman. Plenty of catch-and-release snook are being caught during swift moving tides. The same applies for spotted seatrout. While targeting trout, Lowman’s fishers are catching a handful of mangrove snapper, as well as macks, jack crevalle and ladyfish.

Moving into the Gulf of Mexico, Lowman is finding a sporadic bite on bonito, permit and some snappers. The real crowd-pleaser is the blacktip shark in the same area.

Capt. David White says there’s a good bite offshore on snapper bottom dwellers — American red, mangrove and yellowtail snappers. Also in the mix are some large red and gag grouper. For bait, live pinfish and frozen sardines are getting the job done.

Moving inshore, White is putting his clients on some tarpon, although the bite is thinning out.

Finally, fishing inshore is resulting in some gag grouper around structure in Tampa Bay, where sportfishing for snook is proving to be quite good.

Capt. Jason Stock is mostly working offshore in the Gulf of Mexico. Targeting American red snapper is proving to be the highlight for his clients, with many catches in the cooler on his offshore charters. Along with the red snapper, Stock is putting clients on grouper and the permit fishing also is revving up offshore.

Moving inshore, Stock has been targeting tarpon along the beaches, as well as some large bull sharks. Gag grouper are the highlight in Tampa Bay.

Jim Malfese at the Rod & Reel Pier says anglers are reeling up and releasing some hefty-sized snook. Live shrimp, pinfish and ladyfish are working as bait. Fishers opting to use live shrimp are hooking up with mangrove snapper for their coolers and a few catch-and-release redfish.

Casting silver spoons or small jigs from the pier is yielding some action when the bait schools are present. Pier anglers can expect to hook up on Spanish mackerel, jack crevalle and ladyfish on the artificials.

If you plan to target or keep sharks caught from shore, including structures attached to shore such as jetties, bridges and piers, you are required to pass an online educational course found at myfwc.com/sharkcourse.

Once completed, you will be prompted to go to FWC’s online licensing system, where you can get an annual no-cost, shore-based shark fishing permit. You are not required to have this permit if you are fishing for sharks from a vessel.

The permit is required for all shore-based shark anglers age 16 and older, including those 65 and older who are normally exempt from needing a fishing license.

The permit also is required if you are 16 and older and plan to fish from shore for any species of fish and will be:

Anglers younger than 16 are not required to obtain the permit but are required to take the online educational course unless they are fishing with someone else who holds a shore-based shark fishing permit.