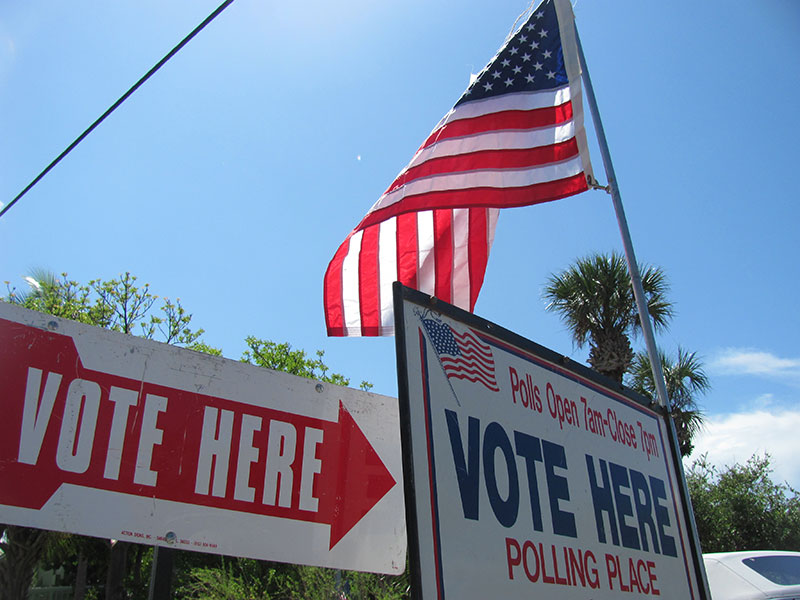 A waving flag and signs point the way to the polling location in Bradenton Beach. Islander File Photo

Qualifying opens for AM election, 1 of 3 joins race

Two city commission seats and the mayoral post are up for grabs in Anna Maria.

The window for qualifying to run in the election opened June 1, as The Islander went to press, and closes at noon Friday, June 12.

To qualify, candidates must submit paperwork and fees to the Manatee County Supervisor of Elections Office, 600 301 Blvd. W., Bradenton.

Only one of the three incumbents had committed to run as of May 28.

Commissioner Amy Tripp plans to seek reelection on the Nov. 3 ballot. She was elected to her first full two-year term in 2018 after being appointed to complete the remainder of Commissioner Nancy Yetter’s term earlier that year.

Mayor Dan Murphy did not respond to a May 27 email from The Islander. He previously said he was undecided.

Commissioner Mark Short also did not respond to a May 28 email from The Islander. Short was appointed in September 2019 to complete the remainder of Commissioner Brian Seymour’s term.

No candidates had submitted paperwork or qualification fees as of May 28, according to the SOE.

For more information, visit the SOE website at votemanatee.com.

Editor’s note: Anna Maria Mayor Dan Murphy wrote in a June 1 email to The Islander that he will run for reelection in November. If he wins, he will serve his fourth consecutive term at the mayoral post.

At least one of two Bradenton Beach commissioners wants to keep the job.

Commissioner Ralph Cole told The Islander May 28 that he will seek reelection as Ward 4 commissioner on the Nov. 3 city ballot. Cole picked up qualification forms from the Manatee County Supervisor of Elections Office the same day.

He was elected to the commission in 2015 and lost his bid for reelection in 2017. However, the commission appointed him to complete the remainder of the John Chappie’s vacated commission term after won the mayor’s seat in the same election.

Ward 4 is bordered by Sarasota Bay, the Gulf of Mexico, Cortez Road and the southern property line of Runaway Bay condominiums and Lacosta condominiums near 17th Street North.

The other city commission seat up for election is held by Marilyn Maro in Ward 2. She did not respond to a call May 28 from The Islander.

Maro began as a commissioner in 2016, when she won a card draw over Anne Leister after a deadlock in the commission-appointed seat. If she runs and wins reelection, she will serve her third and final consecutive term as commissioner due to the city’s term limits.

The qualifying window for Bradenton Beach’s election will open at noon Monday, June 8, and close at noon Friday, June 12.

Commissioners are paid $400 a month, and the election assessment fee for commission candidates is $48, which must be paid from a campaign bank account.

There are 739 registered voters in the city.

The incumbents are running, but will there be challengers?

The qualifying period for candidates will start at noon Monday, June 8, and end at noon Friday, June 12.

The mayor serves a two-year term and is paid $26,000 annually, plus $520 per year based on cost of living adjustments.

Commissioners also serve two-year terms and each receives a $7,690 annual stipend, with $130 added for COL.

Commission candidates must be registered Manatee County voters who have lived in Holmes Beach for one year as of the qualifying date.

The qualifying fee for mayor is $240, and for commission candidates is $60, or 1% of the salary, and signatures from 15 registered Holmes Beach voters in the last general election at a cost of 10 cents per signature.

Additionally, if a candidate completes an undue burden affidavit form and obtains 15 petition signatures, the fee will be eliminated.

Candidates must appoint a campaign treasurer and open a campaign bank account in order to pay fees.

The path to elected office

Prospective candidates for city commission seats or a mayoral post in the cities on Anna Maria Island are required to:

Prospective candidates can pick up an election packet with the required forms and guidelines for complying with the elections regulations at their city hall or the Manatee County Supervisor of Elections Office, 600 301 Blvd. W., Bradenton.

Qualifying paperwork must be submitted to the SOE by the stated deadline.

Go to votemanatee.com for more info.