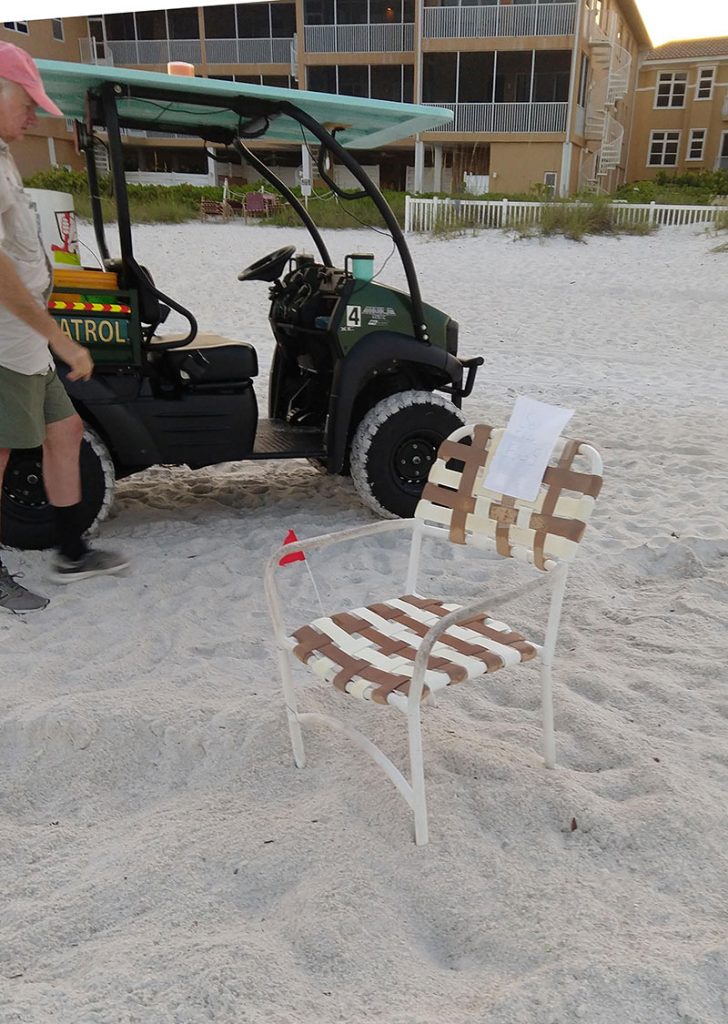 Skip Coyne, AMITW volunteer, investigates a sea turtle nest marked by a red flag June 1. A well-meaning note on the chair read, “Sea turtle eggs,” but the chair leg nearly punctured some of the eggs in the nest. Islander Photos: AMITW 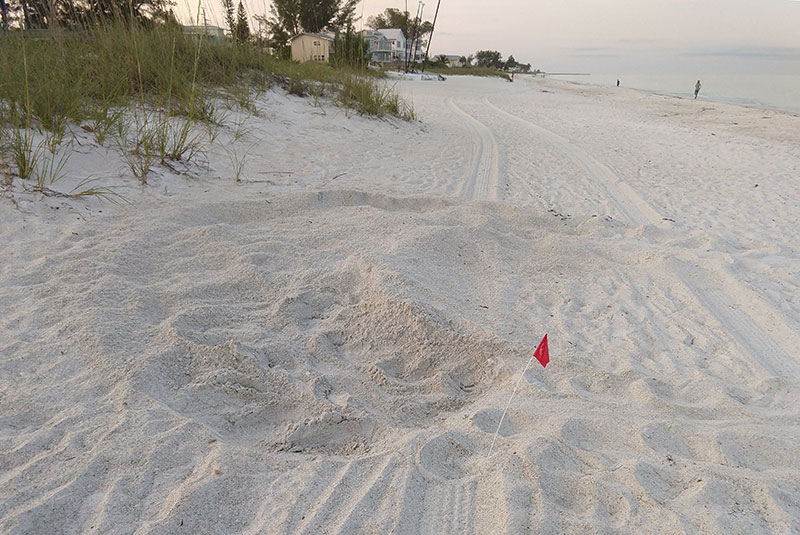 Tracks and a swirl of sand indicate a loggerhead nest laid overnight June 1 in Bradenton Beach.

Sea turtles are taking to the beaches of Anna Maria Island.

“We aren’t missing anything,” Suzi Fox, AMITW executive director, said June 3. “We are well-trained to spot crawls after it’s rained.”

She said rain can help volunteers locate nests, because it washes away footprints and other markings made by people and animals near the tracks.

Rain or not, human interference is a concern for Fox.

She said there have been five adult sea turtle disorientations, likely caused by people walking alongside turtles looking for spots to deposit their eggs in the sand.

Sea turtles only come ashore to nest, so distractions can lead to failed nesting attempts.

“We know people want to watch them, but they have to stay back and let the turtles do their thing,” Fox said.

She also said people have been marking nests with chairs and other items.

Turtle watch volunteers June 1 found a nest under a chair. Someone had written a sign, “Sea turtle eggs” and attached it to the chair. Fox said one chair leg came close to puncturing an egg, which could have destroyed the clutch.

People may be trying to help, but the best they can do is stay back and not disrupt the environment surrounding a nest, she said.

At a nest, AMITW volunteers find clues, including tracks and other markings, that provide data for government agencies.

On Anna Maria Island, turtle watch is funded by the county to record data in order to comply with requirements of beach renourishment permitting.

Turtle watch volunteers patrol the beach by ATV each morning May-October to look for tracks and other signs of new nests. AMITW volunteers also monitor the nests until they hatch, to collect data on hatchlings.

Nests laid on beaches in Bradenton Beach and Holmes Beach are being relocated out of the way of an upcoming Manatee County beach renourishment project, from 78th Street in Holmes Beach south to Longboat Pass. Nests laid in Anna Maria are noted, but left undisturbed, as data is not being recorded outside the project zone.

As of June 7, AMITW reported 108 loggerhead nests — up from 60 nests one week prior — on beaches within the renourishment area.

For more information about turtle watch, people can visit the AMITW website at islandturtlewatch.com or contact Fox at 941-778-5638 or suzilfox@gmail.com.