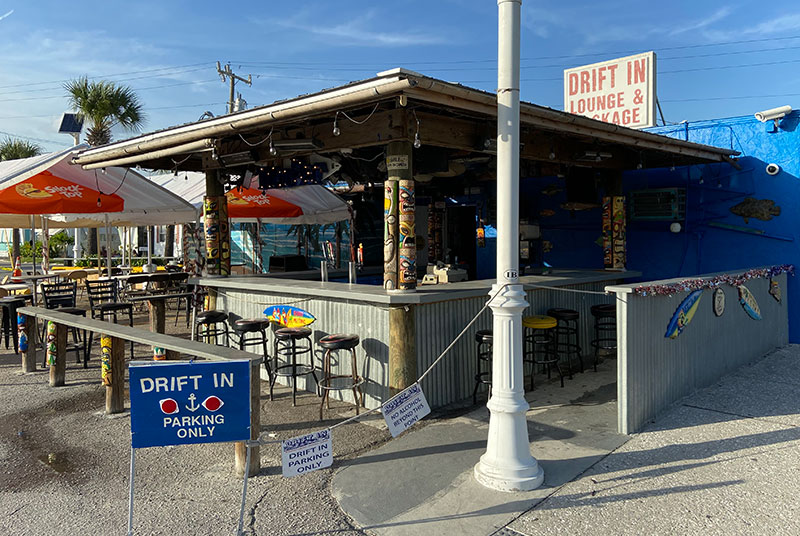 Joe Cuervo, owner of the Drift In, 120 Bridge St., Bradenton Beach, said July 2 that he and several other local bar owners, including the owners of the Anchor Inn in Holmes Beach and the Gator Lounge in Bradenton, were considering a class-action suit against the state so their businesses could resume operations.

The Florida Department of Business and Professional Regulation issued an emergency order June 26 prohibiting bars — establishments that derive more than 50% of gross revenue from selling alcoholic beverages — from providing alcohol for on-premises consumption to slow the spread of COVID-19.

The DBPR amended the order July 1 to allow bars licensed to sell food to sell alcoholic beverages for on-premises consumption in time for the July 4 weekend.

The Doctor’s Office, 5312 Holmes Blvd., Holmes Beach, is the only cocktail bar on Anna Maria Island with a food service license. However,  owner Sean Murphy closed the Doctor’s Office for the holiday weekend, but was serving cocktails and food at Eat Here, 5315 Gulf Drive, while his original restaurant, Beach Bistro remained closed.

Five island bars — including the Anna Maria Island Moose Lodge, Drift In and Sports Lounge in Bradenton Beach and the Anchor Inn and D.Coy Ducks in Holmes Beach — lack food licenses, according to the DBPR’s website, www.myfloridalicense.com.

Tommy Knockers, 111 Seventh St. N., Bradenton Beach, applied for a food service license, but the DBPR had not approved the application as of July 3.

Meanwhile, the DBPR is allowing restaurants with licenses to serve cocktails, beer and wine.

“It’s unfair,” Cuervo said. “If they’re going to shut something down, let’s be fair. Let the restaurants serve their food, but shut the alcohol down.”

He said he retained an attorney, who told him they had a good case because of the state’s “discriminatory” policy differences between bars and restaurants.

While the prohibition of on-premises consumption continues, bars such as the Drift In resorted to take-out service to keep afloat. The establishments, however, have struggled on take-out service alone.

“It’s not even covering the cost of the employee coming in to serve the people,” Cuervo said. “I’m still losing money. I’ve lost hundreds of thousands of dollars, and we’re not going to stand by and let this happen again.”

He said his business stands no chance when, across the street, restaurants such as the Bridge Tender Inn, 135 Bridge St., Bradenton Beach, can serve alcoholic beverages, food and host live music.

“It’s just devastating,” Cuervo said. “We barely made it through the first shutdown. I don’t know how long I can hold out.”

Murphy said July 2 his Doctor’s Office also was “just squeaking by” due to the pandemic.

“We are not going to be seating anybody indoors for some time, until I see some sort of change,” he said.

Murphy called the state’s distinction between on-premises consumption of alcoholic beverages at bars and restaurants arbitrary.

“DeSantis is an idiot,” he said. “The distinction is rather arbitrary. I think we have restaurants right now that are operating like bars and are crowding too many people inside and out.”

Regarding Cuervo’s proposed class-action lawsuit, Murphy said he was “watching the situation, but has not taken action.”