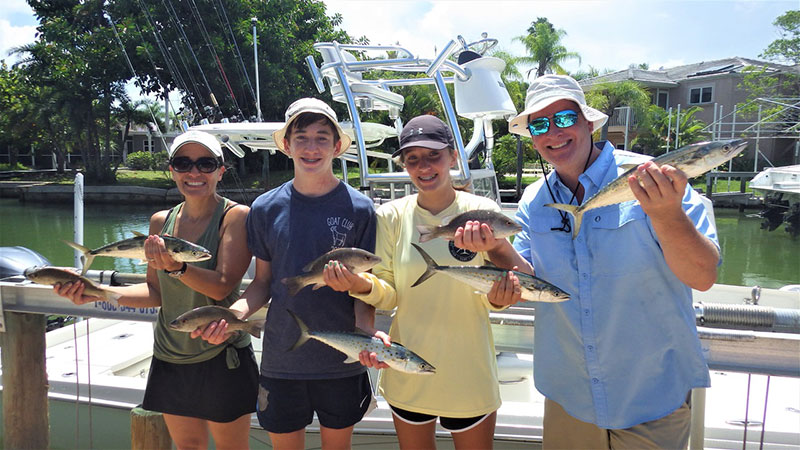 Fishing around Anna Maria Island is improving as we ride the tail end of the full moon.

With strong tides and clean water, all varieties of fish are apt to find their way to a baited hook.

Inshore fishers are producing sizzling action on catch-and-release snook and trout, as both species are readily feeding and taking the hook in great numbers.

Spanish mackerel are being caught frequently, especially since the large schools of hatch bait have arrived.

The highlight of the past week was the arrival of mangrove snapper. Triggered by the hatch bait, these popular fish have infested every bit of structure in Tampa Bay and are flooding onto the grass flats.

Moving offshore, American red snapper are the dominant bite and limits are being caught daily.

Mixed in with the ARs are yellowtail and mangrove snapper, as well as red and gag groupers.

Some large permit also are being caught offshore.

On my Southernaire charters, I’m seeing many mangrove snapper being reeled up. With small shiners as bait, the snapper just can’t resist the hook. Fishing structure is working well, although I’m seeing plenty being caught over the deeper grass, too.

In the deeper grass areas, I’m also seeing plenty of catch-and-release spotted seatrout on the hook in addition to jack crevalle, ladyfish and Spanish mackerel.

Catch-and-release snook fishing is going strong, with many catches during morning incoming tides. Outgoing tides are producing good action in areas where deep water is present, close to the shoreline where oyster bars or mangroves exist.

Despite all of the good fishing, I recommend steering clear of Sarasota Bay for a while. There was a spill in the area of Long Bar, which has released 26 million-28 million gallons of raw sewage.  Although the break in a sewage line was repaired, it occurred June 17-30.

These impacts on the bay are unacceptable and, hopefully, whatever party is responsible will be held accountable.

But when is this going to end?

People come to our area for the environment — the bays and beaches, the wildlife, marine life and their habitat. When the flora and fauna are finally ruined from misuse and lack of management, where will we be?

What an unfortunate occurrence.

Other species taking shrimp on the hook include jack crevalle, ladyfish and catch-and-release snook.

Casting spoons or jigs from the pier is yielding Spanish mackerel. This bite is best when the large bait schools are present around the T-end of the pier.

Capt. Warren Girle is taking clients to structure in Tampa Bay, where free-lining live shiners over reefs, rockpiles and wrecks yields a variety of species — mangrove snapper, gag grouper and Spanish mackerel. Jack crevalle and ladyfish are in the mix. This bite provides great action on light spinning tackle and with the snapper in the mix, it allows anglers to take something tasty home for dinner.

Moving to the grass flats, Girle is finding a good bite on catch-and-release snook and spotted seatrout.

Capt. Aaron Lowman is spending mornings targeting mangrove snapper in the Gulf of Mexico and Tampa Bay. Areas where hard bottom or structure — reefs or wrecks — exist are producing the best action. These areas are host to a variety of other species — gag grouper, mackerel and permit. And targeting sharks along the beaches is producing some good action for Lowman’s clients. Using chunks of fresh-cut mackerel, bonito or ladyfish is working well as bait for the shark bite.

On the flats, Lowman reports catch-and-release species — snook and spotted seatrout — are being caught in good numbers during swift moving tides. For these fish, free-lining live bait — shiners and pinfish is attracting a bite.

Capt. Jason Stock is finding plenty of action for his anglers offshore in the Gulf of Mexico. With calm, clear waters Stock can travel with ease to deep water offshore. Bottom fishing in areas where hard bottom exists is resulting in many American red snapper for the coolers, as well as gag grouper and red grouper. Mangrove and yellowtail snappers also are present, which can add up to quite a feast if the anglers take their fish home.

Numerous sharks are patrolling the offshore waters —when every so often they devour the catch right off the hook as they are being reeled up to the boat.

Lastly, the highlight of Stock’s past week was an 80-pound wahoo. This is a special treat — mostly wahoo are not found in our waters — but are more common on the east coast of Florida. Nice work, Jason!

Capt. David White is seeing red this week — and by red, I mean American red snapper. The offshore red snapper bite is hot and heavy right now and White is all over it. For bait, live pinfish are working. Frozen baits — threadfin herring or Spanish sardines — are working well, too. Mixed in with the bite are gag and red grouper as well as mangrove and yellowtail snapper. It must be time for a fish fry.