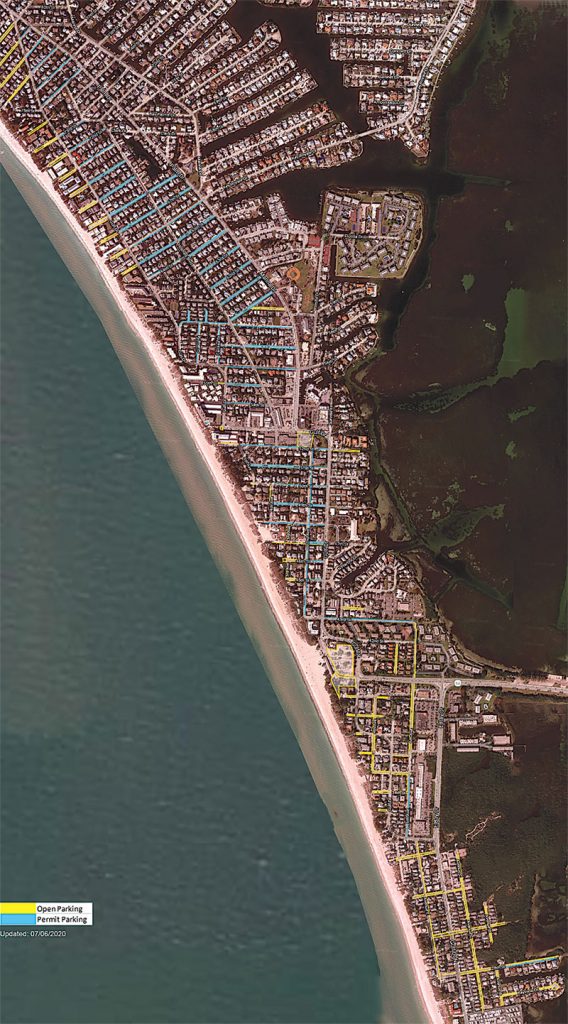 Holmes Beach is considering revising its parking plan to include resident-only parking in the blue zone on the map. The yellow zone depicts areas where parking is unrestricted. Islander Courtesy Graphic 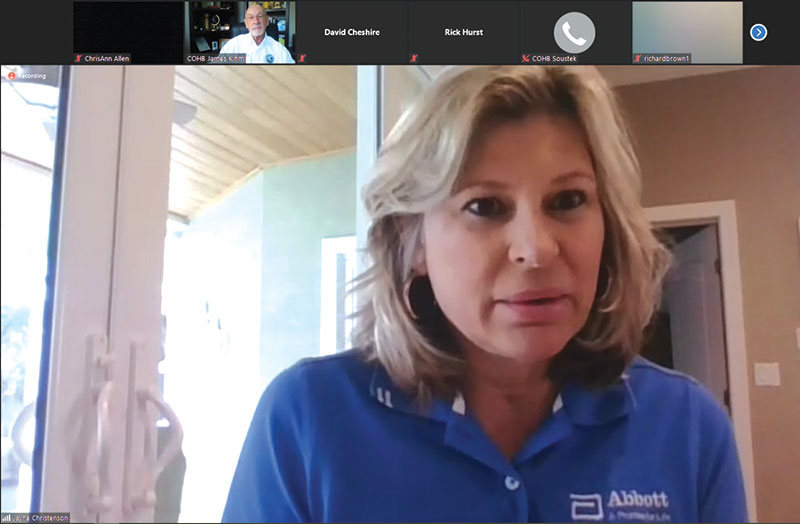 Holmes Beach has plans to try out a new permit-only parking zone.

In late April, on-street parking in the city was reduced by about 1,100 spots to minimize congestion, trash and noise caused by day-trippers in neighborhoods near beach accesses, based on the recommendations of Police Chief Bill Tokajer.

The chief was tasked with a survey of parking and recommendations for closing parking areas by Mayor Judy Titsworth.

The public reaction — both for and against the reduction in on-street parking — was strong.

So the city continued to work on a plan to bring back more parking, but with regulations.

At a teleconferenced commission meeting July 7, commissioners held a public hearing and unanimously approved the first reading of an ordinance creating a “parking-by-permit-only zone.”

Commissioners also reached a consensus to set the parking fine at $75, an increase of $25 from the current fine of $50.

If approved on final reading, residents and owners would obtain decals for parking 9 a.m.-5 p.m. in 619 spots of the spaces that were removed when parking was limited for the coronavirus beach closures.

After 5 p.m., parking in the zone would be open to the public.

Full-time residents with proof of residency could obtain decals for all vehicles registered to the address, and low-speed vehicles would be included in the permit plan.

Seasonal renters would be considered on a case-by-case basis, according to Tokajer.

Vacation rental owners — individuals or businesses — would be allowed two decals for themselves, not to be shared with renters, and permits would be nontransferable to other vehicles.

Unlicensed golf carts would not require a permit and could park in permit zones, as they mostly are owned by people who live in the city, according to Tokajer, but licensed low-speed vehicles would be part of the permit program.

Commissioner Pat Morton said residents should not have to pay for parking decals.

Commissioner Carol Soustek agreed with Morton and also suggested the parking fine be raised to $75, a $25 increase from the current $50 fine.

Commissioner Kim Rash said the increased parking fine could cover the cost of the decals, and the rest of the commission agreed to the proposal.

Jayne Christenson, a city commission candidate on the ballot in the upcoming election, said she supports the plan but suggested the city enforce the permit-parking zone around the clock.

She said that by allowing open parking after 5 p.m., “you just bring back the problem you are trying to solve,” adding that the ordinance addresses parking for parties and events.

Tokajer said people usually have parties after 5 p.m. and, after COVID-19 eases up, more residents might plan evening activities that put a demand on guest parking. He also said the sunset crowd does not bring nearly the traffic of day-trippers.

Former Commissioner Rick Hurst, who also is running for a seat on the city commission in the November election, agreed with Tokajer and supported the 9 a.m.-5 p.m. hours.

“Let’s try to eliminate people having to call the police to say they are having friends over,” he said.

Commissioners considered a six-month test period for permitted parking but opted to hold a town hall for resident feedback and review the parking plan before the end of 2020.

City attorney Patricia Petruff said she would prepare an ordinance to increase the parking fine for a future meeting.

The commission will hold a public hearing and vote on the final reading of the permit-parking zone ordinance at 6 p.m. Tuesday, July 21, during its meeting at city hall, 5801 Marina Drive, or by teleconference, with instructions on the city website at holmesbeachfl.org.