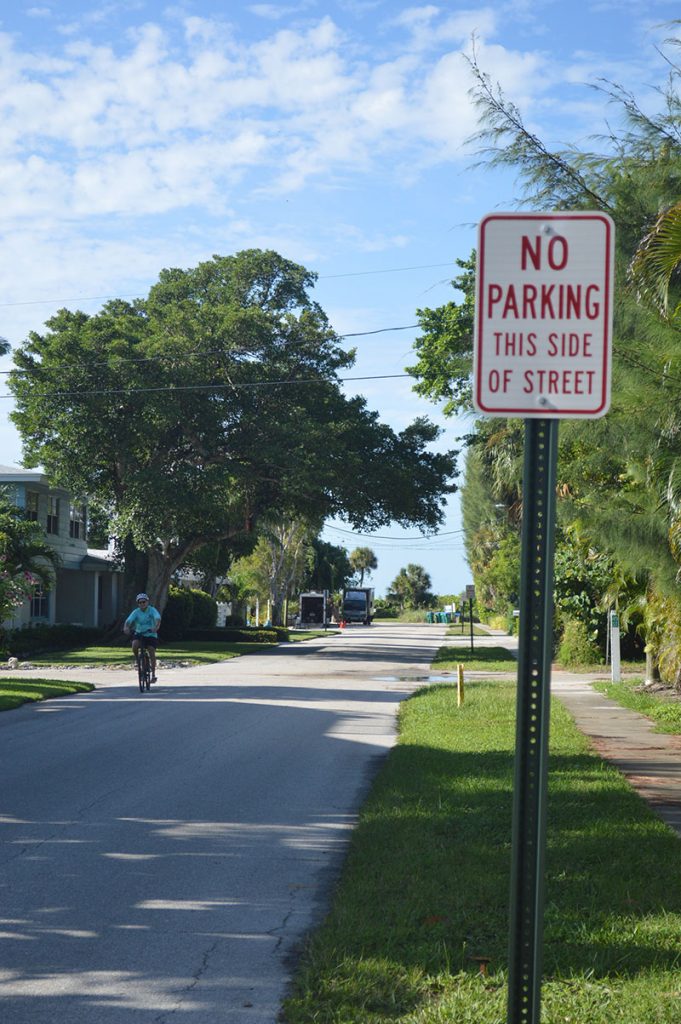 Parking along the east side of Second Avenue near the Church of Annunciation in Holmes Beach from 43rd to 52nd streets will be reinstated as permit-only parking, while parking on the west side will remain closed under an ordinance passed July 22. Islander Photos: ChrisAnn Allen 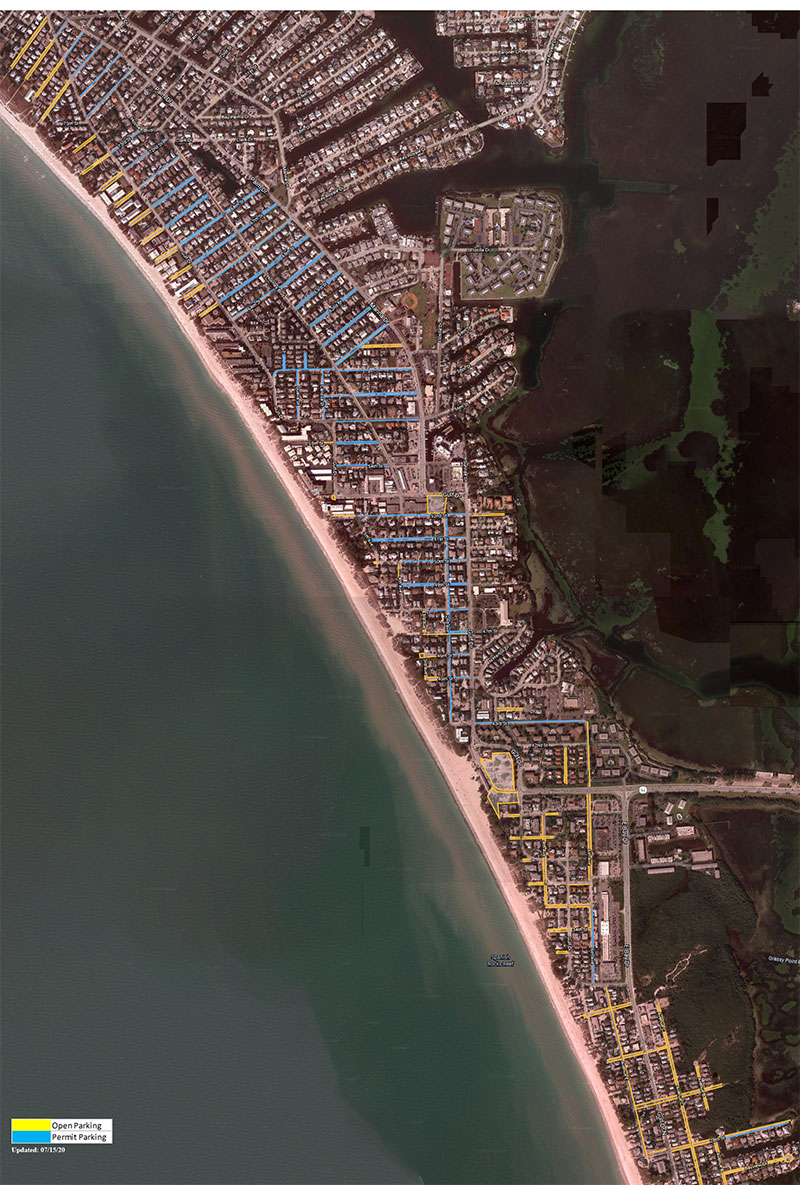 Holmes Beach revised its parking plan to include resident-only parking in the blue zone on the map. The yellow zone depicts areas for open parking. Islander Courtesy Graphic 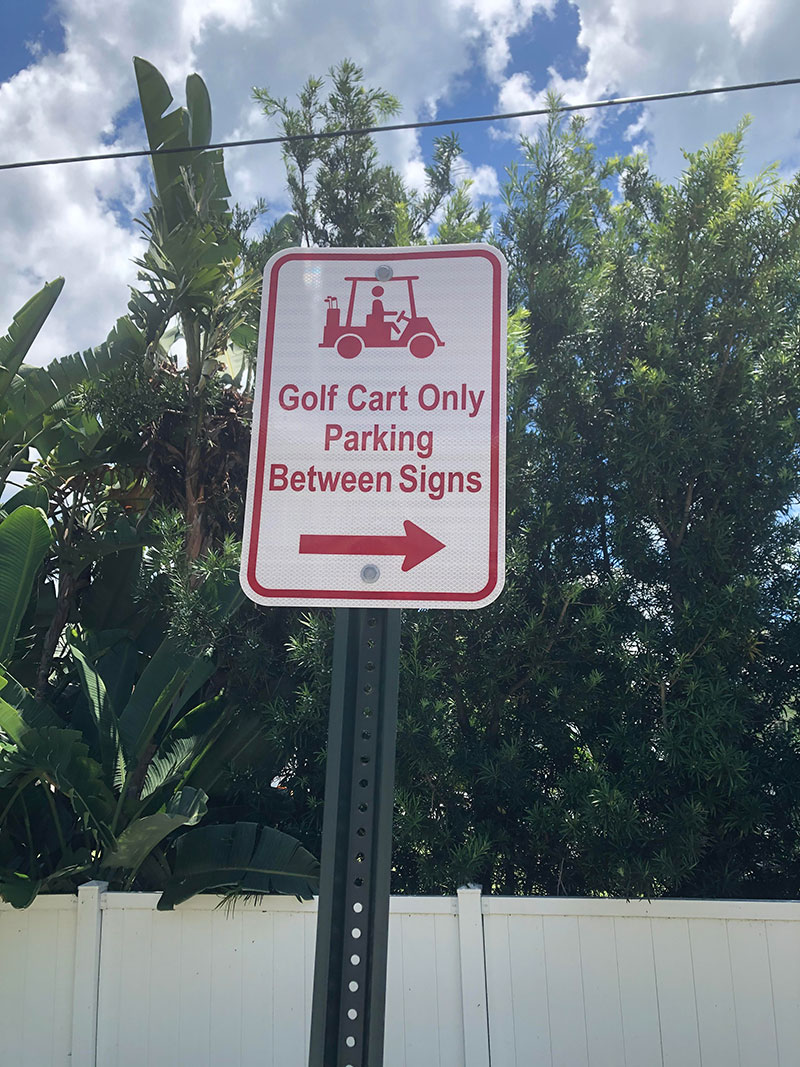 Parking spots for golf carts are posted on 46th Street in Holmes Beach, while some areas are posted for permit parking for residents and some streets have open parking.

Ownership now has a privilege in Holmes Beach.

The city will be offering preferential beach parking spots for residents and property owners.

For a cost of $15 per vehicle, residents and owners can obtain decals for parking 9 a.m.-5 p.m. in 619 spots that were first prohibited when the public beach opened following coronavirus closures.

The zone is undergoing a six-month test period, with the application process beginning within 90 days of adoption of the ordinance.

In late April, after an evaluation by Holmes Beach Police Chief Bill Tokajer at the direction of Mayor Judy Titsworth, on-street parking in the city was reduced by about 1,100 spots to minimize congestion, trash and noise caused by people parking near beach accesses.

Tokajer had said the reduction was temporary while options for an updated parking plan were considered.

When the first reading of the ordinance unanimously was approved July 7, commissioners also reached consensus to increase parking fines to $75 from $50, which would be considered in a separate ordinance.

The commission agreed the increased parking fine could cover the cost of the decals, so residents and owners would not have to pay to park.

However, at the July 21 meeting, the mayor, commissioners and Tokajer debated whether people should pay for the decals and the parking fine increase was not on the agenda.

Kihm said residents who used to have access to parking on their streets should not be burdened with the cost of the program. Rash agreed.

Titsworth said if the decals are free, everyone will want one for each car, which creates more work for staff.

She also said permit parking is an “added benefit” for residents and, earmarking parking ticket money for permit zone parking is not politically correct.

Schaefer said he considered the cost a “user fee.”

After 5 p.m., parking in the zone will be open to everyone.

Full-time residents, with proof of residency, can obtain decals for all vehicles, including low-speed vehicles, registered to the address are included.

Seasonal renters are to be considered on a case-by-case basis, according to Tokajer.

Vacation rental owners — individuals or businesses — are allowed two decals for themselves, not to be shared with renters, and permits are nontransferable.

Unlicensed golf carts will not require a permit and could park in permit zones, but licensed low-speed vehicles are part of the permit program.

Some golf cart and low-speed vehicle parking also has been designated by signage in restriction-free parking areas.