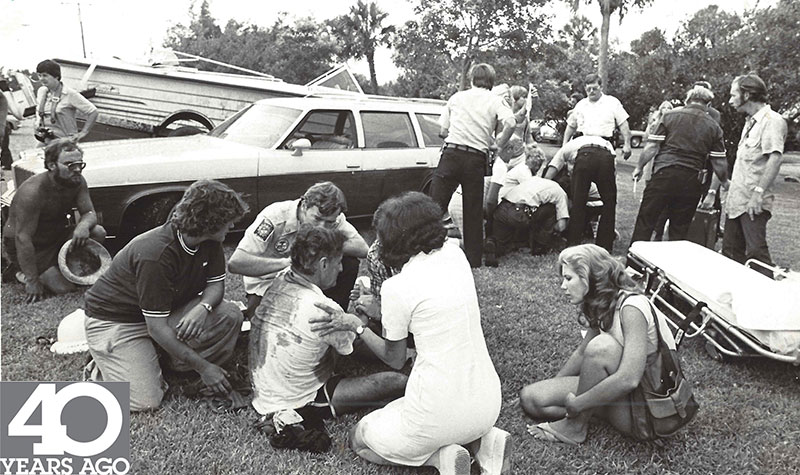 Emergency personnel and bystanders respond Aug. 1, 1980, in Holmes Beach, to a crash where three people were fatally shot and one person was injured. The case remains unsolved. Islander Photo: Collection of June Alder 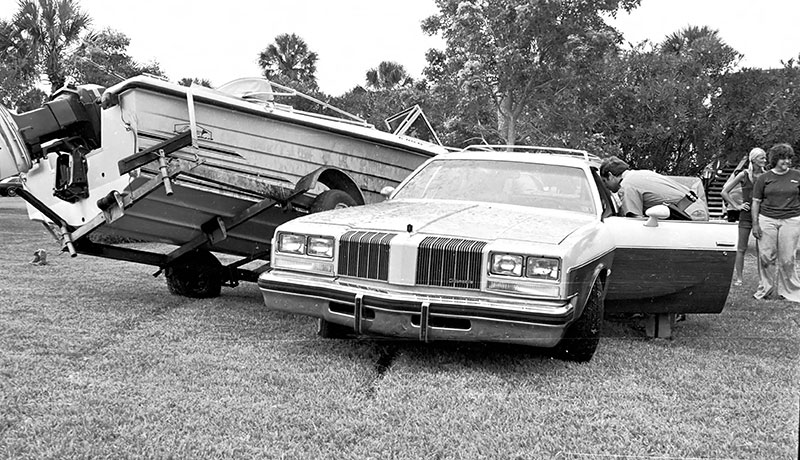 “I saw a car and boat trailer jackknifed near a power pole,” reporter June Alder wrote about her arrival to the scene of a quadruple murder Aug. 1, 1980, on Manatee Avenue at East Bay Drive in Holmes Beach. 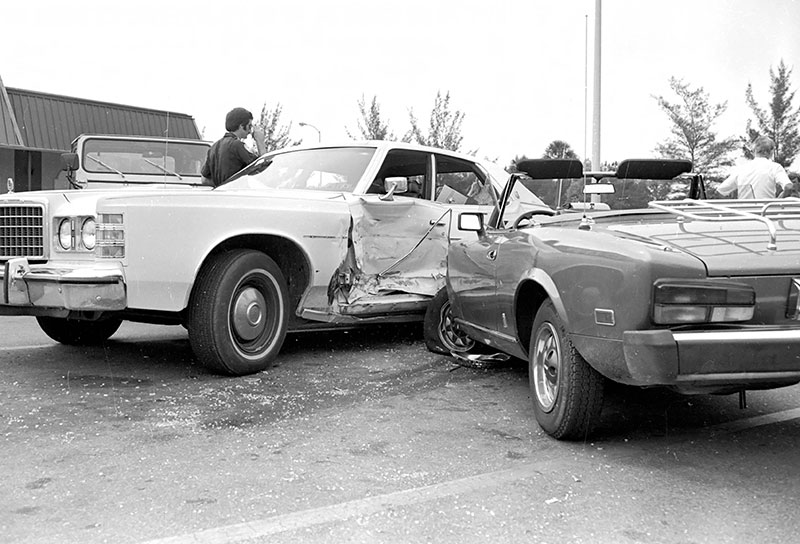 A Fiat that had been driven by Robert Matzke crashed into another vehicle at Foodway. Bystanders thought an accident had occurred, but Matzke, a retired Air Force colonel, had unknowingly confronted a killer and was fatally shot. 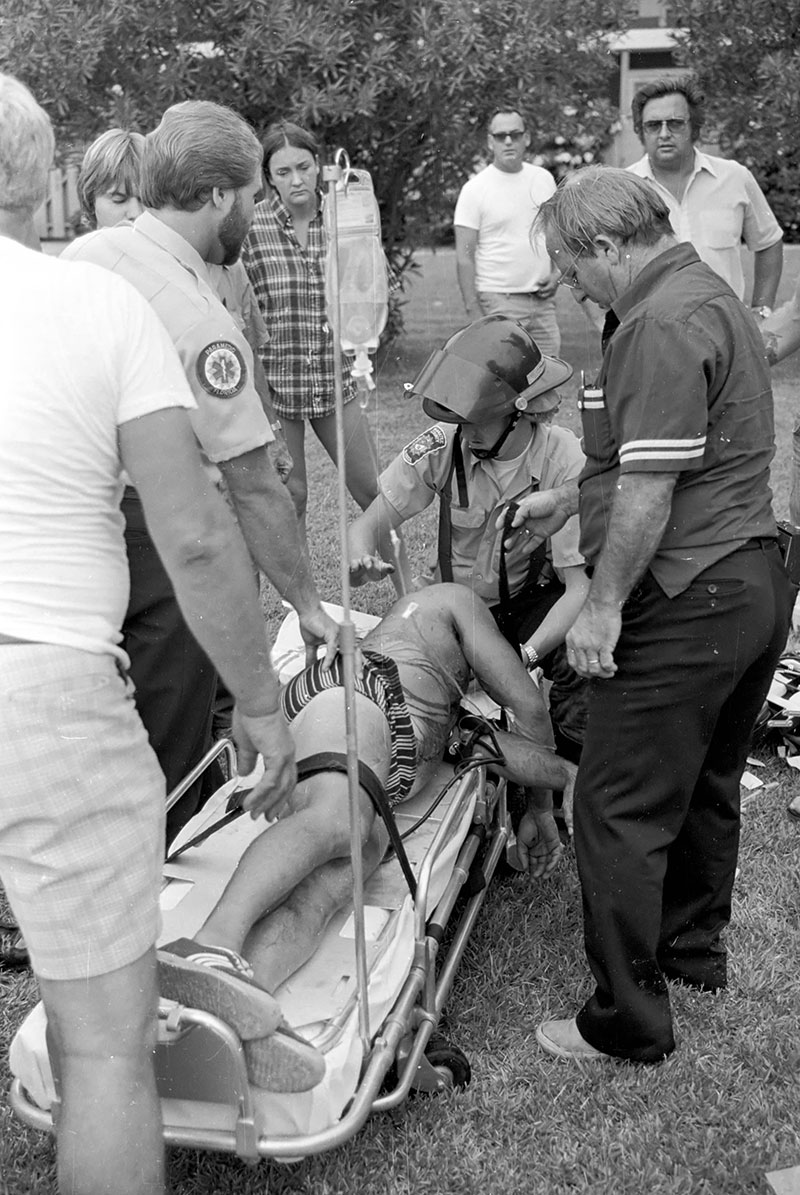 Emergency personnel place a man on a stretcher at the scene of a crash near the Kingfish Boat Ramp Aug. 1, 1980. The four murders that occurred that day remain unsolved. 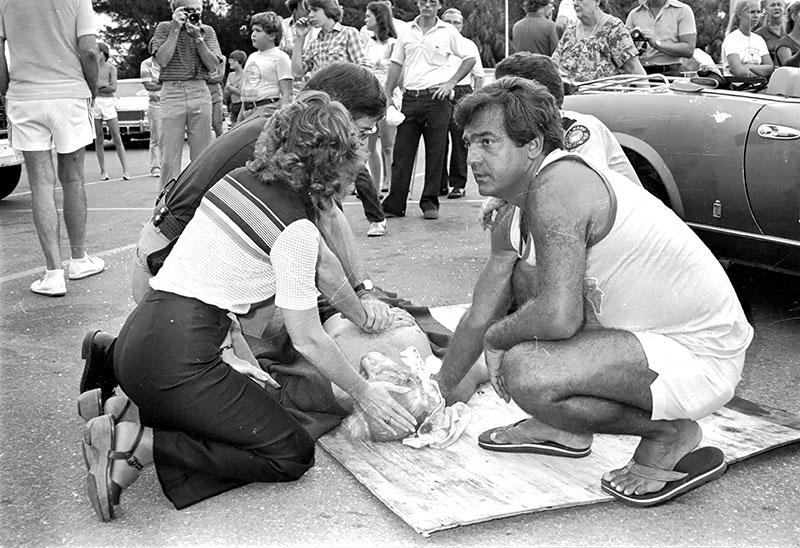 Good Samaritans and emergency workers respond Aug. 1, 1980, in Holmes Beach, to the fourth gunshot victim in the parking lot of the grocery store. The case — the Kingfish Boat Ramp killings — remains unsolved. Do you remember that day? Please, share your recollections with The Islander online or by email to news@islander.org. Islander Photos: June Alder, The Islander, Manatee County Public Library

From The Islander archive, circa 1999

As I recall, I was the only reporter in The Islander office when someone yelled at me to pick up my phone. It was my mother calling.

Her voice was odd, whispery but urgent.

“I’m down here at Foodway (now the Publix Super Market). There’s been an accident or something — a man’s been hurt.”

I grabbed my camera and jumped in my car. It took me less than five minutes to round the bend at the Manatee Public Beach. That’s when I saw people milling around just east near Kingfish Boat Ramp.

I saw a car and boat trailer jackknifed near a pole. I parked my car and raced over to a scene of chaos.

Sheets were draped over two figures being lifted onto stretchers. They appeared to be children.

A few feet away from the car, medics bent over a man stretched out on the ground.

Close by lay a deeply tanned man in red-and-white striped (swim) trunks. He was barely breathing. I could tell by the look on the face of a woman in a nurse’s uniform holding his head that he was close to death.

I moved in a bit closer with my camera. Through the viewfinder, I could see a small hole — about the size of a dime — in the man’s forehead.

Across the street at the Foodway, an ambulance was pulling out. A man had been shot there, too.

I was beginning to realize the enormity of the crime that had shattered the pleasant afternoon.

Early Aug. 1, 1980, Juan Dumois, a Tampa physician, his sons Eric, 13, and Mark, 9, and their uncle, Raymond Barrows, vacationing from Miami, left the boat ramp for a fishing trip.

Returning about 5 p.m., they loaded their boat onto a trailer that was hitched up to their station wagon. Dumois and Barrows got into the front seat, and the boys took seats in the back. Just as Dumois was about to drive off, a man stuck his head in the car window. He had sprained his ankle and asked for a lift.

The man hoisted his bike into the boat and got into the back with the boys before Dumois pulled away. The station wagon had gone only a few yards when the man pulled a gun. He shot Dumois, then Barrows, then the boys.

The man turned off the ignition, steered the car to the side of the road and then rode his bike toward Foodway.

Retired Air Force Lt. Col. Robert Matzke, working in the yard at his Westbay Cove North condo, had observed the man leaving what appeared to be a crash.

He pursued him to the Foodway in his sports car. There, Matzke argued with the bicyclist. Again, a shot rang out, and Matzke became the hitchhiker’s fifth victim.

Shoppers were unaware as the gunman got into a waiting car that disappeared into traffic.

All the police had to go on was what Barrows was able to tell them. He had recovered, but died of a heart attack a couple of years later.

The investigation dragged on for months. artist’s conceptions of the killer were circulated, a reward was offered and more than 100 suspects were questioned, but no solid evidence pointed to a killer.

Was he a contract killer?

He shot to kill and had a confederate waiting in a getaway car.

Investigators over the years have said the only chance for a solution is that someone will talk.

Will we ever know the killer’s identity or the reason for the massacre on that bloody Friday?

Editor’s note: This story about the slaying of four people in Holmes Beach on Aug. 1, 1980, published in The Islander in 1999. June Alder worked for both papers, the old and new Islanders, including the time when the murders occurred.

One thought on “Looking back: Killing spree at Kingfish”