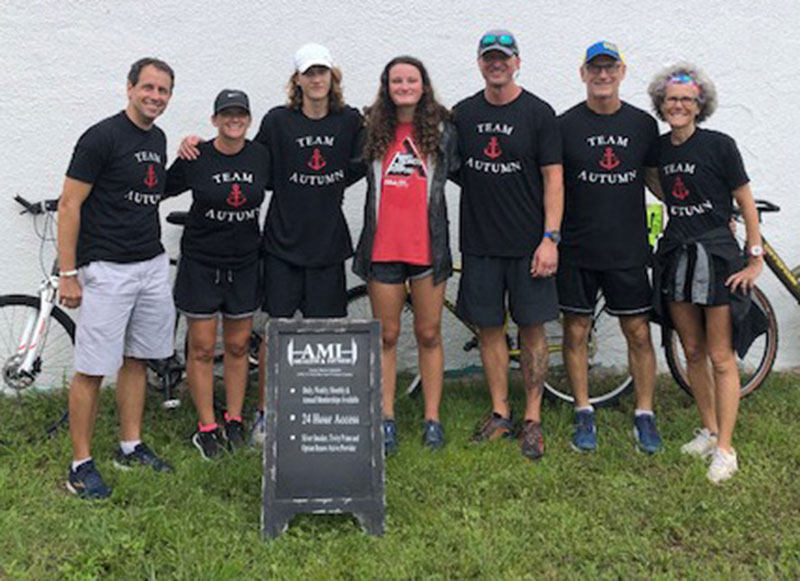 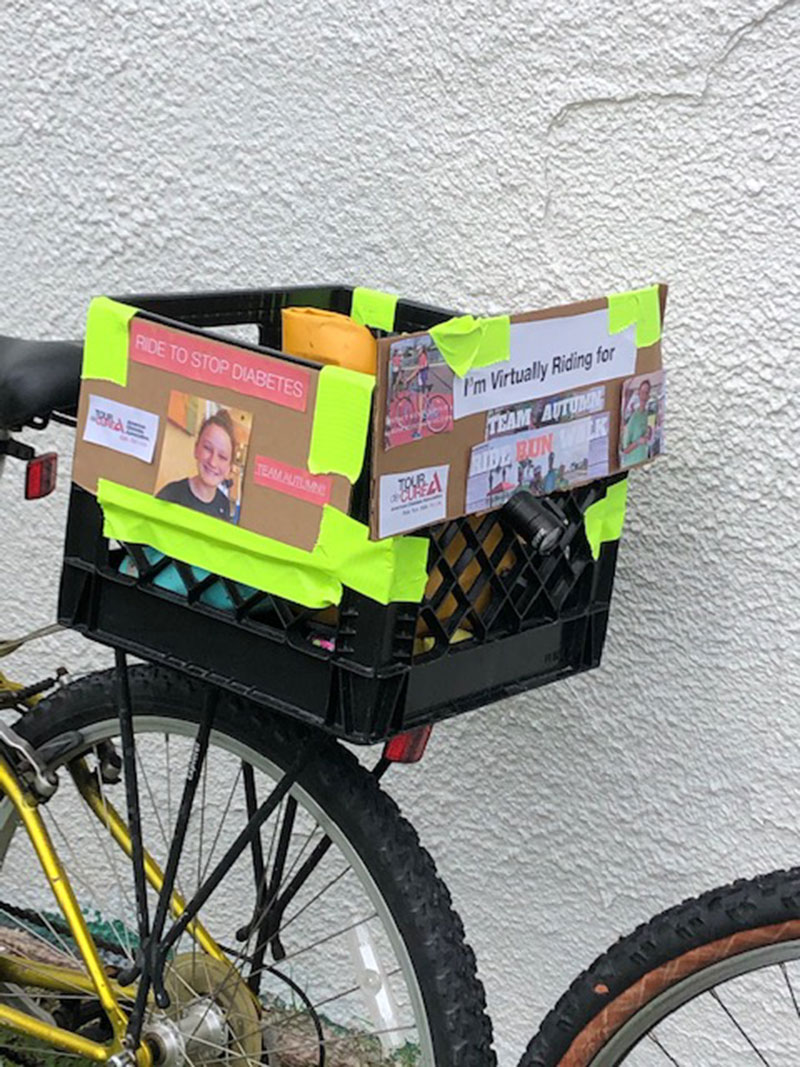 A bicycle basket promotes the cause for Team Autumn in the event to fight diabetes.

It was a family — and friends — affair.

Some Holmes Beach residents, family and friends recently teamed up to take part in the American Diabetes Association’s annual Tour de Cure event. The event, which took place June 13,
generates awareness and raises funds to support medical research, advocacy and  education programs for the millions of Americans living with diabetes.

Team Autumn was formed to support a cause near and dear to Wendy Kovich and her family. Wendy’s father, David Kapanjie, is a Type 1 diabetic, while Wendy and husband Eric’s 15-year-old daughter, Autumn, was diagnosed with diabetes when she was 4 years old.

This was Team Autumn’s fourth year participating in the event, which was held remotely this year due to COVID-19 concerns. Their ride, which took place on Anna Maria Island, was broadcast live on Facebook and tracked with a GPS watch.

In previous years, Team Autumn participated in a St. Petersburg-based event, considered the Southwest Florida base for the Tour de Cure.

Autumn’s team was sponsored by Jen Sekel, owner of AMI Health & Fitness, and they completed the 10-mile ride using the Holmes Beach fitness center as the start and finish line for the race.

When asked what the event meant to Autumn, Wendy Kovich wrote in an email to The Islander July 25 that for Autumn it shows hope for a cure when so many people support the cause.

Kovich thanked Sekel for providing shirts for Team Autumn the past three years, helping the fundraiser and creating more awareness of what diabetes is and how it can effect the body over time if not managed properly.

Sounds like a fun outing supporting a fantastic cause.

For more information on Tour de Cure events or to learn more about diabetes, visit www.diabetes.org.

Once again, adult soccer games at the Center of Anna Maria Island were postponed.

Thankfully, the postponements were due to heavy rains rather than COVID-19.

Three teams emerged from pool play with 2-1 records and were left to battle it out for the day’s championship during July 22 horseshoe action at the Anna Maria City Hall horseshoe pits.

Neil Hennessey drew the lucky bye into the finals and watched as Tim Sofran eliminated Bob Heiger and Dave Hennessey 21-16 setting up an all walker final. Neil Hennessey took advantage of the bye with a 24-11 victory over Sofran to earn bragging rights for the day.

Heiger and Dave Hennessey came up short during the July 22 games, but they wouldn’t be denied on July 25 as they produced the lone 3-0 record in pool play to win the day’s outright championship.

Golf action at the Key Royale Club in Holmes Beach teed off July 20 with the weekly men’s nine-hole modified-Stableford system match. Gary Alvord and Matt White shared clubhouse bragging rights for the day after they both carded plus-4s on their rounds.

The women got out July 21 for a nine-hole individual-low-net match in two flights. Jana Samuels and Ellen Boin both finished at 2-under-par 30 to share first place in Flight A. Helen Pollock was a shot back in second place with a 1-under-par 31.

Terry Westby fired a 1-over-par 33 to grab first place in Flight B. Penny Williams came in second with a 2-over-par 34, while Fran Barford was another shot back in third.

The men’s nine-hole scramble scheduled for July 23 was rained out.