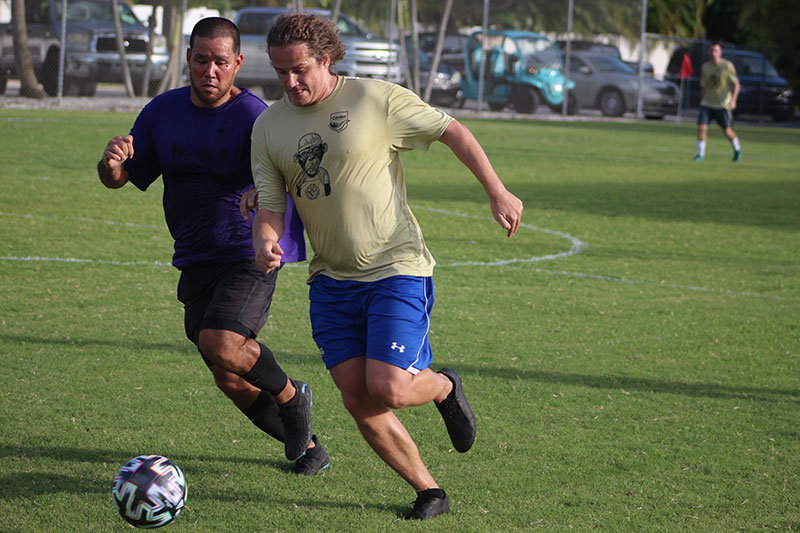 After three weeks of action on the pitch at the Center of Anna Maria Island, Sato Real Estate is atop the standings in the adult soccer league.

Sato Real Estate boasts the lone unbeaten record at 3-0 and is closely followed by Moss Builders at 2-1. Vintage Beach and Blalock Walters follow with matching 1-1-1 records. Beach Bums, Signature Granite and Solid Rock Construction are next in the standings with 1-1 records, while Ross Built at 1-2 and Gulfview Windows and Doors at 0-3 complete the standings.

Action July 30 kicked off with Sato taking on Vintage Beach. The teams battled to a 2-2 tie through 45 minutes. Making it more impressive was the fact that Sato was down a “man” on the field because they lacked a female player to complete their roster.

But Sato kicked it up a notch when Josh Sato corralled a loose ball and carried it forward. He alertly passed to a cutting Nate Welch, who settled the ball before unleashing a solid left-footed shot that found the back of the net.

Welch’s goal proved 30 seconds later to be the game-winner.

His goal was the deciding tally, but Sato and Hakan Toka each added to the winning score with goals. Steve Oelfke helped preserve the victory with 10 saves between the pipes.

Nick Bouchard and Sean Flynn both scored goals to lead Vintage Beach, which also received an assist from Joey Hutchinson and nine saves from Dave Greene in the loss.

The second match of the evening saw Solid Rock Construction edge Moss Builders 7-5 behind two goals and two assists from Chris Scott and a pair of goals from Josh Furman. Gerardo Urbiola and Brayan Felipe each added a goal and Mark Long came through with nine saves to help preserve the victory.

Daniel Anderson notched a hat trick and added an assist to lead Moss Builders, which also received a goal each from Brent Moss and Aaron Parkin. Ryan Moss helped keep the score within reach with 11 saves in the loss.

The last match of the evening saw Signature Granite roll to a 12-1 victory over Gulfview Windows and Doors. Damir Glavan led the way with four goals and an assist while Zach Leib added a hat trick and an assist. Chris Yavalar scored twice and Katie Christenson and Cemal Duzgan each notched a goal. Scott Bear helped out on both ends, scoring a goal while also coming through with four saves in the victory.

The action will continue at 6 p.m. Aug. 5, starting with Moss taking on Vintage Beach. Beach Bums will go up against league-leader Sato in the second match, while Solid Rock and Signature Granite square off in the 8 p.m. match. The final match of the night will pit Ross against Gulfview.

The center is registering players ages 4-17 for its fall youth soccer league. Cost for the league is $10 for members and $126 for nonmembers.

Horseshoe action July 29 at the Anna Maria City Hall horseshoe pits saw two teams emerge from pool play with the prerequisite 3-0 record. The championship match was an early, back-and-forth affair, but Tim Sofran pulled away to earn a decisive, 21-11 victory over Jerry Disbrow and Bob Heiger.

Sofran returned to the winner’s circle at the conclusion of the Aug. 1 games. This time he teamed up with Jerry Disbrow to forge the lone 3-0 record in pool play and earn the day’s outright title.

Play gets underway at 9 a.m. Wednesdays and Saturdays at the Anna Maria pits. Warm-ups begin at 8:45 a.m. followed by random team selection.

Key Royale Club members got in a full week of golf action in Holmes Beach, starting with the men playing their Monday morning modified-Stableford match July 27.

Bill Shuman carded a plus-5 to win the day’s proceedings. Quentin Talbert was alone in second place with plus-3.

The women played a nine-hole individual-low-net match July 28 in two flights. Deb Wohlers rode a birdie on the sixth hole to a 2-under-par 30 to earn a four-shot victory over Helen Pollock and Ellen Boin, who both finished at 2-over-par 34.

The battle for Flight B supremacy ended in a tie between Fran Barford and Terry Westby, who both finished at 4-over-par 36.

The men were back on the course July 30 for a nine-hole shamble. The team of Jon Holcomb, Tom Nelson, Bill Shuman and Ron Vandeman combined on a 2-over-par 66 to earn clubhouse bragging rights for the day. One shot back in second place was the team of Bill MacMillan, Art McMillan, Fred Miller and Quentin Talbert.