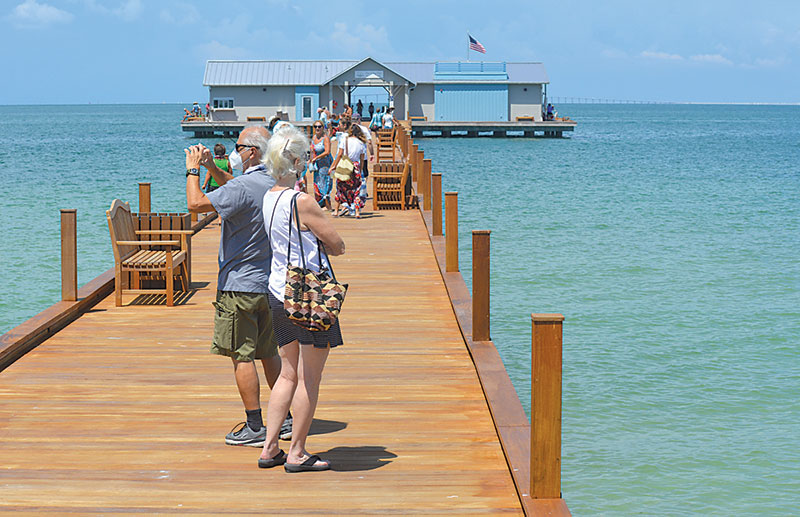 People take in the view Aug. 7 at the new Anna Maria City Pier while the city solicits bids to open a grillroom. Islander Photo: ChrisAnn Allen 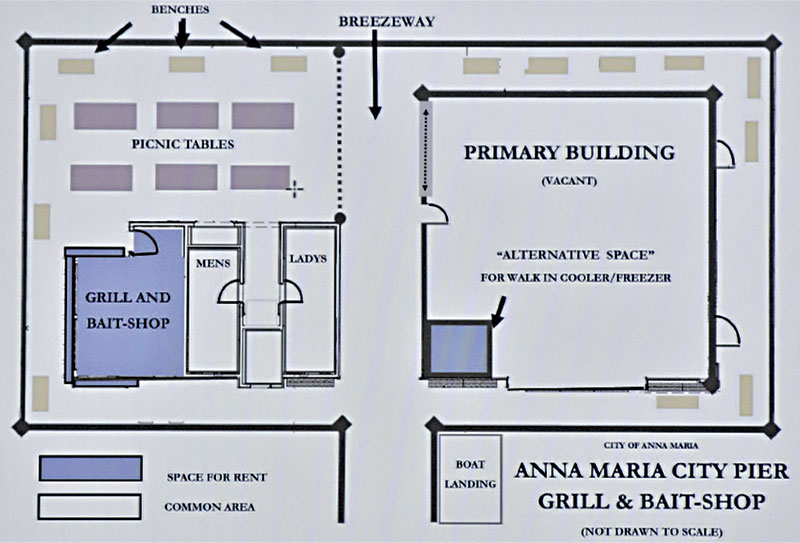 A plan shows the proposed area and layout for a grill and bait shop on the new Anna Maria City Pier, 101 Bay Blvd. The city posted a request for proposals for space. Islander Courtesy Photo 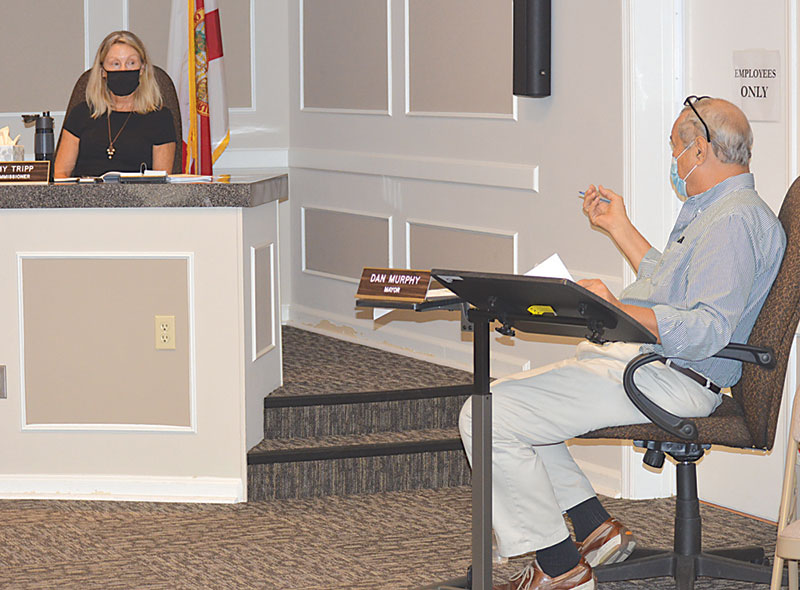 Anna Maria has changed its tack from restaurant to grill for the city pier.

The city is again advertising for proposals after halting negotiations with Holmes Beach’s Ugly Grouper restaurant, one of two bidders for the restaurant and bait shop at the new city pier, 101 Bay Blvd.

The revised RFP is for the bait shop and a small “grill,” a food operation offering takeout food and beverages from building that houses the bait shop on the north side of the T-end.

The larger space on the south side of the T-end — previously operated as a restaurant and labeled as the “primary building” on the new RFP — will remain unoccupied until the city determines how to proceed.

“We are in a hurry to fill the pier,” Mayor Dan Murphy said Aug. 7 during an emergency commission meeting.

He said the time between issuing the RFP and selecting a bidder is tight, but people want bait, food and beverages on the pier.

The city advertised the RFP Aug. 7 on demandstar.com following commission discussion and consensus on the terms.

The commission will hold a pre-bid meeting at 10:30 a.m. Thursday, Aug. 13, and the deadline for written questions from potential bidders is noon Monday, Aug. 17.

The mayor will take several days to review the submissions before calling for an emergency meeting to present the bids to commissioners.

Proposals will be evaluated based on the following criteria:

The grill/bait shop space is about 300 square feet in an area abutting the restrooms on the north side of the breezeway.

There also is room for a small “alternative space” within the primary building for cold storage.

Parking is not a concern as the grill and bait shop lack designated seating with only outdoor benches and picnic tables. The city ordinance on restaurant parking is based on the number of seats.

The mayor said the grill and bait shop should be a “family-friendly operation,” with reasonable prices and a menu of about five items, including breakfast, lunch and dinner.

“I think the city needs to have some say about what is on the menu and how much it will cost,” he said.

“This is not an all-night pier,” Murphy said. “Previously, we had cases of vandalism. This is a brand-new $7 million investment and needs to be attended.”

The commission reached a consensus that beer and wine would be the only alcohol served at the grill.

The RFP also states the city must approve types and hours of entertainment.

The lease is for a 5-year term, with a 5-year extension, at the tenant’s option, and states the city will provide drywall, flooring, a 4-foot hood, grease trap, fire suppression and electrical and plumbing rough-in, excluding fixtures.

The tenant must provide the equipment required to run the grill and bait shop and complete the buildout.

Once a contract is signed, the tenant will have 45 days to complete the buildout and open for business.

The original Anna Maria City Pier had been in operation since 1911 but was closed after damages from Hurricane Irma in September 2017. The city demolished the pier and construction on a new pier began in 2018.

The new pier opened June 19 with limited hours for sightseers and anglers.

You win some, you lose some.

In a statement to The Islander, Ross said he would have liked negotiations to continue, but hopes for the best.

“We appreciated the opportunity to work with the commission and Mayor Murphy for the project to reopen the AMCP bait shop and restaurant,” Ross wrote.

He continued, “We are disappointed we were unable to extend negotiations another week to clear up some miscommunications to try and reach an agreeable deal and open this fall. We are excited to see the historic city pier reopen and will support whoever the new tenant be.”