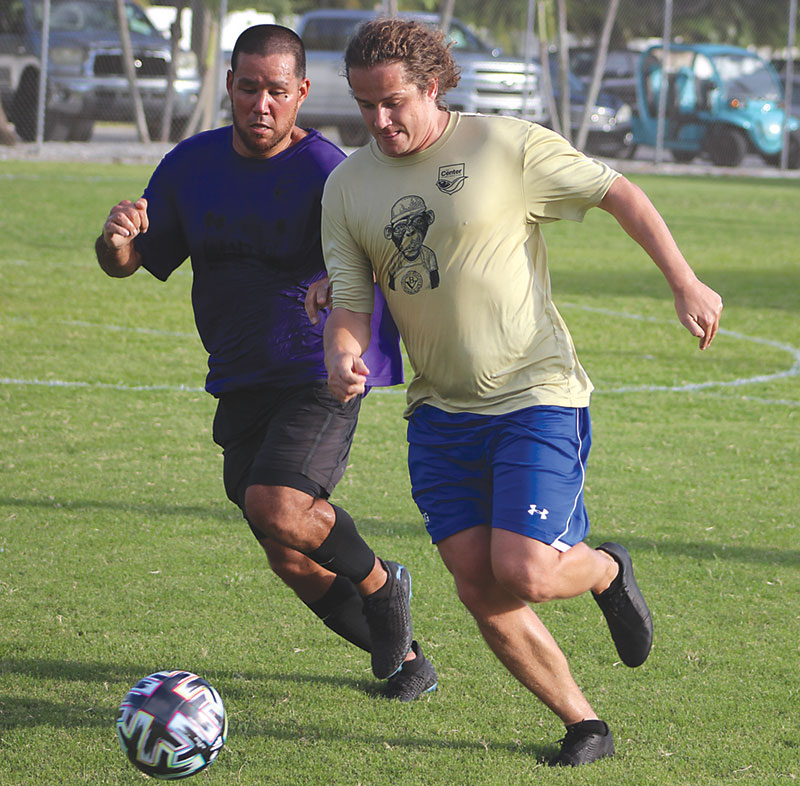 After four weeks of action in the adult soccer league at the Center of Anna Maria Island, Sato Real Estate is on top of the standings with a 4-1 record, just ahead of Solid Rock Construction, which is at 3-1 with one less game played.

Vintage Beach holds third place at 2-1-2, with Blalock Walters right behind at 2-1-1.

Beach Bums and Ross Built follow with 2-2 records, while Moss Builders fell to 2-3 and sixth place in the table.

Signature Granite at 1-3 and Gulfview Windows and Doors at 0-4-1 complete the standings, with three weeks left to play in the regular season.

Action Aug. 5 kicked off with Vintage Beach cruising past Moss Builders by a 5-2 score behind three goals and an assist from Joey Hutchinson and a goal from Clancy Vaughn. An own goal completed the Vintage Beach scoring, while Sean Flynn, Dave Greene and Ben Sato combined for 11 saves in the victory.

Daniel Anderson led Moss Builders in the loss with a goal and an assist and Aaron Parkin added a goal. Ryan Moss and Zach Long combined on 12 saves for Moss Builders.

The second game of the night was tightly contested, with Beach Bums coming out on top 3-2. With the score tied at 2-2 and time winding down, Beach Bums brought goalie Neil Fellowes — who had made six saves — onto the field to spark the offense. Fellowes notched the game-winner with 30 seconds left to play.

Son Robbie Fellowes scored a goal and had an assist and Kevin Roman added a goal for Beach Bums, which also received four saves from Andrew Sullivan in the victory.

Zach Lieb had a goal and an assist in the loss and Damir Glavan notched a goal to lead Signature Granite, which also received eight saves from Scott Bear.

The last game of the night was a blowout as Ross Built destroyed Gulfview Windows and Doors 10-5 behind five goals from Garrett Furman and two goals from Greg Ross. Jake Ross and Andrew Ross both chipped in goals and Chris Circharo made 11 saves to help preserve the victory.

Daniel Adan notched four goals for Gulfview, which also received a goal and an assist from Raul Loera and Keith Mahoney in the loss.

The action continued Aug. 6 with another four matches starting with Solid Rock Construction cruising to a 10-5 victory over Beach Bums behind five goals and two assists from Scott and four goals from James Lynch. Culhane added a goal and Long came through with 10 saves.

The second match of the evening saw Blalock Walters outscore Signature Granite by a 7-3 score. Ryan Hogan and Jessica Williams scored two goals each, while Matthew Staggs, Matthew Plummer and Derek Crooks each scored in the victory.

Sato edged Moss Builders 3-2 in the third match of the night behind two goals from Hakan Toka and a goal from Nate Welch. Steve Oelfke made nine saves to close out the victory.

The final match of the evening saw Vintage Beach and Gulfview Windows and Doors battle to a 5-5 tie. Hutchinson scored four goals to lead Vintage Beach, which also received a goal from Nick Bouchard and 17 combined saves from Ben Sato and David Greene in the tie.

Daniel Adan had three goals and an assist to lead Gulfview, which also received a goal from Keith Mahoney and an own goal to get the tie.

There was no need for playoffs during horseshoe games at the Anna Maria City Hall pits.

Sofran teamed up with Bob Heiger to forge the only 3-0 record during Aug. 8 action to again earn a trip to the winner’s circle.

This is getting to be habit-forming for Sofran, who has finished in the winner’s circle four times in succession.

Play gets underway at 9 a.m. Wednesdays and Saturdays at the Anna Maria pits. Warm-ups begin at 8:45 a.m. followed by random team selection.

Hot, dry weather brought out the golfers at the Key Royale Club in Holmes Beach, starting Aug. 3 with the men playing a nine-hole modified Stableford-system golf match. Bill Demena, Jon Holcomb and Fred Miller all carded plus-1s to finish in a three-way tie for first place. Not sure who was on the hook for the drinks in the clubhouse following play.

The women took to the course Aug. 4 for a nine-hole individual-low-net match in two flights. Helen Pollock rode a chipin on the eighth hole and a low 14 putts to card 2-under-par 30, earning a three-stroke victory in Flight A. Pam Alvord and Sue Wheeler were locked in a tie for second at 1-over-par 33.

Terry Westby’s even-par 32 was good for first place in Flight B. Marilyn Manzer was alone in second with a 5-over-par 37.

The men were back Aug. 6 for a nine-hole scramble. The team of Brett Lance, Fred Miller, Chuck Patrick and Quentin Talbert combined on a 4-under-par 28 to earn clubhouse bragging rights for the day. The team of Mike Clements, Sam Major, Jerry Martinek and Jana Samuels were one stroke back in second place.

The Center of Anna Maria Island is accepting player registrations for its fall soccer league for ages 4-17. The cost for the league is $10 for members and $126 for nonmembers and the last day to register is Aug. 25.