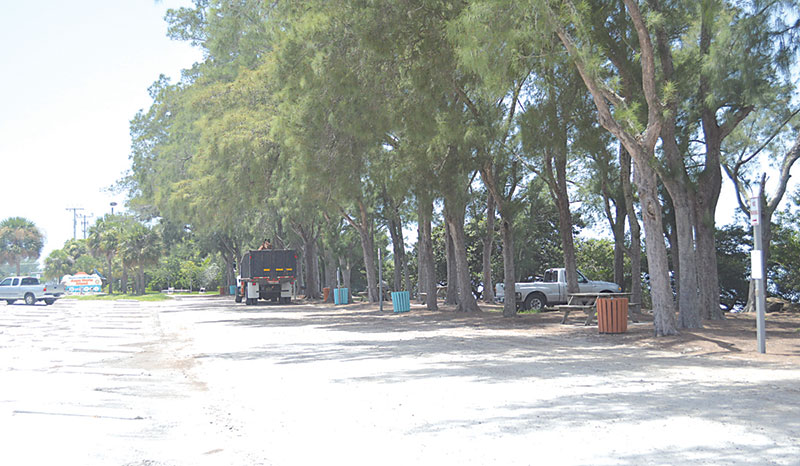 According to a plan proposed by Manatee County and the DOT, the bayfront picnic area at Kingfish Boat Ramp, 752 Manatee Ave. W., Holmes Beach, would be relocated and Australian pine trees removed to add parking. Islander Photo: ChrisAnn Allen

A change in the vista and the ambiance at Kingfish Boat Ramp in Holmes Beach is in store.

It’s also a change for the gateway to the city.

Manatee County, which leases the land at 752 Manatee Ave. W., and the Florida Department of Transportation, which owns it, have created a two-phase concept for park improvements. The boat ramp falls within the city limits in Holmes Beach.

However, the plan, shared in late-June with Holmes Beach Mayor Judy Titsworth, includes replacing shell with impervious concrete, relocation of the bayfront picnic area and removal of mature Australian pine trees along the waterfront.

At a teleconferenced July 21 city commission meeting, Titsworth shared the plans provided by the county with commissioners and said she had met with the county parks engineer to discuss the changes.

“These improvements were much greater than just replacing boat ramps and docks,” Titsworth said.

According to the mayor, improvements listed in the plan include:

Titsworth said Phase II, which adds more boat and trailer parking, would not take place until the new Anna Maria Island Bridge is constructed, which could take 15-20 years.

“I did voice my objections to many of these changes and asked them to reconsider with other options,” she said.

Titsworth said she told the county that park patrons enjoy sitting along the shore in the shade of the trees, which are home to nesting great blue herons.

She also said she is concerned with water displacement due to added impervious surface.

Titsworth said she emailed her concerns to county administrator Cheri Coryea but, as of July 30, had not received a response.