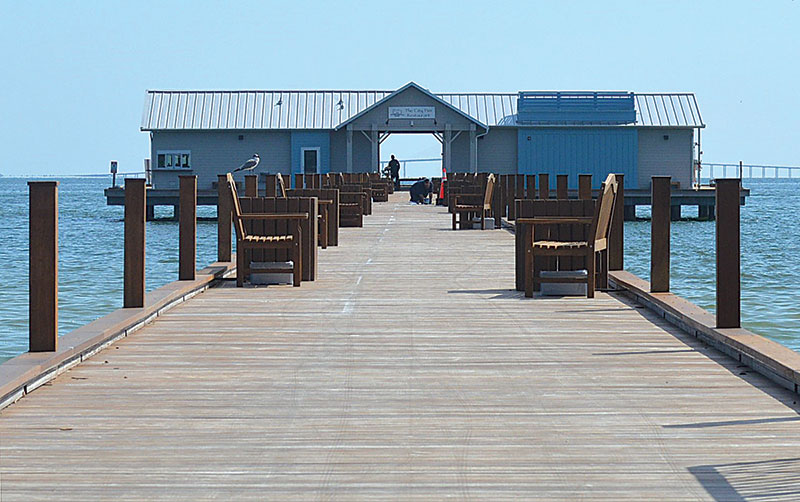 The building at the T-end of the new Anna Maria City Pier sits empty Sept. 24. The city contracted GSM Partners LLC, a trio of Anna Maria businesses, for a grill and bait shop in a portion of the leasable space, to be operational by Nov. 8. Islander Photo: ChrisAnn Allen

Let the celebration begin: The lease is signed.

Anna Maria commissioners unanimously voted Sept. 24 to approve a lease with a trio of Pine Avenue business owners for a grill and bait shop on the T-end of the new city pier.

“I think it’s a good partnership,” Mayor Dan Murphy said Sept. 24. “And I think it is a very fair and equitable contract.”

City commissioners Sept. 4 voted to select the group’s bid, and negotiations between Murphy and Seymour began.

The city accepted GSM’s rent proposal of $6,000 per month for the first year, with a 2.5% increase each following year.

GSM Partners agreed to the city’s proposed 5-year lease with a 5-year option.

According to the contract, the rent includes $500 for cold storage in the primary building on the south side of the T-end.

After several failed lease attempts, the city is still deciding how the primary space will be used.

The contract states the city will provide pier maintenance, for which GSM Partners will pay 10% of cost, to be revisited each year. The tenant also is responsible for 20% of the cost of utilities.

The tenant is responsible for fixtures, equipment, painting and finish work, as well as design and construction of the food service areas with 45 days to complete the build-out and open for business.

That puts completion at Nov. 8.

If the tenant completes the build-out in less than 45 days, rent payment for the month might be waived.

Seymour, who attended the meeting on behalf of the partnership, said GSM Partners hired a planner, who has started work on the design.

“We’re trying to move the process forward to get to permitting as soon as possible,” Seymour said.

Murphy said Sept. 24 that Seymour agreed to manage the build-out — including the city’s share of construction, previously estimated at about $41,350. The mayor said Seymour would provide estimates for each portion of the project, to be approved by the commission.

“I think by having Mr. Seymour in charge of organizing and spearheading that, it will really make things go a lot quicker,” Murphy said.

Seymour added that he determined the grease trap, estimated as a $25,000 expense for the city, would not be required.

A motion for the mayor to sign the contract with GSM passed unanimously.

“We look forward to not just these next 10 years, but potentially, hopefully, more in the future,” Seymour said. “And maybe looking into the primary space as well.”

People are anticipating the grill and bait shop at the new Anna Maria City Pier.

GSM Partners will open in early November. Hours of operation will be 7 a.m.-10 p.m. daily — and the pier will open the same.

The list of bait and tackle is extensive, with seasonal and frozen bait and a live bait well.

In the meantime, the pier remains open for visitors and fishing 8 a.m.-5 p.m. Friday-Sunday.