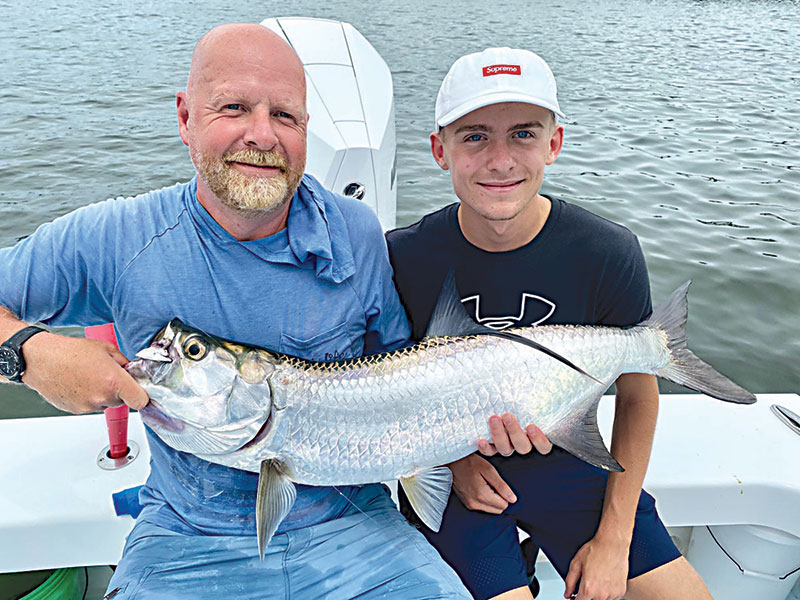 Kevin Kerridge and son Beck, vacationing in Anna Maria for the summer from New York, went fishing Aug. 22 for snook and redfish with Capt. Dave White of Anna Maria Charters. They wound up finding an inshore school of tarpon. The pair hooked up three junior silverkings and landed and released two. 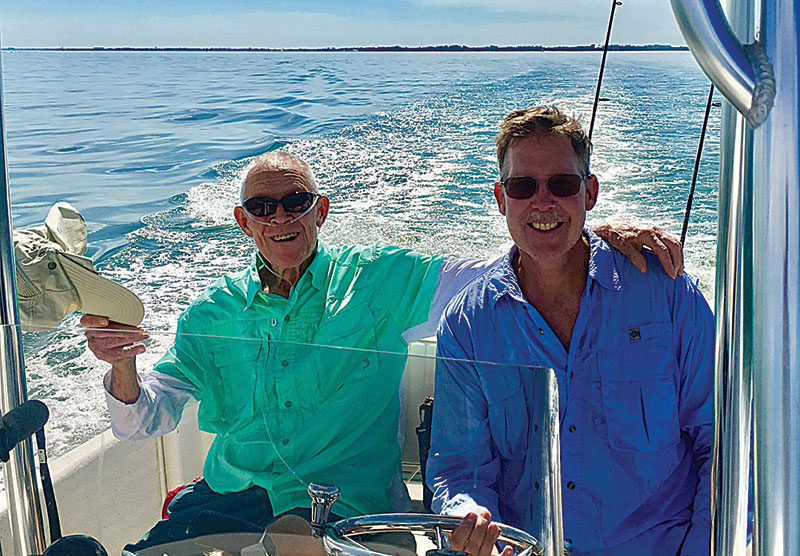 Sharing a life-long passion Fred Barton, 92, left, a 30-year resident of Holmes Beach with wife Debbie, is a lifelong fisherman and U.S. Marine. Son Eric took dad fishing Aug. 12, when Fred declared it would be his last as he prepared to undergo home care. According to a friend, Robert Lopez, Fred’s children, Robert, Janice, Susan and Eric, along with Debbie, his wife of 70-plus years wanted to acknowledge his passion for fishing.

And BOLO for fast-moving weather.

Early morning fishing on the flats before the sun gets high is worthwhile for the catch-and-release snook and redfish.

I think picking the days to fish is the key to success. Choose days when there are swift moving tides and low light in the early morning, when water temps are slightly cooler, helping trigger the inshore species to feed.

Combining good tidal flow with a lower morning temp can result in great summertime action on the flats. As the day progresses and the sun rises, you’ll notice the shallow areas where snook and redfish forage are not as productive as during the cool of the morning.

The reason? It’s too darn hot.

If you’re willing to brave the heat, then I suggest moving to deeper water to target mangrove snapper and grouper, as well as popular migratory fish, such as mackerel and jacks.

Down deeper, where the water temps remain cooler, the bottom dwellers — snapper and grouper — remain motivated to eat. If you can venture offshore to depths of 80-100 feet, you’ll find a more accommodating bite.

Also, keep in mind that with the hottest days of the year there’s potential for pop-up storms. Keep an eye on the sky to prevent being trapped by heavy rain with lightning. Calm conditions can switch to rough waters in a second when you’re offshore. And the storms that bring lightning can be startling when you’re on a boat. Always consider your safety and the safety of your passengers ahead of your fishing goals and do the best you can do to avoid the fast-moving weather.

Capt. Warren Girle is encouraged to see the habitat of Sarasota Bay showing improvement after the devastating red tide of 2018-19.

He says bay fishing over deep grass areas is yielding a variety of species.

And most importantly, mangrove snapper are coming on strong. Limits of the snappers are being caught in a morning of fishing by bumping from one spot to the next. It’s not a “one-stop shop,” but Girle’s anglers are putting enough in the cooler for dinner. Fishing shallow over the flats in Sarasota Bay also is yielding some good action, especially on catch-and-release redfish.

Capt. David White is concentrating inshore, where catch-and-release snook and redfish are being hooked up along mangrove shorelines at oyster bars. Casting live shiners — either free-lined or under a cork — is producing action.

Moving to the deeper grass, White is putting clients on plenty of mangrove snapper and Spanish mackerel in Tampa Bay over structure.

To mix things up, White found some juvenile tarpon that, when hooked on light tackle, are thrilling for his clients.

With bad weather and rough seas, Capt. Jason Stock limited his charters to inshore action, where the gag grouper and mangrove snapper bite in Tampa Bay kept him busy. Free-lining large baits — such as pinfish — around wrecks and rock piles in the bay was producing some keeper gags. As for the snappers, small white bait works well.

Also, while in the bay, Stock has his eyes peeled for juvenile tarpon. These small schools tend to bite more as the heat of pursuit of the silver king wanes.

Jim Malfese at the Rod & Reel Pier says mangrove snapper are the targeted species. Anglers using live shrimp as bait are catching limits of the tasty inshore snappers. In the midst of the snapper, anglers also are hooking into some catch-and-release snook and redfish.

Fishers casting jigs from the pier are hooking into jack crevalle and ladyfish for sport, but the bite is sporadic.