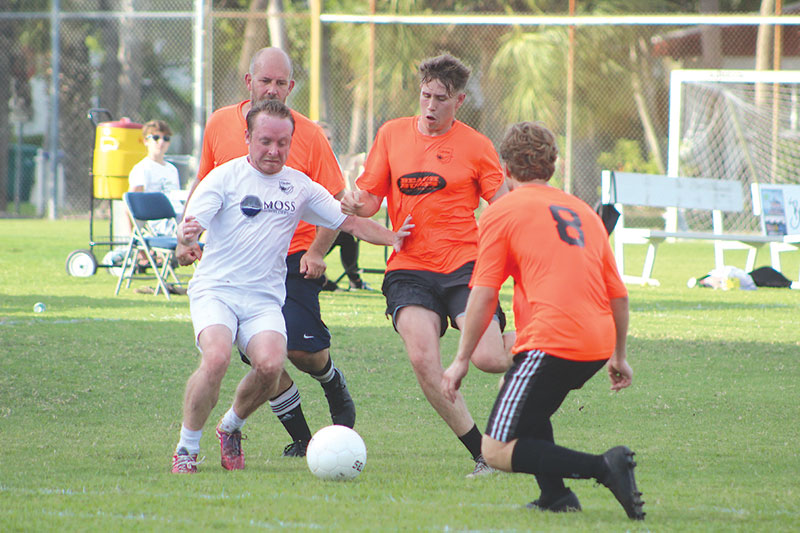 The seeds are set for the adult soccer league playoffs at the Center of Anna Maria Island.

Beach Bums grabbed No. 1 on a 5-3 record, ahead of 5-3 Sato Real Estate thanks to a better goal differential. Ross Built took third with a 4-3-1 record, while Solid Rock Construction finished in fourth place with a 4-4 record. Vintage Beach at 3-3-2 held down the No. 5, just ahead of Moss Builders at 3-4-1. Signature Granite finished seventh on a 3-4-1 record, while Blalock Walters grabbed the last playoff spot at 2-3-3. Gulfview Windows and Doors finished the season with a 2-4-2 records and were eliminated.

Action Aug. 27 at the center, 407 Magnolia Ave., kicked off with Beach Bums taking on Moss Builders. The game was a contrast of styles, with Beach Bums playing a possession game, spreading its players out and keeping the ball on the ground. Moss Builders played long balls, sending them down the field to either Ryan Moss or Aaron Parkin.

Moss took an early lead when goalie Zach Long spotted Parkin behind the Beach Bums defense and hit him in stride with a perfectly placed goal kick. Parkin settled the ball, cut inside and beat Moss goalie Jason Sato for a 1-0 lead.

Beach Bums offense came on to score three times in the next five minutes. Neil Fellowes started the explosion when he threaded a nice pass up the middle to Kevin Roman, who carried the ball in on goalie Long, who came out and made the initial stop. The ball caromed back to Roman, who put it into the unoccupied goal to tie the score at 1-1.

Robbie Fellowes gave Beach Bums the lead in the 13th minute when he carried the ball up the left side and scored on a nice left-footed shot. Andrew Sullivan completed the scoring barrage with a quick throw-in from Roman and scored to give Beach Bums a 3-1 lead.

Moss Builders pulled to within a goal in the 19th minute when Parkin carried the ball up the middle before passing to Moss who beat Sato with a nice shot to the far post.

Beach Bums restored their two-goal advantage a minute later when Roman hit an absolute laser from 20 yards out for a 4-2 lead.

A goal kick from Long had Moss one-on-one with Sato, but Moss got pulled down from behind giving Moss a penalty kick, which Ryan Moss converted to end the half with Beach Bums up 4-3.

The second half started slow until 10 minutes in and Tim Holly settled a goal kick at the 18-yard line, turned and blistered a left-footed shot past Sato to tie the score at 4-4.

Six minutes later, Beach Bums took the lead for good. A scramble for the ball ensued in front of the Moss Builders goal where Roman pounced and poked it past Long for a 5-4 lead.

Roman added a pair of goals down the stretch giving Beach Bums a 7-4 victory and the top spot in the standings.

Roman finished with five goals and an assist, while Robbie Fellowes and Sullivan each added one goal. Amy Ivin and Neil Fellowes finished with two assists each and Sato made four saves to help preserve the victory.

Ryan Moss led the builders with two goals while Parkin finished with a goal and an assist. Holly added a goal and Long made nine saves and had a pair of assists in the loss.

The second match of the night saw Sato hold onto the second seed behind two goals each from Alisha Keene and Murap Akay and a 5-4 victory over Solid Rock Construction. Connor Bystrom chipped in a goal, while Steve Oelfke made five saves in the win.

The third match of the night was something of a playoff game as Gulfview Windows and Doors needed a victory over Blalock Walters to get into the playoffs. Blalock Walters held on for a 5-5 tie to grab the eighth and final playoff berth behind two goals from Matthew Plummer and a goal each from Austin Nutting, Matthew Staggs and Jessica Williams.

Gulfview Windows and doors received two goals each from Keith Mahoney and Daniel Adan. Raul Loera added a goal and an assist and Nate Talucci notched five saves in goal.

Playoff action kicks off at 6 p.m. Thursday, Sept. 3, with Solid Rock Construction taking on Vintage Beach, followed by Ross Built versus Moss Builders at 7 p.m. At 8 p.m., No. 1 seed Beach Bums faces off against Blalock Walters, followed at 9 p.m. by top-seed Sato and Signature Granite.

No information was available from the center regarding the free soccer clinics.

Volunteers looking to coach a team or for more information on the league, contact Connor Haughey at 941-778-1908, ext. 209, or connor@centerami.org.

Aug. 26 horseshoe action at the Anna Maria City Hall horseshoe pits saw Tim Sofran rally for a 21-20 victory in his final pool-play match to finish with the only 3-0 record and bragging rights for the day.

The Aug. 29 games again saw Sofran in the mix, this time teamed up with Jerry Disbrow. Sofran and Disbrow won their final pool-play match by a 21-20 score to secure the lone 3-0 record and a trip to the winner’s circle. The victory was Sofran’s fifth in succession.

There  is no charge to play and everyone is welcome.