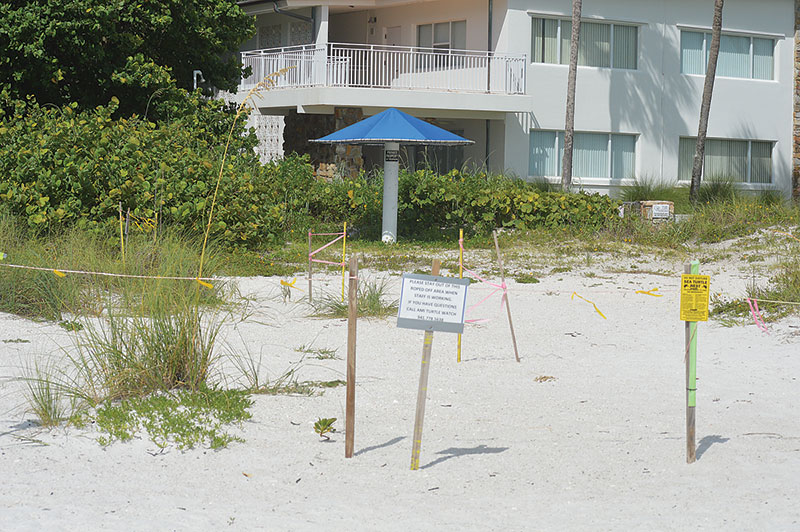 A sea turtle “nursery” near White Avenue at the boundary between Holmes Beach and Anna Maria — once filled with tapes and stakes that marked hundreds of nests — has a few remaining marked nests as of Aug. 26. Islander Photo: Chris-Ann Allen

And a previous lighting problem, disorienting hatchlings away from the Gulf of Mexico, was fixed.

As of Aug. 28, 249 nests had hatched in a “nursery” area on the beach near White Avenue and Peppertree Lane, near the Anna Maria/Holmes Beach boundary.

The spot was chosen based on the depth of the beach and fewer lighting concerns, according to Anna Maria Island Turtle Watch and Shorebird Monitoring executive director Suzi Fox.

Artificial light visible from the water’s edge can draw sea turtles away from the Gulf of Mexico, increasing the chances of death by predation, dehydration or exhaustion before reaching the water.

All nests in Bradenton Beach and Holmes Beach laid since season started at the end of April have been relocated to the nursery due to the intrusion to the sea turtle habitat from the $17 million beach renourishment project, which commenced near 77th Street in Holmes Beach July 8 and will continue south to Longboat Pass through the end of October.

In August, Fox was concerned a light at the top of a privately owned pole in Holmes Beach, caused up to 6,000 hatchlings to disorient.

The property owner was not local and the city had to make contact before action could be taken.

Holmes Beach Police Chief Bill Tokajer said Aug. 26 Florida Power and Light turned off the light, with permission from the city and the owner.

“Some of those lights were not even in our city, but we still addressed it with FPL,” Tokajer said.

Fox said there are about 100 nests left to hatch in the nursery.

“We don’t foresee any more problems in the hatchery area now that one light has been turned off,” she said. “Hats off to Holmes Beach for getting it taken care of.”