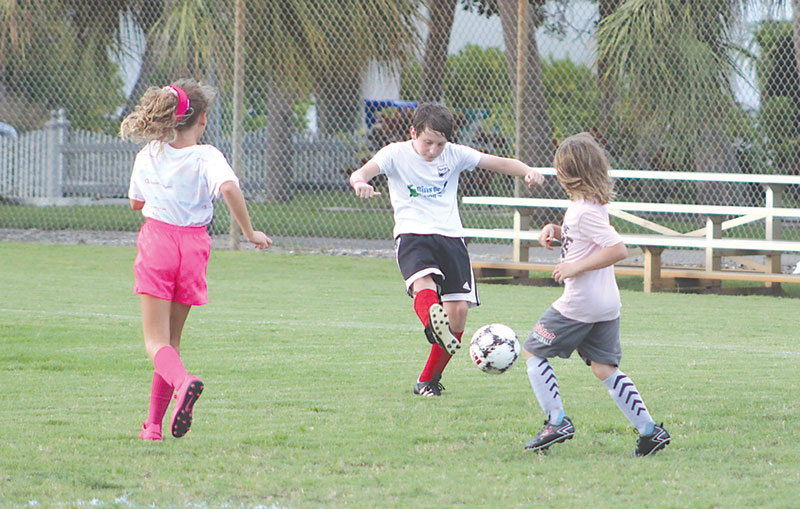 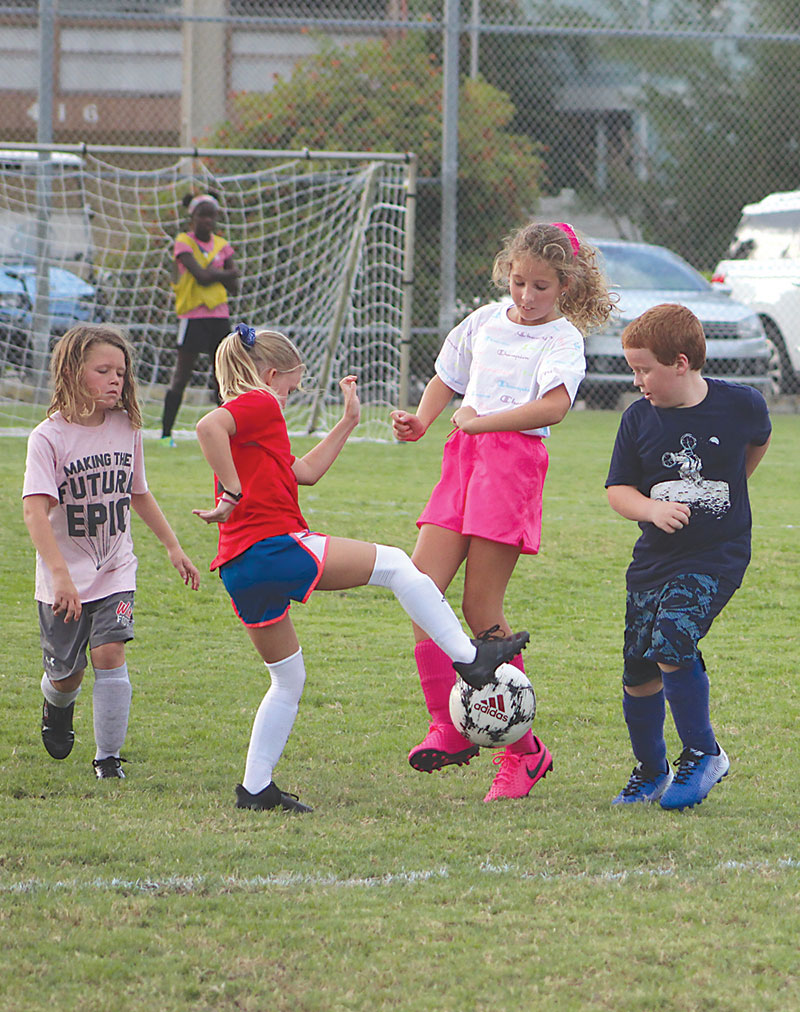 Beach Bums’ Jazzy Sparks and HSH Designs Ila Tyler battle for the ball as Jackson Rosas and Bosan Duytschaver wait for a chance at the ball during Sept. 8 youth soccer action.

The Fall youth soccer season at the Center of Anna Maria Island kicked off Sept. 8.

The pitch saw action from 8-10 division teams HSH Designs and Beach Bums. The Bums prevailed by a 2-0 margin behind a goal each from Tomas Bartos and Oliver Tirpak. Goalie Cyrus Ryan helped preserve the victory with five saves.

Savannah Coba and Brady Thompson were strong for HSH Designs, which received three saves from Estella Long in the loss.

The second 8-10 division match saw Moss Builders cruise to a 4-0 victory over Miz & Hiz Biz behind a hat trick from Dylan Sato and a goal from Mason Moss. Silas Dewitt added an assist and Xane Flores contributed four saves.

The 11-14 division kicked off next with Tidy MD edging Slim’s Place 3-2 behind two goals from Victor Albrecht and a goal from Jayden Sparks. Frankie Coleman added a pair of assists and Emma Raulerson made three saves in the victory.

Elek Brisson scored a pair of goals to lead Slim’s Place, which also received a combined five saves from goalies Asa Brisson and Mya Ferrari in the loss.

Youth soccer action continues Sept. 15 with four matches, and kicking off at 6 p.m.

A power outage and heavy rains put a damper on the adult championship game at the Center of Anna Maria Island.

The outage on championship night, Sept. 10, finally put hopes for the championship match between No. 2 seed Sato Real Estate and top seed Beach Bums out of reach.

Sato Real Estate advanced to the championship with a 5-2 victory over Moss Builders behind a hat trick from Connor Bystrom and a goal each from Josh Sato and Hakan Toka. Murap Akay added an assist and Steve Oelfke made seven saves in the victory.

Daniel Anderson and Ryan Moss each scored a goal to lead Moss Builders, which also received an assist from Brent Moss and 10 saves from Zach Long.

Beach Bums cruised into the finals with a 10-5 victory over Vintage Beach behind a hat trick from Amy Ivin and two goals each from Connor Haughey, Yuri Pereira and Kevin Roman. Robert Fellowes, Neil Fellowes and Haughey added assists to the victory, while Andrew Sullivan and Haughey combined on 10 saves.

The match was not on the center’s online calendar as of press time Sept. 14.

Forty-eight golfers celebrated Labor Day by teeing it up for a step-aside-scramble at the Key Royale Club in Holmes Beach.

The longest-drive competition for the women went to Karen Mitchell, while Steve Vasbinder grabbed the men’s title. Debi Wohlers took closest-to-the-pin for the ladies and Steve Donnella delivered for the men.

After the golf, 60 or so members and guests celebrated the day with awards, lunch and libations.

The women were on the course Sept. 8 for a nine-hole individual-low-net match that saw Ann Hackinson fire a 5-under-par 27 to grab first place by one stroke over Terry Westby.

The men played a nine-hole scramble Sept. 10 with a twist — only three clubs could be used. The team of Mike Clements, Bill MacMillan and Jerry Martinek finished in a tie for first place with the team of Mike Cusato, Fred Miller and Ken Nagengast on matching 3-under-par 29s.

Three teams emerged from pool play with 2-1 records and settled things in the playoffs at the Sept. 9 games at the Anna Maria City hall horseshoe pits.

Tim Sofran and Bob Heiger drew the lucky bye into the final and watched as Jerry Disbrow and Neil Hennessey defeated Gary Howcroft 21-13 to advance to the finals. Sofran and Heiger cruised to the winner’s circle with a 21-9 victory over Disbrow and Hennessey.

Sofran and Heiger teamed up again for the Sept. 12 games and forged the lone 3-0 record during pool play to earn the day’s outright championship.