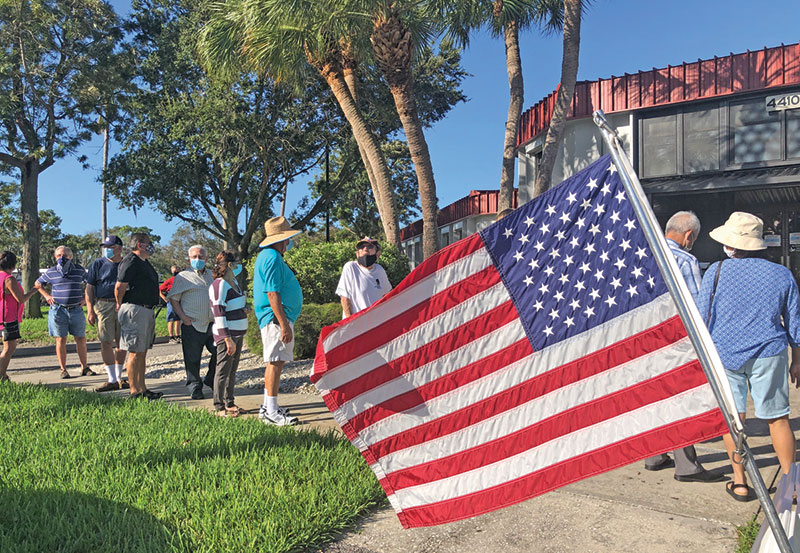 In line for early voting Manatee County voters line up Oct. 19, the first day of early voting, to cast ballots in the Nov. 3 election. A line stretched from the entrance to the polling place at the Manatee County Utilities office, 4410 66th St. W., Bradenton, into a back parking lot — about two blocks. The polling place is the nearest to Anna Maria Island and open 8:30 a.m.-6:30 p.m. daily through Sunday, Nov. 1. Islander Photo: Lisa Neff

The signs are up and the mailers are out.

And voting is ongoing.

Meanwhile, Holmes Beach City Commission candidates have filed their reports on campaign contributions and expenditures for the Nov. 3 municipal election.

Mayor Judy Titsworth is unopposed in her bid for a second term. She contributed $1,000 to her campaign fund and her expenditures included a $240 qualifying fee.

According to his finance report, Morton contributed $800, received $1,400 and spent $1,474.46 on his campaign. The money paid for the qualifying fee, signs flyers and mailers.

He received contributions from Gerald Newbrough and Hugh Holmes Sr. of Holmes Beach, as well as $300 from Shoreline Builders of Southwest Florida, a construction firm owned by Mayor Judy Titsworth and husband Steve.

Other contributing business entities included the Beach Bistro restaurant and Mike Norman Realty, both in Holmes Beach, and Palma Sola Animal Clinic and RE/MAX Alliance Group, both in Bradenton.

Rash reported expenditures for his qualifying fee, postcards, postage, signs and printed advertisements as of Oct. 13.

Of 2,784 registered voters in Holmes Beach, 856 people voted in the November 2019 municipal election.