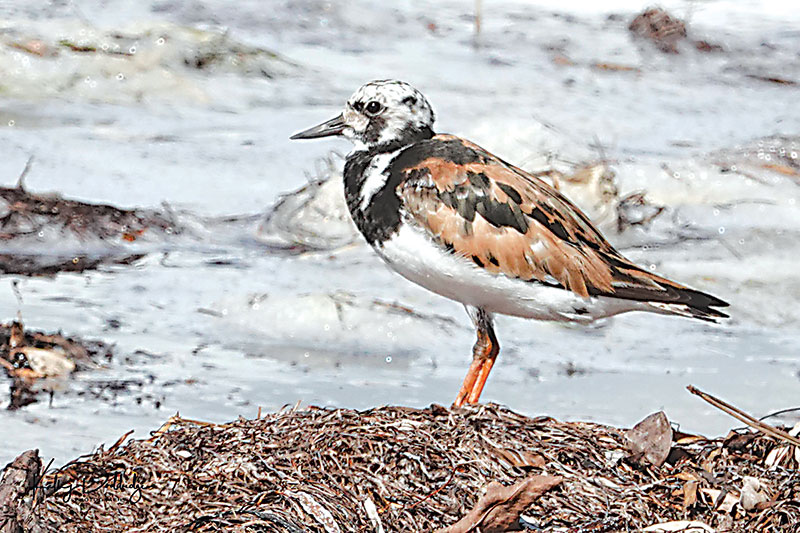 A ruddy turnstone stands at the shoreline’s edge in Anna Maria in August. The species usually migrates to the Bahamas for the winter, but might stay longer this year due to shoreline damage from Hurricane Dorian in 2019, according to Suzi Fox, Anna Maria Island Turtle Watch and Shorebird Monitoring executive director. Islander Photo: Kathy Doddridge 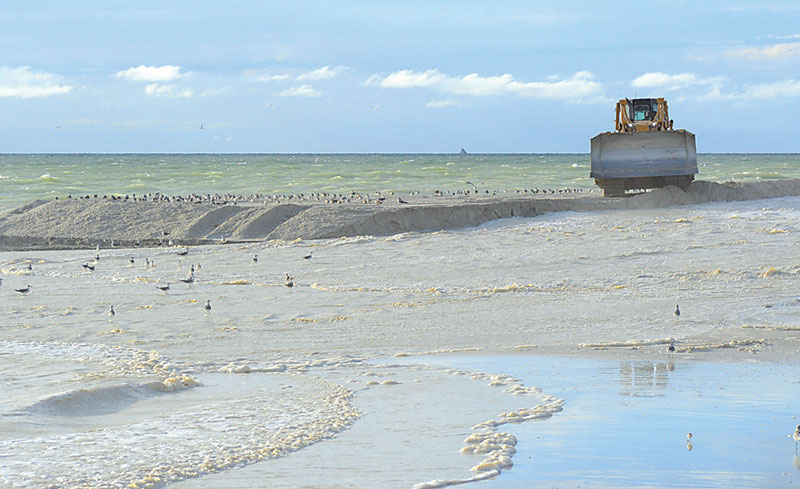 Shorebirds of various species flock Sept. 29 to a makeshift peninsula of sand in the wake of a beach renourishment project on the shore in the 1100 block of Gulf Drive in Bradenton Beach. Islander Photo: ChrisAnn Allen

Twelve of 349 sea turtle nests remain as of Sept. 30 in an Anna Maria Island Turtle Watch “nursery” on the beach near White Avenue and Peppertree Lane — near the Anna Maria/Holmes Beach boundary — according to AMITW executive director Suzi Fox.

As of Sept. 30, 19,256 hatchlings had emerged from the relocated nests and crawled to the Gulf of Mexico.

Hundreds of loggerhead nests and one green sea turtle nest laid in Bradenton Beach and Holmes Beach since the season started in late April were relocated to Anna Maria due to the ongoing $17 million beach renourishment project, which includes pumping sand from offshore to renourish eroded beaches.

Following Florida Fish and Wildlife Conservation Commission protocol, the nests were moved so they would not be destroyed by the project and the hatch rate has been good, Fox said Sept. 30.

Now, shorebirds are enjoying the bounty of fresh food provided by the new sand, pumped in from offshore borrow areas.

“Shorebirds, including royal terns, sandwich terns, all wading bird species, our local laughing gulls and the black skimmers that will stay and winter with us, are really enjoying treats from the new sand,” Fox said Sept. 30. “We also have been watching a banded group of American oystercatchers along the shoreline.”

She added that colorful ruddy turnstones, which usually would be heading to the Bahamas for winter, have flocked to the island in larger numbers this year and might stay longer.

“We suspect the ruddys were not able to return to their local Bahama shoreline this year because of Hurricane Dorian’s hit last summer,” she said. “They seem to have relocated here and are loving the nourishment project.”

Fox also said the fencing around the renourishment project allows the birds to move more freely, without human interference. And the equipment poses no threat.

“People were worried that the loud machinery might frighten the birds,” she said. “But it is quite the opposite.”

For more information on the nesting season, contact AMITW executive director Suzi Fox at suzifox@gmail.com or 941-778-5638.