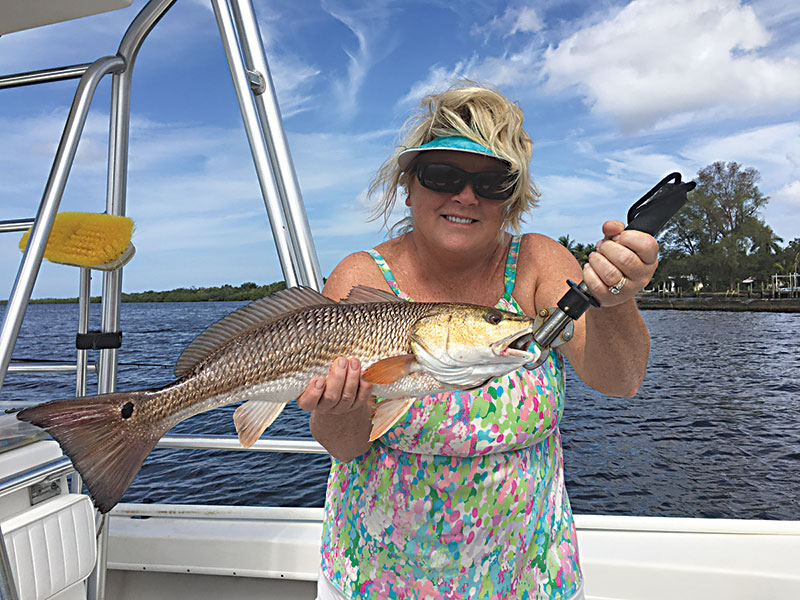 Carla Beardslee shows off a 26-inch redfish she caught Oct 7 near shore. She quickly released the fish while on a chartered fishing trip with Capt. Danny Stasny of Southernaire Fishing Charters.

A taste of autumn is in the air.

Or should I say in the water?

A highlight is the abundance of migratory species — Spanish mackerel, kingfish, bonita and sharks.

Vast amounts of bait fish are gathering along the beaches, attracting predators that hunt the nearly unlimited food supply. The bait predators — kingfish, macks and bonita — are patrolling the beaches for these large bait schools.

Blacktip and spinner sharks are the most prominent, followed by hammerheads, bulls and sandbar sharks. All of these are worthy adversaries for anglers hoping to hook into something big. Most of the action occurs within a mile of the beach, although reaching out to the artificial reefs to cast a big bait is a good bet.

Moving inshore to mangrove shorelines and around residential docks, anglers are targeting catch-and-release snook and redfish. Early morning — right around sunrise — is most productive as long as you have swift moving tides and clean water.

As the day presses on, moving to deeper grass flats proves to be productive for catch-and-release spotted seatrout. Mixed in with the trout bite are bluefish, jack crevalle and ladyfish, adding a nice variety to the bite.

On my Southernaire charters, I’m patrolling the beaches for migratory species. Not only is this action good, but it gives me a break from fishing the flats every day. Anchoring on the beach and chumming with live shiners is working to attract Spanish mackerel, bonita and kings. Once the fish are in the chum, I’m instructing clients to cast live free-lined shiners on a 2/0 long-shank Eagle Claw hook.

This method works most of the time. On some occasions, the kings are biting fiercely and getting above the long shank hook, resulting in my clients getting cut off.

In these situations, I’m adding a small section of hardwire to the hook. This 4-5 inch run of wire is enough to prevent the kings from biting the line — but it only works if the water is not too clear, as the kings may see the wire, which can cause them not to bite.

Once we’ve boated our share of macks and bonito, it’s time to try for a shark or two. Either fresh-cut pieces of bonita or legal-size Spanish mackerel are attracting sharks to the hook. Most are black tips or spinner sharks, although I see some hammerheads, too.

On days when I’m fishing the flats with clients, we see many catch-and-release snook, as well as some catch-and-release redfish. The best bite in the backwater is from the catch-and-release spotted seatrout. On some flats, we’re hooking 20-30 trout without even pulling anchor. That’s good action right there. Mixed in are numerous ladyfish, bluefish and jack crevalle.

At the Rod & Reel Pier, Hamilton Brown says catch-and-release snook and redfish are being caught with some frequency.

For the snook, large baits — pinfish and ladyfish — are working well. Fresh-cut baits work for the larger snook, as long as you are patient and willing to sit and wait.

As for the reds, cut-bait is producing a bite, although live shrimp is working best. With live shrimp for bait, anglers are hooking into mangrove snapper and black drum.

For those who like to keep busy, Spanish mackerel fishing is quite good and getting better. Casting lures — small white jigs or silver spoons — is advantageous. Try using Clark spoons to attract the macks. These spoons have a single hook, which makes releasing a fish relatively easy. You don’t have to worry about messing with sets of treble hooks on some of the other lures. Mixed in with the macks at the Rod & Reel are many ladyfish and jack crevalle.

Capt. Warren Girle is working along the beaches of Anna Maria Island for an assortment of migratory species. Free-lining live shiners on a long shank hook is leading Girle and his clients to plenty of macks and bonita. Mixed in are some jack crevalle and kingfish.

With all this action, the sharks are not far behind. Blacktip sharks — the most frequently observed species — are being caught on fresh-cut chunks of macks.

Moving to the backcountry, Girle is putting sportfishers on catch-and-release snook and redfish on the shallow flats adjacent to mangroves and oyster bars. This bite is occurring in 2-3 feet of water. On the deeper flats, in 5-7 feet of water, catch-and-release spotted seatrout are abundant and ladyfish and bluefish are rounding out the party.

Capt. Jason Stock is in pursuit of kingfish along the beaches of Anna Maria Island. Stock is finding action in the 3- to 5-mile range on a variety of fish, including the sought-after kings.

Macks, bonita and sharks are cruising these waters, too, where freelining live shiners works well for the trio of macks, kings and bonita.

As for the sharks, a fresh-cut steak from a mack or bonita is preferred by the predators. These oily fish put out so much scent, the sharks can’t resist taking a taste.