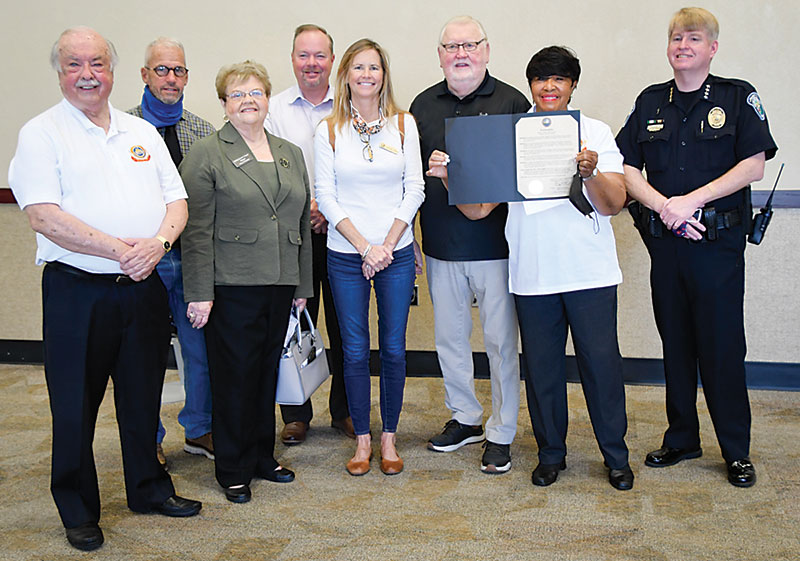 Manatee County staff and elected officials stand together Nov. 10 after commissioners approved a proclamation to distribute $25,000 to each city in the county to support the Mayors’ Feed the Hungry Program. The contributions would total $150,000. Islander Photo: Ryan Paice

There will be thanksgiving, but the details are still being decided.

Manatee County commissioners unanimously adopted a proclamation Nov. 10 designating $150,000 in Coronavirus Aid, Relief and Economic Security Act funds — with $25,000 tagged for each city to support an anti-hunger effort — for the Mayors’ Feed the Hungry Program.

Congress passed the $2 trillion CARES Act in March, which distributed emergency funds to every state to divvy up between local governments, small businesses, community organizations and citizens.

Manatee County received $70,000,000 through the federal act and created several assistance programs to distribute the funds.

The volunteer-based Mayors’ Feed the Hungry Program has given away more than 600 tons of food and $3.5 million in food gift cards since it launched in 1987 to help feed hungry citizens.

“The COVID-19 pandemic has directly impacted many area residents resulting in lost income and food uncertainty,” states a proclamation associated with the CARES Act appropriation. “The Mayors’ Feed the Hungry Program will be a vital lifeline for many families during the upcoming holiday season.”

The county Facebook page Nov. 10 included a photo of Mayors’ Feed the Hungry representatives and local officials and a post that read, “County commissioners have designated $150,000 in CARES Act funds to the Mayors’ Feed the Hungry Program. Each city in Manatee County will receive $25,000 to purchase food to feed thousands of Manatee County residents.”

However, it is unclear how the money is meant to be spent or allocated.

Scott Biehler, executive director of the Mayors’ Feed the Hungry Program, wrote a Nov. 13 email to Anna Maria Mayor Dan Murphy with the subject line, “$25,000 Check to Feed the Hungry.”

“We will use the $25,000 check to purchase $10 food gift cards from Publix and make them available through our food pantries to people in need,” Biehler’s email to Murphy stated.

Biehler also provided a mailing address for the check but offered to have a representative from the program collect the funds.

He wrote that county administrator Cheri Coryea had sent the city a letter Nov. 5 stating that the money was “to assist persons in their city for the program” and that the Mayors’ Feed the Hungry Program “will assist with the program distribution.”

“We have several food banks on the island that can help us distribute food and/or gift cards,” Murphy wrote. “We look forward to working with you in the distribution of these funds.”

Holmes Beach Mayor Judy Titsworth also expressed some confusion regarding how the money would be distributed.

“It’s been extremely confusing,” Titsworth told The Islander Nov. 13. “When I got that email today, I was like, ‘What?!’ I thought they were going to coordinate with us on the application process.”

“I’m not under the impression that we just write a check for $25,000 and give it to them,” Titsworth added. “They have to work with us to show us how it’s going to the people in our community.”

Titsworth said she was working with county staff and the Mayors’ Feed the Hungry Program to resolve the confusion.

“It’s one of those things that happened so quick that I don’t think the county has touched base with everybody on how this is going to work yet,” she said. “Hopefully, by early next week, we’ll know more.”