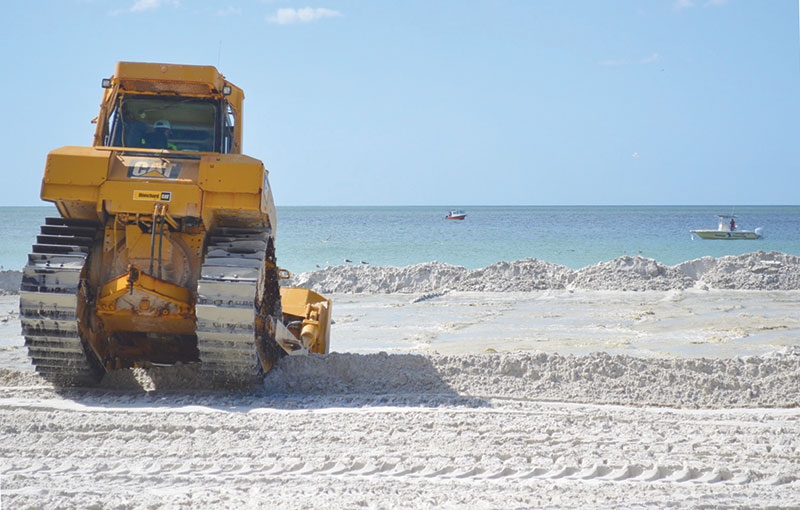 People have been wondering: Did Tropical Storm Eta suck all the sand off recently renourished beaches?

The storm’s passage through the Gulf of Mexico Nov. 11, about 100 miles from Anna Maria Island, coincided with high tide, creating about a 3-foot tidal surge.

Social media lighted up Nov. 12 with questions about how Eta might have affected the sand replenishment — a $17 million project which started July 8 near 77th Street in Holmes Beach and will soon terminate at Longboat Pass.

The project, which involves pumping sand from borrow areas via a dredge about a quarter-mile offshore to replenish eroded beaches, paused for storms Laura, Sally, Delta, Zeta and Eta.

Hunsicker said the project is named the “Anna Maria Island Shore Protection Project” by the U.S. Army Corps of Engineers, a funding source for the project because the purpose of the beach is to buffer the shoreline.

“With energy coming ashore with storms of this magnitude, as the sandy beach washes away, it’s done its job,” Hunsicker said. “Without the beach, we’d be looking at Gulf-facing roads, utilities, water, sewer, electric, and, ultimately, homes that would absorb the brunt of a storm and be washed away.”

He said, with Tropical Storm Eta, rough waves pulled sand from the shoreline to a sandbar about 50-60 yards offshore. However, over the summer, he expects gentle waves to move the sand back to shore. He added that island beaches lose about 10 feet of width every year, and such losses were planned for when the project was engineered.

A survey to determine how much sand was lost during the storm and further work in areas already renourished could be performed with a new contractor in the future if congressional funding becomes available, Hunsicker said.

“So if there is a hurricane relief bill coming to Congress, the Army Corps will make efforts to apply that funding to restore the lost sand that we’ve just suffered in the last three days,” he said.

The renourishment project was planned to be completed Nov. 20 but could be delayed due to the storm.

People can visit mymanatee.org and search for “beach renourishment updates” for more information about the project.