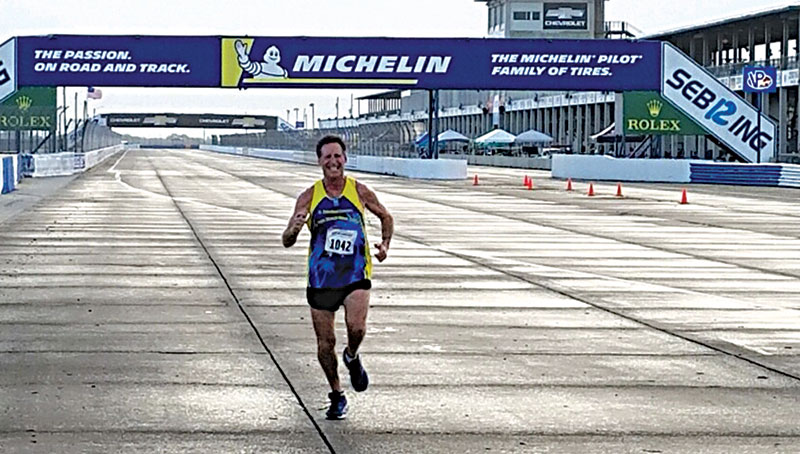 Mickey Hooke sprints down the backstretch of Sebring International Speedway during his fourth-place finish in the 10th Annual Run the Track race March 20 in Sebring. Islander Photo: Courtesy of Sebring Mayor John Shoop 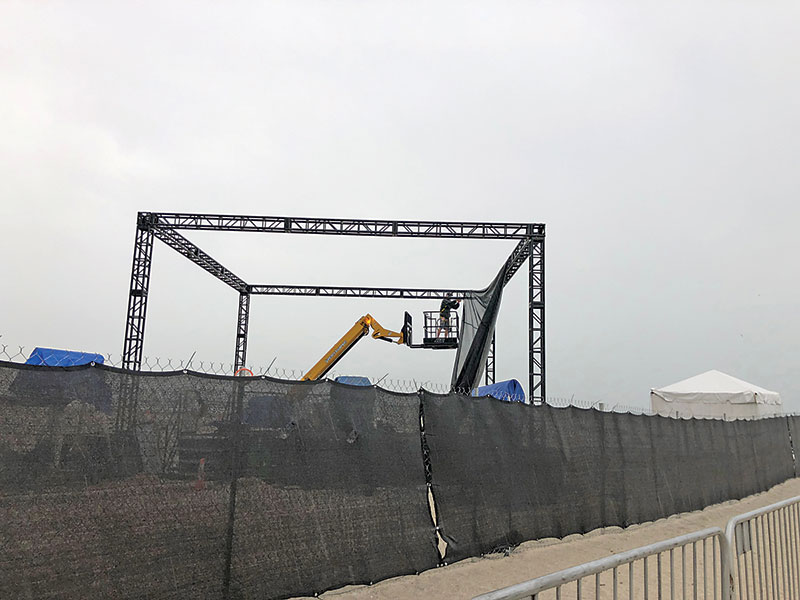 Staging for the World’s Strongest Man contest at the Manatee Public Beach is removed Nov. 11, as the event was relocated from Holmes Beach to a mainland facility due to the pounding from Tropical Storm Eta. Islander Photo: Lisa Neff

Mickey Hooke, longtime Galati Yacht Sales employee and former islander, made a successful return to competitive running in the 10th Annual Run the Track race at Sebring International Speedway. The race, originally scheduled for March 20, was postponed due to the coronavirus pandemic and ultimately rescheduled to Nov. 7.

And Hooke has plenty to brag about on his finish. He was beaten by 17-year-old, 41-year-old and 42-year-old finishers and he finished more than a minute ahead of the fifth-place runner.

With the pandemic knocking out most of the races that Hooke normally competes in during the year, he said his training has been sapped, but with a strong showing in Sebring, he’s looking forward to running.

Center sports pushed back by Eta

Adult sports at the Center of Anna Maria Island were rescheduled due to Tropical Storm Eta.

The adult flag football semifinals, originally scheduled for Nov. 12, were pushed to Dec. 3, when No. 2 seed Slim’s Place takes on No. 8 Gulfview Windows and Doors at 6:30 p.m. followed by No. 3 Sandbar Restaurant battling No. 5 Moss Builders in the second semifinal at 7:30 p.m.

The championship game between the winners will be played at 9 p.m. Dec. 3.

The adult soccer playoffs, which were to kick off Nov. 11, were moved to Nov. 18, with No. 4 Blalock Walters taking on No. 5 Ugly Grouper in the first quarterfinal match at 6 p.m. Signature Granite at No. 1 follows with a 7 p.m. kickoff against No. 8 Skinny’s Place. No. 2 Slim’s Place will take on No. 7 Solid Rock Construction at 8 p.m., while No. 3 Sato Real Estate will face No. 6 seed Progressive Cabinetry at 9 p.m.

Semifinal and championship game action is scheduled for Dec. 2, starting at 6:30 p.m.

Key Royale Club golfers got in a couple of early rounds before Tropical Storm Eta descended, closing the course for the rest of the week.

The men got in their nine-hole modified Stableford-system match Nov. 9. Fred Miller and Hoyt Miller both carded plus-3s to finish in a tie for first place. Ties were the thing, as Gary Alvord, John Cassese, Don Grau and Ken Nagengast all finished at plus-2 and in four-way tie for second place.

The women played a nine-hole individual-low-net match in three flights Nov. 10, that saw Helen Pollock fire a 2-over-par 34 to capture Flight A by a stroke over Jenny Hulbers and Roxanne Koche, who tied for second in the flight.

Billy Jean Pinson carded a 1-over-par 33 to grab first place in Flight B. Sue Christensen and Kay Neal each finished at 2-over-par 34 to tie for second in the flight.

Terry Westby and Meredith Slavin both fired 3-under-par 29s to finish in a tie for first place in Flight C. Judy Manchek was alone in second with 2-over-par 34.

Eta washed out Nov. 11 horseshoe action, leaving the winner of the Nov. 14 games with bragging rights for the week.

The team of Jerry Disbrow and Rod Bussey fashioned the lone 3-0 record in pool play during the Nov. 14 games, giving them the championship.

The center is accepting registration for its youth flag football league for players ages 4-17. Games will be played Tuesday nights, with an occasional Wednesday night matchup if necessary.

Cost for the league is $10 for members and $126 for nonmembers. The final day to register is Dec. 1.

The season kicks off with Spirit Day Dec. 15 and the regular season will get going Jan. 5.