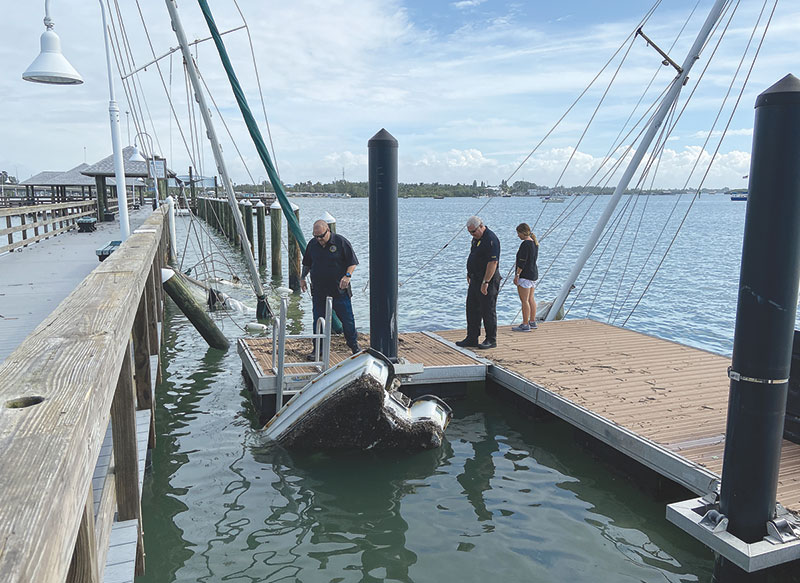 The cost for boat removal and pier repairs exceeds $175,000.

City commissioners voted 4-0 Nov. 13 to pay N.E. Taylor Boatworks up to $75,000 to remove and destroy five derelict vessels the storm sent crashing from the Bradenton Beach anchorage into the Historic Bridge Street Pier and its floating dock.

Bradenton Beach Police Lt. John Cosby said the storm jammed one vessel against the pier and left three sunken sailboats and a dinghy trapped beneath the floating dock.

He identified the owners of the vessels and was working with them to sign their property over to the city so the boats could be removed and destroyed.

Cosby said the contractor was confident they could remove the vessels without issue. He added that they could begin removing the vessels immediately, but did not detail when the work was expected to finish.

He said the city could reopen the floating dock after the vessels were removed because there were enough floats remaining to keep the structure stable.

“You should know that, if you approve this, there is the potential that we don’t get any of the money back,” Cosby said. “But it’s about $30,000 less than I thought it was going to be, so it appears to be a good price.”

He added that he was speaking with the city’s insurance agent to determine whether its policy for the pier would cover some expenses.

Mayor John Chappie said he was coordinating with county staff in pursuit of potential West Coast Inland Navigational District funding to reimburse the cost of removing and destroying the vessels.

“Maybe we can get some of it back,” Chappie said.

The sunken vessels also dislodged eight floats from the dock’s underside, damaged several rollers and a section of the pier’s composite decking.

Sarasota-based Duncan Seawall estimated repairs to the pier and floating dock would cost around $98,000, according to Cosby.

However, Cosby said the city should wait to consider the repairs until it could determine how much money it could get to cover the damages.

The city’s police boat and boat lift at the pier survived the storm unscathed.