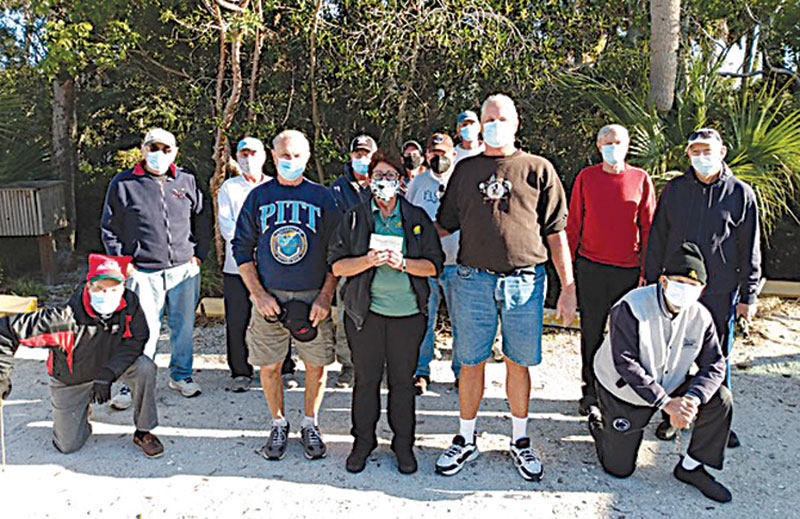 The coronavirus-safe, masked-up Anna Maria Island horseshoe pitchers pose with Cindy Sloan of the Food Bank of Manatee after making a $400 donation to the nonprofit’s cause at the Dec. 9 games. Islander Photo: Courtesy Jay Disbrow

The women took over the course Dec. 8 to play a nine-hole, individual-low-net match in two flights.

Jenny Huibers rode a birdie on the sixth hole to an even-par 32 to capture first place in Flight A. Sue Wheeler and Ellen Boin were tied for second with matching 2-over-par 34s.

Other highlights include Judy Menchek and Terry Taylor carding chip-ins on the ninth and fourth holes respectively.

The men were back on the course Dec. 10 for their weekly nine-hole team scramble. Brian Comer, Art McMillan, Fred Miller and Joe Tynan matched the 5-under-par 27 carded by the team of Buddy Foy, Eric Lawson, Peter Lund and Nub Turner for a tie for first place. Not sure who had to buy drinks in the clubhouse after the round.

Shifting to the horseshoe pitts in Anna Maria, two teams emerged from pool play and battled for the day’s championship during Dec. 9 horseshoe action at the Anna Maria City Hall horseshoe pits.

Tom Farrington and Tim Sofran cruised to a 21-11 victory over Bob Lee and Steve Hooper to earn bragging rights for the day.

Two teams also advanced to the knockout stage during the Dec. 12 games. Sofran again found himself in the mix, this time teamed up with Adin Shank, taking on Bob Heiger and Steve Ruddock. The Heiger-Ruddock team jumped out to an early lead, but Sofran and Shank staged an impressive rally to earn a 21-11, come-from-behind victory.

There is no charge to join the players and pitch in Anna Maria and everyone is welcome.

Sports at the Center of Anna Maria Island in Anna Maria had a quiet week, with the youth flag football league holding tryouts for the season that starts its competitive schedule post-holidays in January.