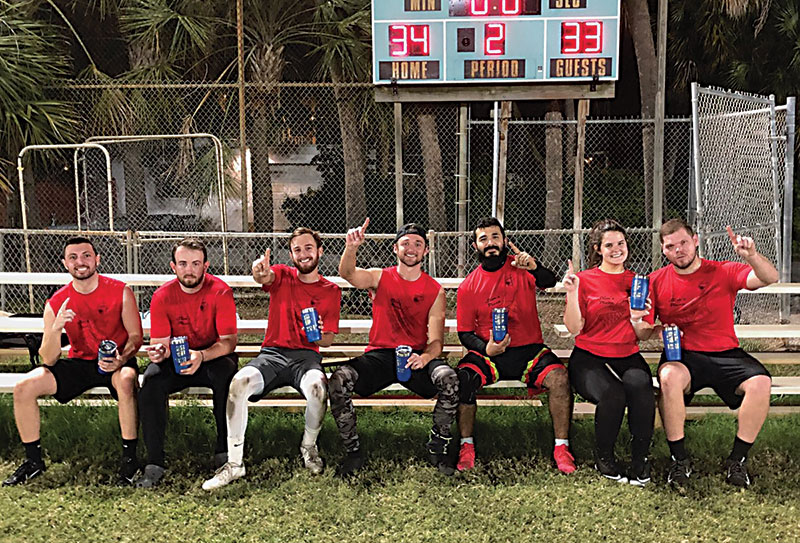 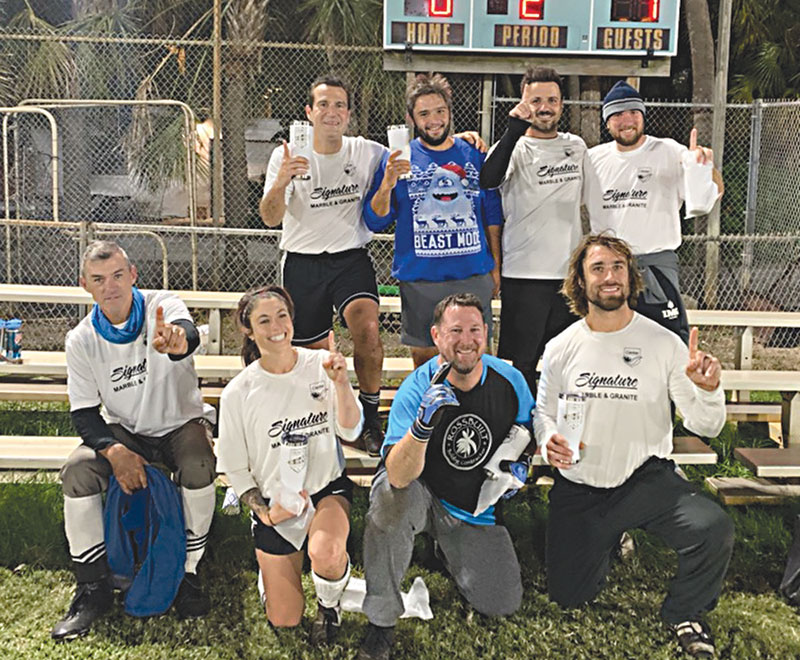 The adult sports leagues at the Center of Anna Maria Island are nothing if not highly competitive.

The fall flag football and soccer seasons for the adult players at the Center of Anna Maria Island came to a close Dec. 2-3.

The Dec. 3 flag football finals were first set for Nov. 12, but Tropical Storm Eta and the Thanksgiving holiday pushed the games back.

Chris Scott had a goal and an assist and Ben Sato scored a goal to lead Ugly Grouper, which also received an assist from Greg Ross and 10 saves from Nate Welch in the loss.

The second semifinal game was another blowout, as Slim’s Place cruised past Sato Real Estate by a 9-3 score behind four goals from Kevin Roman and two goals each from Clancy Vaughn and Brent Moss. Ryan Moss nailed down the victory with seven saves.

The championship game that followed was all Signature Granite in a 7-0 victory behind three goals from Lieb and two goals and two assists from Styken. Dumaz chipped in with a goal and two assists and Crean completed the scoring with a goal.

Championship night for the flag football league resumed Dec. 3 with Slim’s Place defeating Gulfview Windows and Doors 23-12 in the first semifinal match behind strong all-around play from Dominick Otteni and Connor Haughey. Otteni had five catches, including two for touchdowns, while also contributing two quarterback sacks on defense. Haughey notched a touchdown catch and two interceptions, including one he returned for a touchdown.

Sandbar Restaurant slipped past Moss Builders by a point behind Chase Richardson, who threw a touchdown pass to Anthony Mannino, ran for another touchdown and punctuated his night with a pick-six interception.

Moss was led by Jonathan Moss who threw for a touchdown, caught a TD pass from brother Ryan Moss and added a 2-point conversion and a safety. Evelyn Long had a game-high six receptions, including one that went for a TD, while Cole Carter added an extra point to round out the scoring in the loss.

The championship game that followed was a barn-burner. Slim’s Place outlasted the Sandbar by a 34-33 margin behind a strong game from Connor Haughey. Haughey threw for three touchdowns, caught two and added a two-point conversion while also chipping in with an interception on defense.

McQuillen threw for two touchdowns and added a two-point conversion. Otteni finished with two touchdown receptions and Luis Campos had one to round out the scoring for the champs.

For the Sandbar, Richardson threw four TD passes, including three to Mannino, who also chipped in with a pick six and an extra point. Tim Holly finished with a touchdown grab and Dylan Doyle had a 2-point conversion to complete the scoring for Sandbar in the loss.

There was another full week of good weather and golf at Key Royale Club in Holmes Beach, starting Nov. 30 with the men’s nine-hole modified-Stableford match. Eric Lawson grabbed first place with a plus-5, two points ahead of second-place finishers Art McMillan and Steve Vasbinder.

They played a nine-hole individual-low-net match Dec. 1 in two flights.

A chip-in on the eighth hole helped Roxanne Koche fashion a 3-under-par 29 and snag first place in Flight A by three strokes over Pam Lowry, who finished alone in second at even-par 32.

Barb Harrold carded a 1-under-par 31 to give her a one-stroke margin of victory in Flight B over Sue Wheeler and Susan van Orsdel.

The men were back on the course Dec. 3 for a nine-hole scramble that saw Dale Hudson, Eric Lawson and Ron Vandeman match the 3-under-par 29 carded by Brian Comer, Larry Pippel and Debi Richardson for a two-way tie for first. In second, John Cassese, Mike Clements and Kurt Snoufler finished at 1-under-par 31.

The action was short and sweet during Dec. 2 horseshoe action at the Anna Maria City Hall horseshoe pits. Team Bob — Bob Mason and Bob Palmer — posted the lone 3-0 record during pool play and were rightfully crowned champs for the day.

Two teams emerged from pool play to battle for bragging rights during Dec. 5 action. Bob Palmer again found himself in the mix, this time flying, er walking solo. Palmer stayed hot, cruising to a 23-4 victory over Bob Lee and Jay Disbrow, giving him bragging rights for the week.