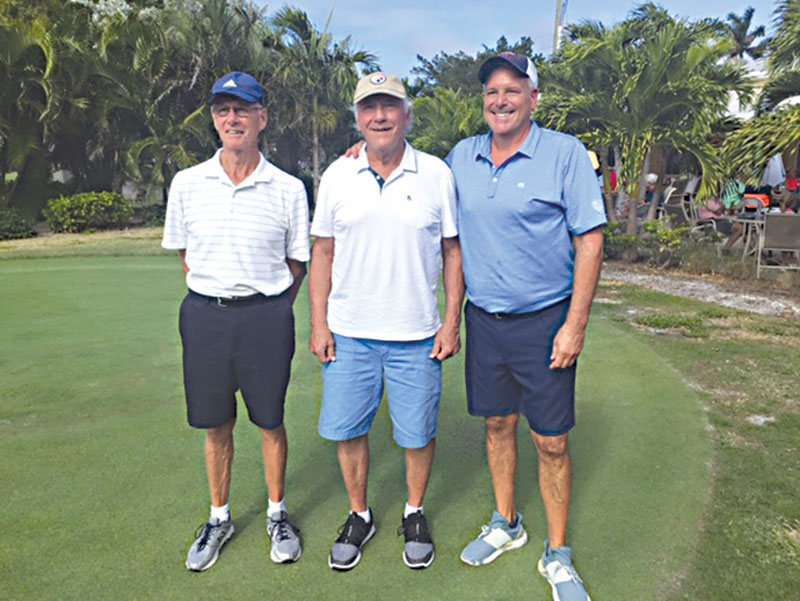 Larry Pippel, Nelson Eagle and Steve Vasbinder pose after carding the 2-under-par 30 that gave them first place in the “Welcome Back Scramble” Nov. 21 at the Key Royale Club in Holmes Beach. Islander Photo: Courtesy Tom Nelson

The Key Royale Club hosted a “Welcome Back Scramble” Nov. 21 for returning winter friends, with 59 members teed up for the match.

First place went to the team of Nelson Eagle, Larry Pippel and Steve Vasbinder who combined for a 2-under-par 30.

Other notables in the challenge were Debi Wohlers, who nearly sank her tee shot on the eighth hole to win the women’s closest-to-the-pin honors at 14 inches, and Tom Solosky, who won for the men with a shot that landed within 16 feet of the pin.

Following the match, members enjoyed refreshments and snacks under the club’s new awnings.

Hulbers also was part of the winning team of Jon Holcomb, Terry Schaefer and Steve Vasbinder.

The women were out Nov. 24 for a nine-hole individual-low-net match in four flights.

Jenny Hulbers fired a 4-under-par 28 to run away with first place in Flight A by four shots over second-place finisher Roxanne Koche.

Pam Alvord’s 1-over-par 33 gave her first place in Flight B by a stroke over Barb Harrold.

Ellen Boin and Carol Duncan had chipins on the third and fifth holes, while Margrit Layh birdied on No. 8.

The men closed out the club action for the week Nov. 25 with a nine-hole scramble. The team of Ken Butler, Tim Donner, Tom Solosky and Joe Tynan combined on an 8-under-par 24 to grab clubhouse bragging rights for the day.

The team of Gerry Dahl, Jon Holcomb, Betsy Meyer and Ken Nagengast matched the 3-under-par 29 carded by Gary Alvord, Mike Clements, Art McMillan and Ron Vandeman to finish in a tie for second.

The team of Tim Sofran and Gary Howcroft drew the lucky bye into the finals and watched as Bob Lee and Bob Hawks sprinted past the walker, Bob Mason, by a 21-5 score to advance to the championship game. Lee and Hawks stayed hot in the final, cruising to a 22-13 victory and earning the day’s bragging rights.

The Nov. 28 games saw another three-team playoff, with Neil Hennessey getting the bye. Lee was back in the playoff, this time teaming up with Jerry Disbrow to defeat Sofran and Rod Bussey 23-20 for the advance to the finals. Lee and Disbrow then easily dispatched Hennessey 23-5 to win the day’s proceedings.

The Center of Anna Maria Island is planning the season of flag football league for players ages 4-17.

Games will be played Tuesday nights, with an occasional Wednesday night matchup.

The season will kick off with Spirit Day Dec. 15, while the regular season will get going Jan. 5, after the winter holidays.