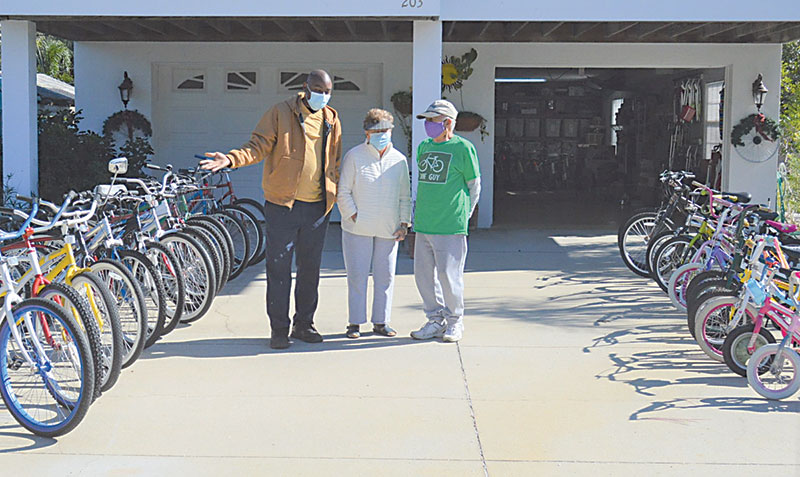 Charles Wade, left, motions Dec. 18 to an array of bicycles, as Roberta and Carl Augostini look on. Carl Augostini repairs and donates the bikes as a hobby. Islander Photo: ChrisAnn Allen

“Every kid should have a bike,” Carl Augostini said Dec. 18.

And for about 15 years, he has made that dream a reality.

Augostini accepts donations of bikes in disrepair throughout the year, then fixes them so the bikes can be donated to children and adults who could not afford such a purchase.

Charles Wade, the facility administrator at Roser Memorial Community Church and Food Pantry in Anna Maria, said he works with Augostini each year to deliver the bikes to needy people in the community — Roser congregants and other adults and children.

“It just came out of the blue that some people were asking for bikes,” Wade said. “I asked Carl if he had a couple, and he said he had about 20 bikes he had fixed up. I was blown away.”

Augostini’s daughter, Carla Dobbertin said, “He is a retired electrical engineer, but his skills run much deeper than that.”

Since 2005, Augostini has fixed and donated hundreds of bicycles — usually 20-25 each year.

What started as a hobby became a passion.

And he fulfilled a need.

“I just enjoy rebuilding them, painting them and putting on new parts as needed,” Augostini said. “And I love seeing the pictures Charles sends of the kids enjoying their bikes. It is just the best.”