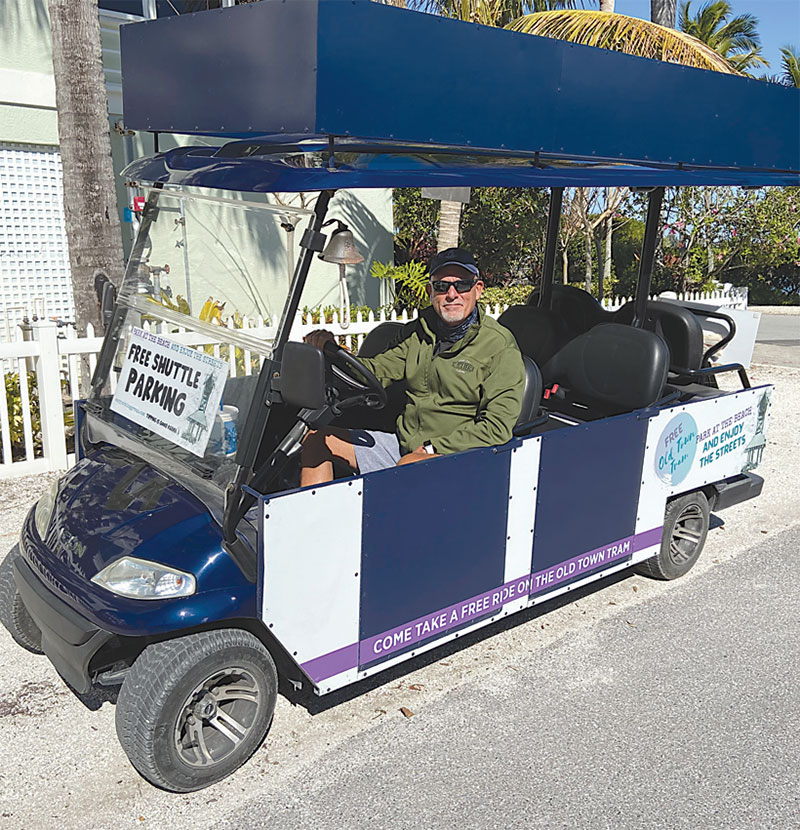 The Bradenton Beach tram has been shuttling passengers between the beach and the business district for two months.

But much about the Community Redevelopment Agency’s service remains unfinished.

The tram has built up a small but consistent ridership, averaging 108 people per day, according to its operator, Easy Parking Group.

From Dec. 1-27, tram operators serviced 2,980 passengers — 110.3 per day — aboard the low-speed vehicle. The tram set its highest single-day ridership of 173 passengers on Christmas Day.

The report did not provide ridership information for Dec. 28-31.

The most popular stops along the route were “beach parking,” the Bradenton Beach Police Department on Highland Avenue and the Daiquiri Deck at 107 Bridge St.

City attorney Ricinda Perry, appointed by the CRA to coordinate the project, told the CRA membership that revenue for advertisements on the tram fell short of expectations.

The tram is intended to transport people between the large parking lots at the Coquina and Cortez beaches and the CRA district, where parking is limited. The service is functionally similar to the island’s fare-free trolleys but the route is limited to the beach parking lots and Bridge Street and the surrounding commercial district.

The CRA had hoped to subsidize its budget for the tram with ad revenue.

Five merchants agreed to advertise on the tram for a total of $2,475 per month — far below the $8,675 monthly cost of running the service.

“The money’s not there,” Perry said. “We’re asking. We’re just not receiving as much as we hoped when it comes to advertising.”

“Nobody wants to invest in a concept, they want to invest in proof,” she added. “We’re still building that proof.”

Perry said the CRA would need more information from Easy Parking on stops, but she hoped to identify specific stops before the next meeting in February.

The tram is set to cost the CRA $113,150 over the course of the yearlong pilot program. The CRA’s contract with Easy Parking will expire Nov. 1, 2021, but can be extended or terminated at any time.