Nearly 100 people — some in costume, some in swimsuits — splash Jan. 1 in the Gulf waters to raise money for charity as part of Clancy’s 13th annual Shamrock Shiver. 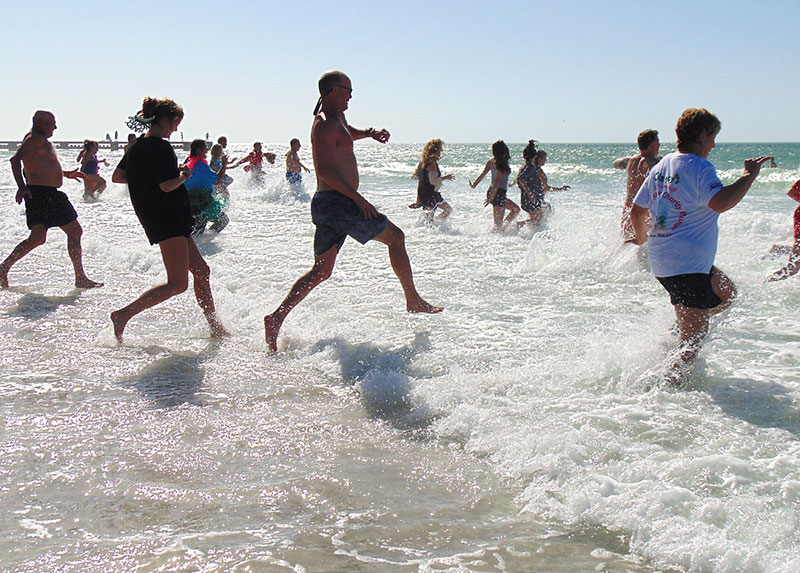 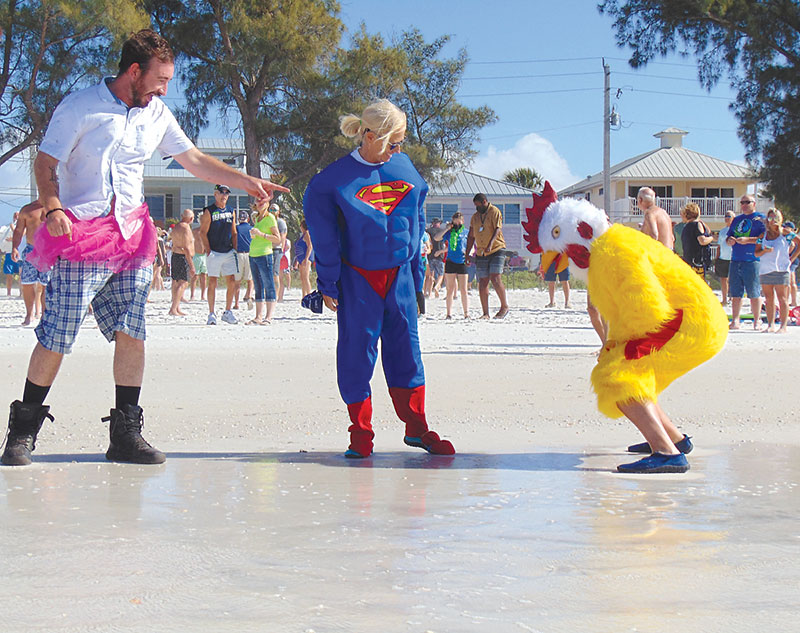 James Lightfoot, left, as Ace Ventura, Superwoman RuthAnn Hopkins and Barry Hopkins, the chicken, enjoy a few laughs while waiting for the plunge. 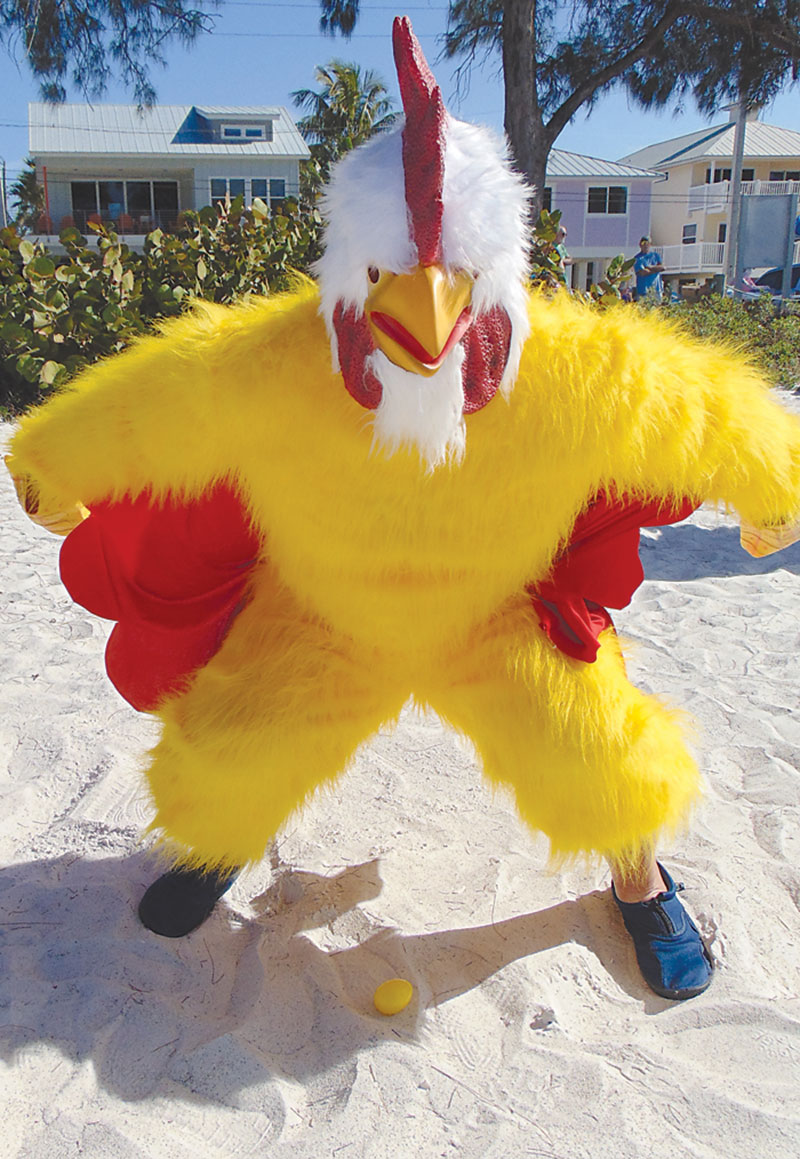 Barry Hopkins of Bradenton lays an egg Jan. 1 while waiting to plunge into the Gulf of Mexico for the 13th annual Shamrock Shiver. 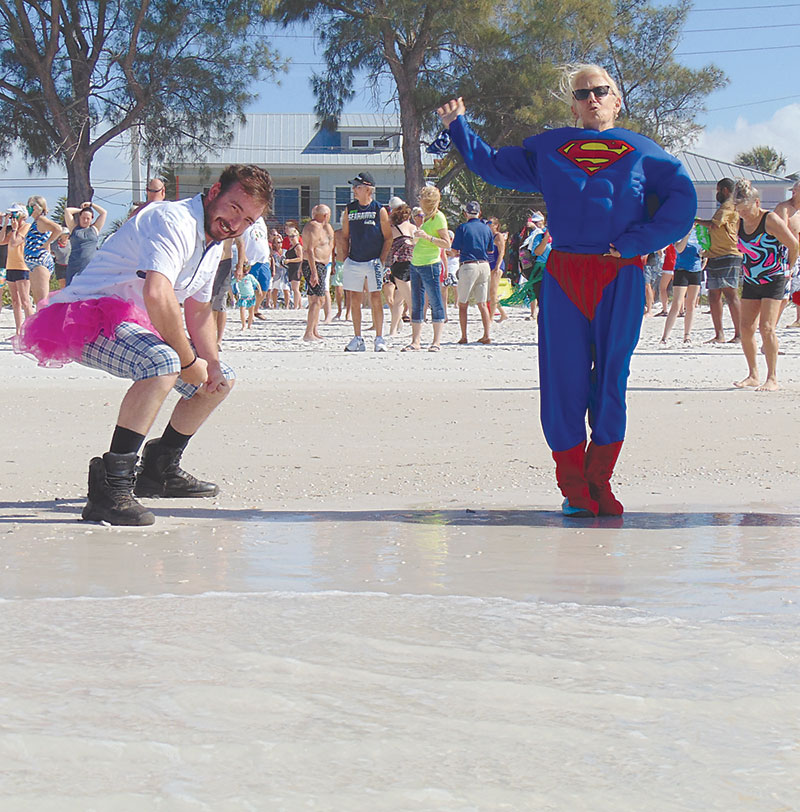 James Lightfoot, left dressed as Ace Ventura, and RuthAnn Hopkins ready themselves Jan. 1 to plunge into the Gulf along with nearly 100 others who took part in the 13th annual Shamrock Shiver. 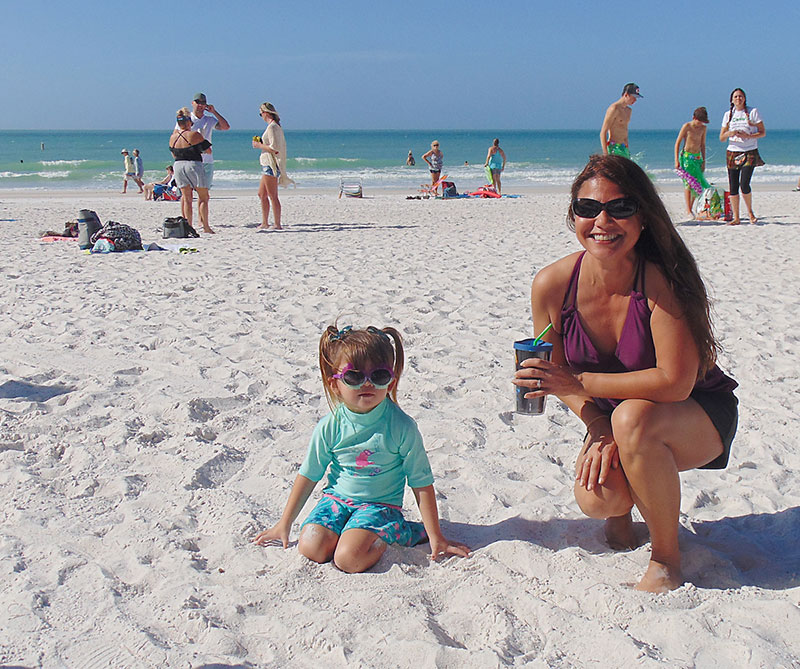 Madeline, 3, left, and mom, Karen Haacke, check out the sand before plunging into the Gulf. Madeline first participated as a 3-month-old, and she’s plunged every year since. 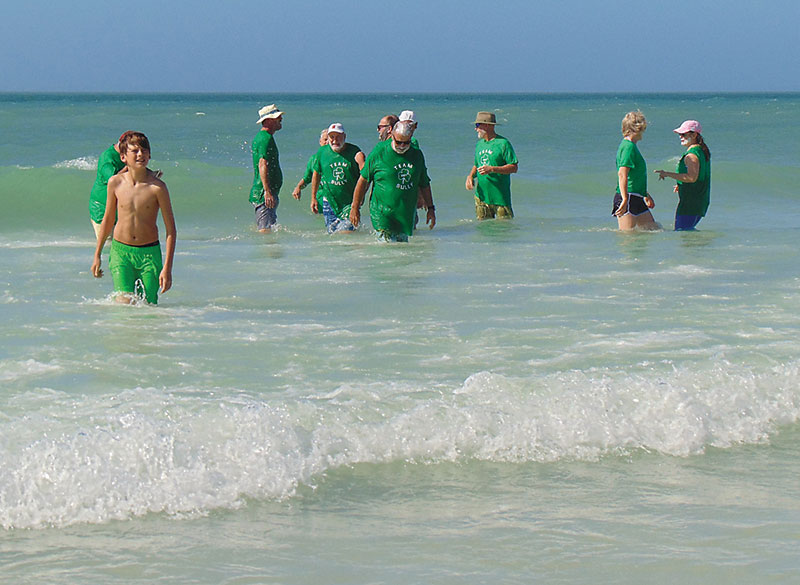 A group of friends take a few minutes Jan. 1 to splash around in the Gulf after charging in for the 13th annual Shamrock Shiver. 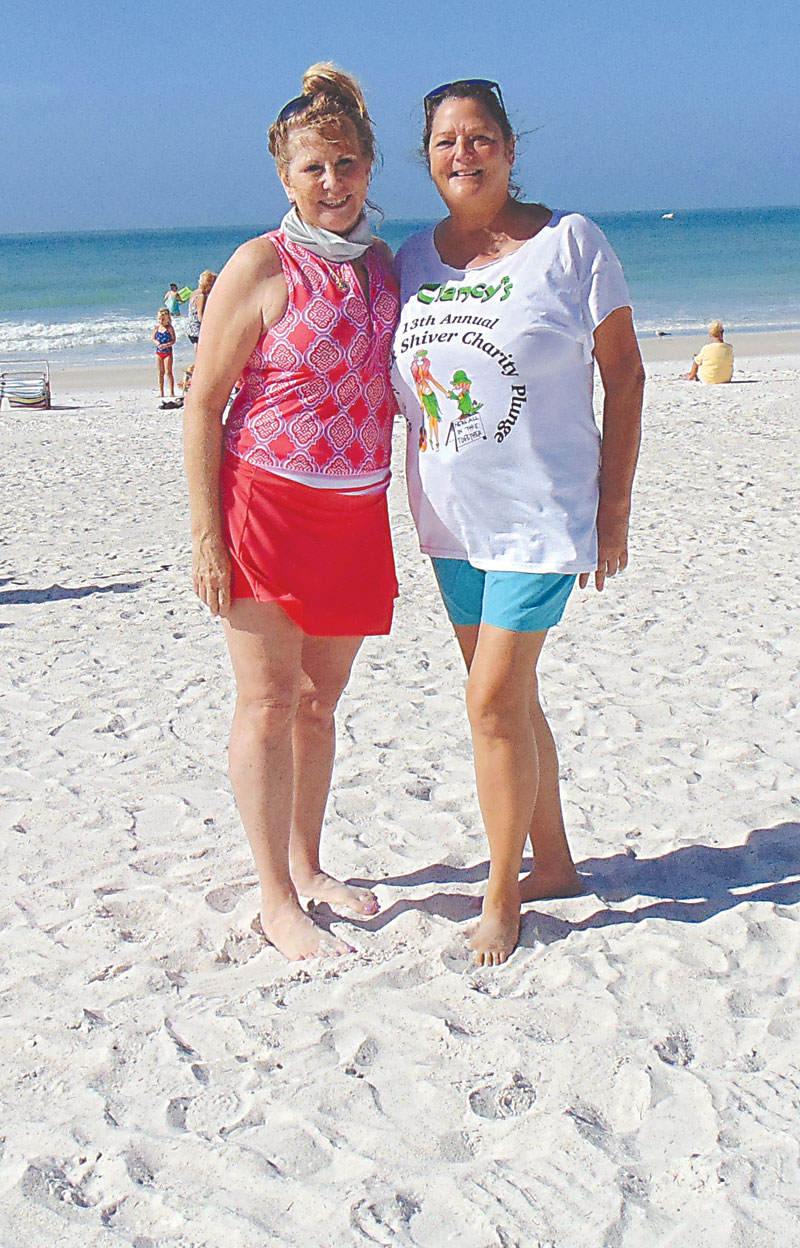 Running headlong into the Gulf of Mexico was a great way to start 2021.

Nearly 100 people thought so, anyway, as they gathered Jan. 1 on the shore at Cortez Beach, between Fourth and Twelfth streets south along Gulf Drive in Bradenton Beach, for Clancy’s 13th annual Shamrock Shiver.

Though the noon sky was clear and the temperature on the beach 82 degrees, plunger James Lightfoot of Bradenton said the water was cold.

“This is the first time I did this, and the water was cold, but I’m glad I did it,” Lightfoot said after emerging from the Gulf.

NOAA’s water temperature table for the Gulf of Mexico put the temp at about 65 degrees.

Lightfoot, dressed as Ace Ventura, was one of more than a dozen people dressed in costume for a crowd-judged contest.

What got the most laughs and love from the crowd? A group of friends donning costumes and holding signs that expressed their opinion of 2020.

Mark Gritz wore an inflatable poop emoji costume while his wife, Patty, was made up as a bottle of hand sanitizer and friends Robert Nott and Shona LaBaff wore giant rolls of toilet paper messages.

Barry Hopkins dressed as a chicken and laid (dropped) yellow plastic eggs on the beach to the onlookers' delight. His wife, RuthAnn, arrived as Superwoman “to save the day.”

Other costumed plungers taking part in the contest were dinosaurs, a man in a hospital gown open in back to reveal a fake tush and some hula dancers.

The plunge began in 2009 with a group of friends who frequented Clancy’s outdoor Tiki Bar and preferred to do something fun to raise money for charity as an alternative to the traditional holiday parties, Rayma Stowe said.

Stowe — past proprietor of the Rod & Reel Pier —  is a founding member of the event and her Bradenton restaurant and bar, Clancy’s Irish Pub and Sports Bar, 6218 Cortez Road W., Bradenton, annually sponsors and hosts the event, which includes an after-party with music, raffles and food and beverages.

“And it keeps us off the streets New Year’s Eve,” joked Lisa Pierce, Stowe’s friend and another founder of the charity event.

Over the years, Clancy’s has helped raise $273,500 with the Shamrock Shiver.

The Islander newspaper was a sponsor this year.

The 2020 shiver proceeds, which Stowe estimated at more than $25,000, will be divided among four local charities: The Blessing Bags Project, Feeding Empty Little Tummies, Healthy Teens Coalition of Manatee County and Parenting Matters.

Donations will be accepted until at least Jan. 8 — either at Clancy’s or online at clancysirishsportspub.com, Pierce said.

For more information, go to clancysirishsportspub.com or call Stowe at 941-720-4072.