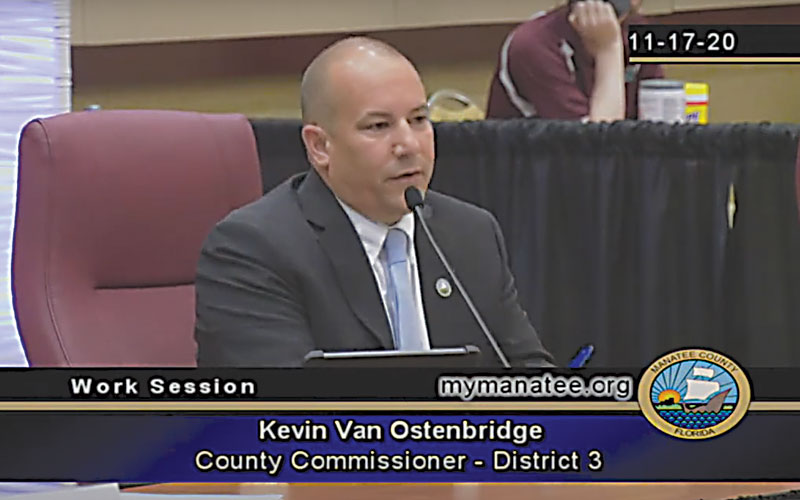 He said he wants civility.

In a Dec. 22 interview with The Islander, Van Ostenbridge, elected Nov. 3 to succeed Stephen Jonsson on the county board, made his case.

“The island is a destination,” he said. “But we want to ensure that we are giving Holmes Beach the resources they need to enforce local laws and policies and that the property of residents in Holmes Beach is being respected by visitors.”

He said he planned to meet with Anna Maria, Bradenton Beach and Holmes Beach mayors about parking. “I don’t want masses of visitors running roughshod over the locals,” he said. “At the same time, I feel strongly that the beach belongs to everyone and is has to be accessible to all residents of Manatee County. The beach is the crown jewel of the county.”

In late April, Holmes Beach commissioners agreed to a plan drawn up by Mayor Judy Titsworth and Police Chief Bill Tokajer to remove more than 1,000 on-street parking spaces after beaches reopened following restrictions and parking limits due to concerns with the spread of the novel coronavirus.

In September, the city scaled back its restrictions, opening some areas to permit-only parking for residents and property owners.

Titsworth said the reduction in on-street parking was intended to help with resident complaints of noise, trash and parking problems caused by a daily influx of day-trippers.

Van Ostenbridge said Nov. 17 that he would not support participation in future beach renourishment projects in Holmes Beach unless the city provides more parking.

“I hope 2021 will bring an improved level of civility to Manatee County Commission meetings,” he said. “And that will increase our level of productivity.”