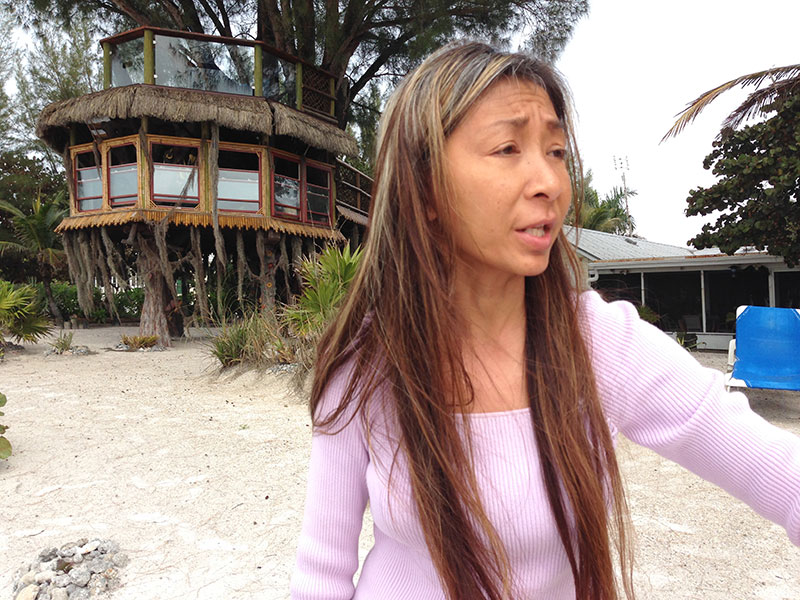 Lynn Tran-Hazen orders people on the beach to leave her property in 2014. Islander File Photo

Lawsuits come with a cost.

A treehouse built without permits in Holmes Beach in 2011 has resulted in four pending lawsuits with the city and Florida Department of Environmental Protection lasting nearly 10 years, with a new plea by the treehouse owners to the U.S. Supreme Court.

Acting without legal representation, property owners Richard Hazen and Lynn Tran-Hazen filed a writ of certiorari with the U.S. Supreme Court Dec. 22, 2020, in a further attempt to keep the “Robinson Crusoe-style” treehouse — illegally built within the setback for the state’s erosion control line — from being removed by the city.

A writ of certiorari requests that the lower court send up the case for review by the high court. The case in the lower court was denied a review and hearing in spite of numerous opportunities afforded the Hazens to correct defaults in their case.

More recently, the city declined to renew the Hazens’ vacation rental certificates for their four short-term rentals — based on noncompliance with the treehouse orders, including demolition and daily fines — and the Hazens apparently have defied the city by continuing to allow occupancy at Angelino’s Sea Lodge.

The Hazens also reside at the multi-unit property in the 2800 block of Avenue E in Holmes Beach.

They are on a path toward a new hearing before a city-appointed magistrate, where they could be fined for renting without a vacation rental certificate.

And now, the owners have initiated a web campaign to raise funds to help with their fight.

The online funding page was created Jan. 2. On it, Tran-Hazen wrote, “My husband, Richard and I need to raise funds for our Tree of Love for Justice and Liberty. Under color of laws, we are losing our rights to use and enjoy our property, to grow trees and plants that we love, to rent for income and to have equal access to fair justice faster than sea level rise, storm erosion or climate change.”

In a Jan. 7 interview with The Islander, Tran-Hazen said the city and the DEP have until Feb. 3 to respond to the certiorari.

According to Tran-Hazen, the couple has spent more than $170,000 on legal fees for their lawsuits and can no longer afford attorney representation.

The city has noticed the couple that their vacation rental license for the property will not be renewed until they comply with city orders, including payment of nearly $100,000 in code violation fines.

“We have issues that we raised in our document that we feel are very important to pro se litigants like us that can no longer afford lawyers,” Tran-Hazen said.

A story in the Jan. 6 Islander incorrectly stated the owners of the beachfront treehouse in Holmes Beach had filed a plea with the Florida Supreme Court. The plea was filed with the U.S. Supreme Court.