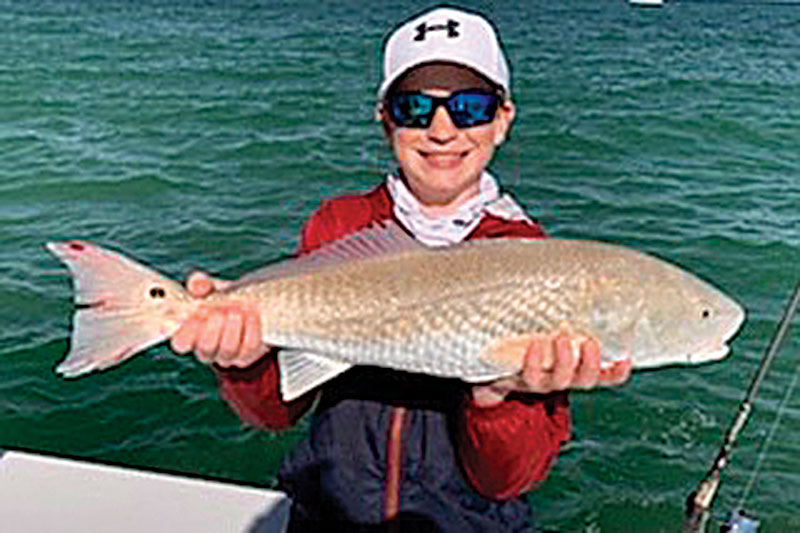 Mitchell Keith of Chicago shows off a nice redfish Jan. 6 that decided to eat a pompano jig. The fish was released. Keith and her crew were fishing with Capt. David White of Anna Maria Charters.

With frequent cold fronts and variable air temperatures, fishing around Anna Maria Island is comparable to riding a roller coaster.

On cooler, windier days during the fronts, fishing is slightly challenging. With temperatures in the low to mid 50s, it’s hard to muster up the motivation to get out on the water. But have no fear, within a couple of days, temperatures are back on the rise and sometimes exceed 80 degrees.

Between the fronts are when it’s most advantageous to get out and fish. Not only are the clients more comfortable, but the fish seem to cooperate better.

On these warmer days, venturing into Tampa Bay or the Gulf of Mexico is proving to be good for sheepshead. Try the artificial reefs if you don’t already have a spot picked out. By bottom fishing shrimp you can lure a sheepie to the hook, as well as Key West grunts, mangrove snapper, porgies and some hogfish.

And, if you’re willing to go offshore in depths of 100 feet or more, you may be rewarded with amber jack, as well as some large mangrove snapper.

Staying inshore in the bays and Intracoastal Waterway has advantages. Drifting and jigging over deep grass flats is yielding pompano, as well as bluefish, ladyfish and catch-and-release spotted seatrout. If jigging isn’t your thing, try canal fishing for sheepshead, black drum or catch-and-release redfish. A live shrimp on a weighted rig will put you on the fish.

Lastly, casting shrimp along the beaches is producing some whiting, black drum and pompano.

On my Southernaire charters, I’m finding catch-and-release redfish around docks and seawalls, with some black drum and sheepshead mixed in for folks who want to bring a fish or two home for dinner.

Fishing along the beaches with jigs tipped with shrimp is providing some pompano action, as well as some whiting and small sheepshead.

Lastly, bottom fishing for sheepies around the wrecks and reefs in the Gulf seems to be getting better as the winter progresses.

Capt. Jason Stock is hooking into large amberjack offshore in fishing the waters west of Anna Maria Island. Fishing over wrecks and springs is producing amberjack up to 85 pounds.

Fishing ledges and hard bottom offshore is yielding plenty of porgies, with some hogfish in the mix. For these fish, a bottom rig combined with shrimp is working well.

Stock also is hooking up some tripletail after close inspection of floating debris.

Capt. David White is fishing the inshore waters of Tampa Bay on days when the wind makes it difficult to go offshore. On these windy days, White is finding black drum and catch-and-release redfish around residential canals and docks. Sheepshead are involved in this bite. All three species are readily taking live shrimp offerings.

Along the beaches and passes, White is casting small jigs tipped with shrimp, which is resulting in some pompano, as well as ladyfish and whiting.

Lastly, on the flats, bonnethead sharks are keeping younger kids entertained while the adults are targeting catch-and-release snook.

Capt. Aaron Lowman is patrolling the beaches for a variety of species. Anchoring away from the beach and casting toward shore is resulting in black drum and sheepshead, as well as a few pompano. Live shrimp on a weighted rig or small shrimp-tipped jigs are working well in this scenario.

Around residential docks and canals, Lowman is finding some catch-and-release redfish, as well as sheepshead. Again, shrimp is the bait of choice.

Finally, venturing offshore to ledges and hard bottom is proving to be good for hogfish, porgies, Key West grunts and snappers. Tripletail are present in areas wherever there is floating debris.

Jim Malfese at the Rod & Reel says black drum are the most frequent catch. Casting live shrimp on a bottom rig under the pier is yielding the best results. Most of the black drum are 15-20 inches. While fishing in this manner, anglers are hooking into sheepshead and an occasional catch-and-release redfish. Surprisingly, Malfese says there are snook hanging around the pier, although none were gullible enough to take a bait.