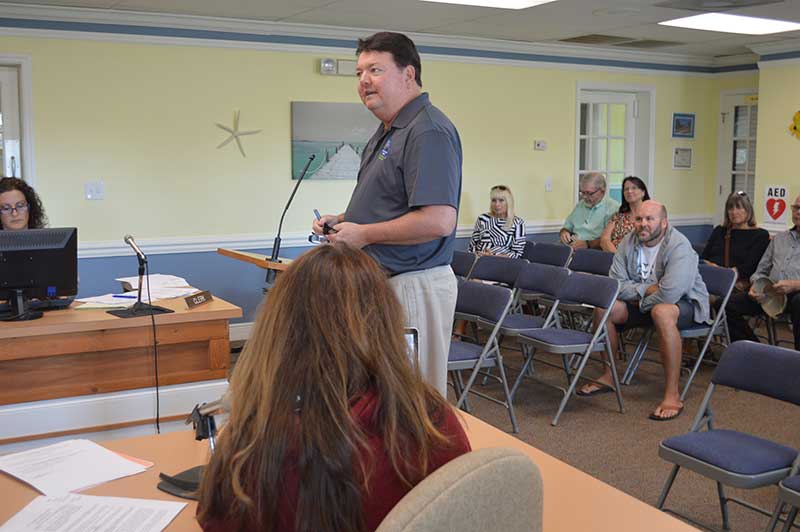 It’s deja vu all over again for the Bradenton Beach Community Redevelopment Agency.

Bradenton Beach is again expanding its community redevelopment agency to include two representatives — and both are business owners — restaurateurs — in the district.

Ed Chiles of Anna Maria, owner of the Beach House Restaurant, and John Horne of Bradenton, principal owner of Anna Maria Oyster Bar on the city pier, were appointed Nov. 17 in a unanimous vote by the city commission.

Chiles was a representative member of the CRA in 2009 during a short-lived citizen expansion of the CRA, before it reverted to a five-member board comprising the city commission in 2010.

The commission, sitting as the community redevelopment agency, unanimously voted Nov. 2 to change its bylaws — to appoint two additional members.

The bylaws state the members have to be either residents or business owners in the district, which is between Cortez Road, Sarasota Bay, Fifth Street South and the Gulf of Mexico, including the Historic Bridge Street Pier.

The agency decided both members would serve staggered four-year terms, one beginning with the two new city commissioners and the other being a “partial four-year term,” timed according to the mayor’s two-year election term.

At its Nov. 16 workshop meeting, the CRA discussed the applicants, made nominations and approved the appointments.

Before discussing the applicants, Bradenton Beach Mayor Bill Shearon asked city attorney Ricinda Perry whether the CRA is considered a “board of the city.”

Perry said it is not.

CRA Chair Ed Straight made a point of order and asked Shearon about the nature of his objection.

Shearon said if the CRA is a board of the city, it must follow the city charter, which says the board does not have the authority to appoint members.

Perry responded, “The CRA is an agency, not a board, and you are a member of it.”

Perry the CRA and the city have an interlocal agreement that allows the CRA to receive city funding for projects in the district. The CRA was created under state statute, which overpowers the city charter, she said.

Shearon said the statutes are confusing and he did not agree with Perry’s assessment.

Straight made a motion to determine whether other board members were confused and in favor of the mayor’s objection.

The objection failed 1-4 with Shearon the only member in favor.

Following a 10-minute recess, the CRA members returned to the dais to discuss the applicants.

Commissioner Jake Spooner asked Perry if the two new members need to be one each, a business representative and a resident of the district.

Perry said, according to the bylaws, both members can be either a business owner or a resident.

All of the CRA members said the applicant pool was strong and it was a difficult choice.

Perry said “dual office holding could be a problem” with one of the applicants, Reed Mapes, who also is a member of the city’s planning and zoning board.

No person can serve in more than one municipal office at the same time — elected or appointed — according to the state statute governing the CRA.

Mapes was not present Nov. 16 to state his preference for the P&Z or CRA.

“It is my opinion, as chair of the CRA, that Mapes should be disqualified,” Straight said.

The rest of the members agreed with Straight and Mapes’ application was withdrawn.

Spooner asked if applicants are prohibited from being members of any city board, including Scenic WAVES Partnership Committee.

Perry said Scenic WAVES membership is not a conflict because the members don’t make “binding decisions.”

Thomas Burdy and Bill Vincent, a recent candidate for the Ward 4 commission seat, spoke for themselves as residents of the CRA district.

“I have the highest and best intent for the city and I think this is evident by my attendance at all the city meetings,” Vincent said.

Business representative applicants in the district, including Jack Clarke, executive director of the Bridge Street Merchants, and Walter Loos, owner of Adventure Away, along with Horne, were next to approach the dais.

“I feel like an island boy — I’ve lived here for 20 years,” Horne said. “I think the CRA district is awesome and I’d love to be a part of it.”

There was no additional public comment as the CRA members resumed their discussion.

Outgoing Commissioner Jan Vosburgh said she thought both Bill Vincent and Jack Clarke would be assets to the agency. She also noted that Horne and Chiles have “added so much to the community over time.”

Spooner, whose term on the CRA and commission will end in November 2017, said Clarke, Chiles and Horne were his top choices.

Shearon said he thought the new members should be a resident and a business representative “for two different perspectives.”

Members made their nominations for the full four-year term position.

The nominations for Clarke and Vincent failed with one vote each and Chiles was voted into the position 4-1, with Spooner the dissenter.

Next came nominations for the partial term.

Horne was appointed with a 4-1 vote, with Spooner the naysayer.

Speaking to The Islander following the workshop, Tjet Martin, CRA district resident and Scenic WAVES chair, said, “I think it should have been a business person and a resident — that was the point.”

At the Nov. 17 city meeting, the commissioners unanimously voted to adopt the joint resolution to allow appointment of the two new members to the CRA.