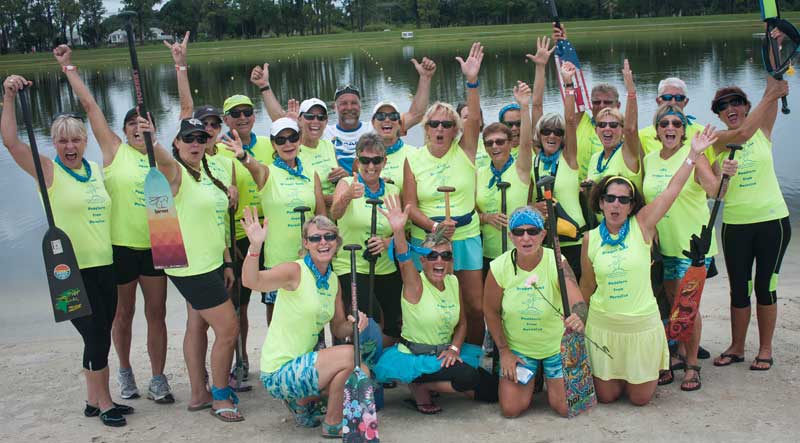 All for one, oar for all Members and supporters of the Anna Maria Island Paddlers of Paradise celebrate taking home the gold June 3, having competed at the Suncoast International Dragon Boat Festival. The team consists of 20 paddlers, a drummer and a steerer. Their next competition will be Oct. 1 for the Race for the Cure Dragon Boat Festival at Nathan Benderson Park, 5851 Nathan Benderson Circle, Sarasota. Islander Photos: Courtesy AMI Paddlers of Paradise 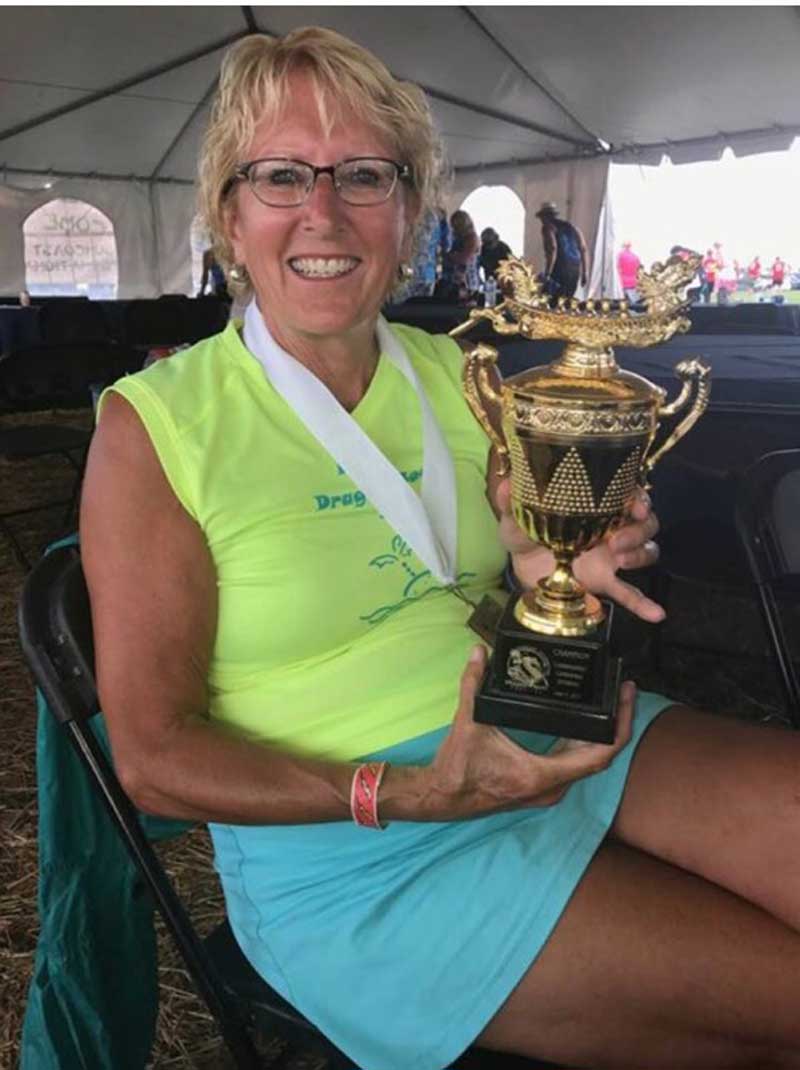 Melinda Bradway displays the trophy she and the Anna Maria Island Paddlers of Paradise won June 3 in the co-ed community boat division at the Suncoast International Dragon Boat Festival at Nathan Benderson Park in Sarasota.

After five games, Sato Real Estate is unbeaten and sitting atop the standings of the adult soccer league at the Center of Anna Maria Island.

Slim’s Place is in second on the heels of Sato with a 4-1 record, while Anna Maria CrossFit and Acqua Aveda follow with matching 3-2 records. Lancaster Design holds down fifth place at 2-3, while Ross Built and Mulock Flynn Law are tied for sixth at 1-4. Moss Builders is in search of its first victory.

Sato showed it is the team to beat during action June 8 as they rolled to a 14-2 victory over Ross Built behind four goals from Jake Parsons and three goals from Kevin Roman. Josh Sato and Chris Klotz added two goals each, while Chelsea Hoffner and the ageless Lyn Clark finished with a goal each in the blowout.

Chris Culhane notched the 2 goals for Ross Built in the loss.

The second game of the evening saw Acqua Aveda outscore Mulock Flynn Law by a 5-1 score. James Lynch and Ray Gardner led the way with two goals each, while Eric Pullen added a goal to the victory. Goalie Scott Rudacille helped preserve the victory with four saves.

Anna Maria CrossFit doubled up on Lancaster Design, earning a 4-2 victory behind a pair of goals from Angela Wiles. Camel Duzgun and BJ Grant added a goal each, while Brent Laudicina finished with four saves in goal.

Frank Agnelli and Andre Lewis led Lancaster with a goal each and Ben Sato finished with five saves in the loss.

Slim’s Place kept Moss Builders winless with a 5-3 victory in the final game of the evening. Yorvi Moreira had a pair of goals to lead Slim’s, which also received a goal each from Mike Kaleta, Nikki Kaleta and Aaron Parkin.

Campo General is owned and operated by former islander and entrepreneur Lance Bieker, who possesses a U.S. Soccer Federation D license and is the goal keeper trainer for the Manatee Magic.

In addition to having Lowe on board, Bieker will field a professional camp staff combining more than 50 years of coaching experience in high school, academy and competitive soccer. The camp will kick off June 19.

All Campo General training sessions will focus on the technical, tactical, physical and mental aspects of soccer, with the goal to increase individual and team performance. The daily training sessions consist of soccer fitness, Coerver skills training, including individual drills, soccer speed training and game simulation drills. Every session ends with a World Cup-style tournament.

For more information or to register, contact Bieker at 941-357-3112 or email lbieker@ccim.net.

The community center is accepting registrations for its adult basketball league, which will start June 27. Games will be played at 6:30 p.m. Tuesdays at the center, 407 Magnolia Ave., Anna Maria.

Cost is $5 for members and $90 for non-members. Players can sign up individually register a team until June 17.

Horseshoe action at the Anna Maria City Hall horseshoe pits was somewhat abbreviated as the Wednesday, Saturday champs were crowned after posting the only 3-0 pool play records.

Neil Hennessey walked his way to the title June 7 with the only unbeaten pool play record, while Jay Disbrow did the same thing during the June 10 games.

Play gets underway at 9 a.m. every Wednesday and Saturday at the Anna Maria City Hall pits. Warmups begin at 8:45 a.m.. followed by random team selection. There is no charge to play and everyone is welcome.