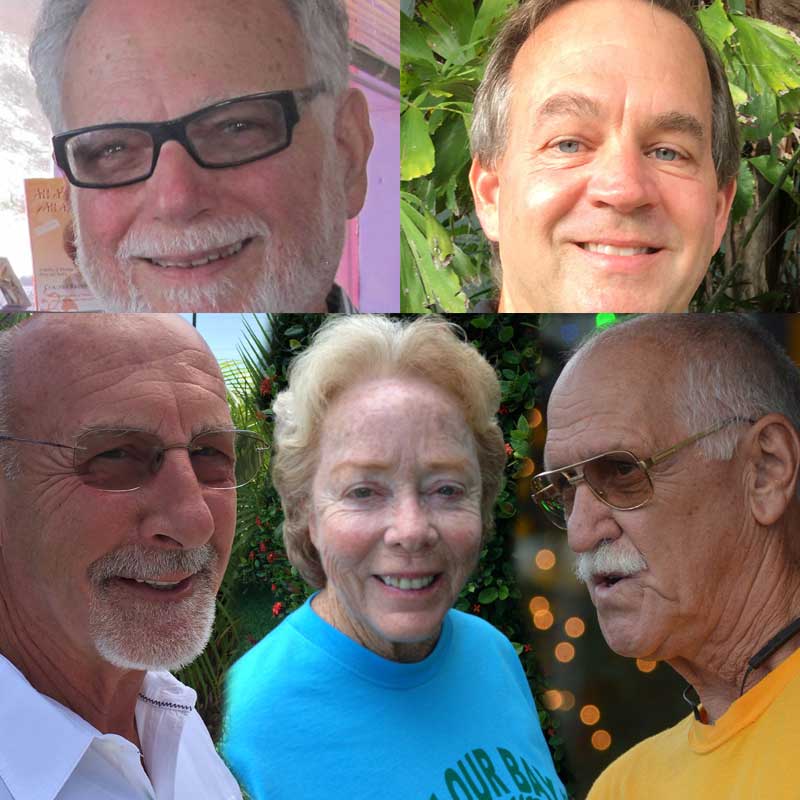 In the game of musical chairs, there’s one less seat than there are fannies to fill them.

It’s the same with the Holmes Beach election for city commissioner.

In Grossman’s five years in office, he’s become known as a consensus builder.

“I think we should be looking for common ground,” Grossman said.

His experience in office increases his value as a candidate, Grossman said.

“Well, it’s taken me a number of years to learn how to get things done that will positively affect our future, most of all to get some kind of consensus,” he said.

Dealing with the short-term rental boom in Holmes Beach is not just a business issue. Grossman said it’s driven some families from the community.

Vacationers sometimes party nonstop after arriving to Holmes Beach, which can disrupt residential neighbors to the point where they call the police.

Grossman said welcoming guests into the community is a better way of preventing disruption than becoming adversarial.

“First, we need to take a firm position on noise, traffic and parking,” he said. “But we need to take a positive stand, also. Welcome them to the island and somehow communicate we live in paradise and it’s a sane, low-key friendly place.”

Grossman also has crusaded for improvements to the city’s dog park in Holmes Beach at city field, 62nd and Flotilla Drive.

He’s been running hard ever since.

Hurst’s late burst includes an influx of funding. He’s raised $1,665 and spent $949, which are totals second in the race only to newcomer Jim Kihm.

If elected, Hurst said his focus will be on keeping Holmes Beach a place where people would rather own a home than a rental property.

A Holmes Beach resident since 2013, Hurst said he’s concerned by the erosion of community camaraderie and the loss of island events.

“That’s why I’m running,” he said. “I think I can help. I will work to restore a sense of community, a lot of which has been lost.”

Other platform planks include working to solve problems with short-term rental properties, he said, including the Bert Harris lawsuits where city liability now exceeds $28 million.

Hurst said he will “intelligently manage Bert Harris suits to eliminate the potential of tax increases or city bankruptcy.”

Home rule also is important to the first-time candidate.

“I will campaign against any state legislation that limits home rule and our ability to decide our own destiny,” Hurst wrote.

Hurst said the race represents a chance to make a difference for his family.

“I am raising a child on the island, which creates a strong motive to make this a great place to reside,” Hurst said.

Hurst said he stepped up to serve the city in order to make a difference by bringing a new perspective to the commission.

His four opponents in the race for four seats on the Holmes Beach City Commission have raised a combined $3,230.

Kihm also has an endorsement from departing Commissioner Jean Peelen in his pocket.

Whether or not those assets add up to deciding factors in the election remains to be seen for Kihm, who has been a fixture at Holmes Beach-related governmental meetings for more than four years.

The Logansport, Indiana, native said he brings a business background, sense of organization and planning skills should he be elected to office.

He said he wants to live in a cohesive community.

Kihm said he would concentrate on quality of life issues if elected, including working to direct more tourism tax dollars to Holmes Beach.

Other platform planks include maintaining and improving quality of life in Holmes Beach while exercising fiscal responsibility and demonstrating support for home rule.

“I’ve put together a campaign plan, did the mailings, got to absentee people and am knocking on doors to hear what they want in their city,” Kihm said. “I’d like to think I’d be a good candidate.”

Pat Morton
No one has more experience on the commission than Pat Morton.

Morton has been a commissioner since 2003, and re-elected six times to two-year terms.

He and his wife, Gailene, moved to Holmes Beach in 1994. They have two daughters, one grandson and one great-granddaughter.

Morton said he takes pride in his role as city commission liaison to Waste Pro, which is the vendor responsible for garbage removal in Holmes Beach.

The waste-removal issue became a hot button earlier in the year, too, when trash receptacles overflowed following the Memorial Day weekend. After consulting with Waste Pro, Morton reported the garbage issue had been resolved following the July Fourth holiday, which typically draws the largest crowds to Holmes Beach beaches.

There are few tasks he hasn’t taken on for Holmes Beach. From 2003-05, he was city liaison for the Center of Anna Maria Island, Anna Maria Chamber of Commerce and Keep Manatee Beautiful.

He is now liaison for the Island Emergency Operations Center, Waste Pro and emergency operations with the public works department.

“I’ve taken it seriously,” he said.

“I like to be in the know,” Soustek said. “A lot of information comes out of all these meetings.”

Soustek touted the commission’s role in the Holmes Beach budget-deficit recovery and said her term has been marked by the commission strengthening ordinances and playing a role in more firmly enforcing them.

“We may appear to be slow sometimes, but that’s because we’re going to get it right,” she said at the Oct. 13 Popcorn and Politics political rally at The Islander office.

Soustek’s political career on Holmes Beach began when she was appointed in 2013 to serve as chair on the Island Congestion Committee.

Soustek took office as a commissioner without being elected. On Nov. 25, 2014, she was selected by the city commission to fill the unexpired term of former Commissioner David Zaccagnino.

She was elected to a two-year term in November 2015.

Soustek attended Hillsborough Community College majoring in computers and accounting. She worked in the business communities of Tampa and Bradenton for 54 years before retiring in 2006.

Soustek’s civic involvement does not stop at the commission and going to related government meetings. She also is involved with Anna Maria Turtle Watch & Shorebird Monitoring, Save Anna Maria Inc. and Friends of the Island Library.

Issues she champions include a Longbar Pointe opposition group, home-rule petitioning and beach cleanup. Longbar Pointe, a development critics say will irreparably damage wetlands and mangroves, was approved by Oct. 3 by the Manatee County Commission.