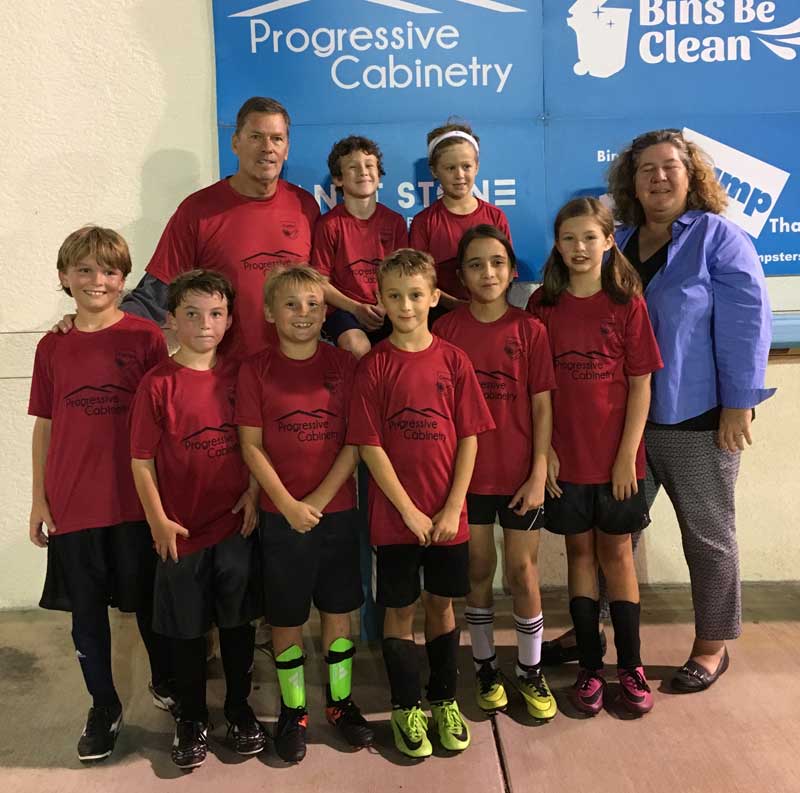 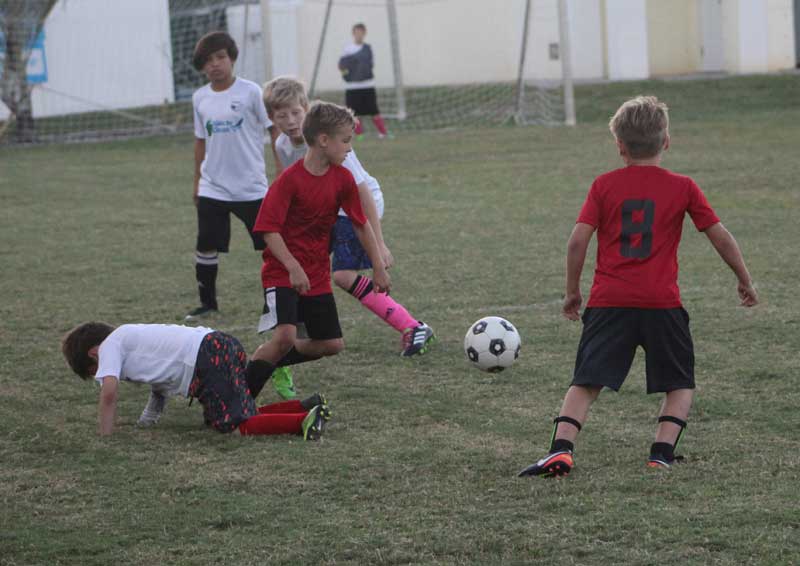 Jack Mattick, who scored all three Progressive Cabinetry goals, prepares to go to work on the Bins Be Clean defense during the 8-10 division championship soccer game Oct. 24 at the center. 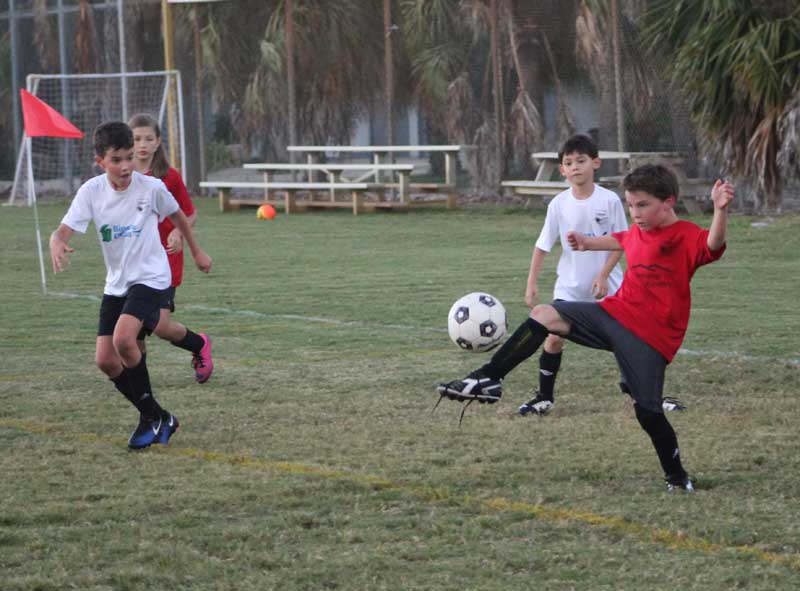 By halftime in the Oct. 24 championship soccer game at the Center of Anna Maria Island, Progressive Cabinetry looked to be living up to it’s No. 1 seeding in the 8-10 division matchup against Bins Be Clean, thanks to a pair of goals from Jack Mattick, the likely choice for the division MVP.

Mattick scored on a pair of breakaway goals in the second minute and the 13th minute to give Progressive a 2-0 halftime lead.

Early in the second half, Kieran Cloutier knocked a long clearing pass upfield, where it was fielded by Bins Be Clean central defender JM Feeney. Feeney looked to pass the ball out of his end, but Mattick picked his pocket and carried the ball in for an easy close-range goal and what looked like an insurmountable 3-0 lead.

Bins Be Clean had other ideas, however, and continued to push forward. Jackson Pakbaz got free up the left side in the 32nd minute, but Kieran Cloutier stifled that run with a solid tackle.

A minute later, Pakbaz fired a long-range shot that looked promising, but Progressive goalie Lily Kawahata made the save.

Bins Be Clean finally broke through in the 34th minute when Pakbaz stole the ball deep in Progressive territory, carried it in and beat Kawahata from close range to pull to 3-1.

Two minutes later, a Progressive defender inadvertently crossed the ball across his own goal mouth and Bins Be Clean player David Patterson pounced, hitting a nice shot, but Kawahata came up with the save.

With time winding down, Pakbaz carried the ball up the right side and hit a nice cross that resulted in a hand ball on a Progressive defender. Pakbaz deposited the ensuing penalty kick into the goal to pull to 3-2, but the final seconds ticked away, denying Bins Be Clean the hoped fo dramatic comeback.

Pakbaz scored both goals for Bins Be Clean, which received three saves in the loss from Andrew Patterson.

Wash Family Construction edged Blue Lagoon 4-3 to win the third-place game behind two goals and an assist from Riley Lawson and a goal and an assist from Lincoln Sauls. Chris Ueltschi added a goal, while Kendall Rice and Jack Whiteside combined on nine saves in the victory.

Frankie Coleman notched a hat trick to lead Blue Lagoon, which also received an assist from Caden Quimby and 7 saves from Victor Albrecht in the loss.

Slim’s Place holds onto first
Slim’s Place continues to lead the pack with a perfect 4-0 record at the halfway point in the adult soccer league at the center.

Mulock Flynn Law continues to nip at their heels with a 3-0-1 record, just ahead of 2-1-1 Sato Real Estate. Jiffy Lube and Acqua Aveda are both 2-2, while Ross Built and Moss Builders are 1-3. Mar/Kis Insurance is in last place — still in search of a victory.

Sato opened Oct. 26 action with a 7-6 victory over Moss Builders behind three goals and an assist from Josh Sato and two goals from Zoran Kolega. Nate Welch and Chesea Hoffner completed the Sato scoring with a goal each in the victory.

The second game of the evening saw Mulock Flynn Law ease past Acqua Aveda by a 6-4 score. Sean Flynn, Aaron Parkin and Chris Scott scored two goals each to lead Mulock in the victory.

Stephen Adair led Acqua Aveda with two goals and an assist in the loss, while Rico Beissert and Eric Pullen notched a goal each.

Jiffy Lube rolled to a 9-2 victory over Mar/Kis Insurance behind two goals each from Danny Anderson, Brad Laudicina and Eliza Faillace. Chris Klotz, Mike Brusso and Chris Culhane completed the scoring with a goal each in the win.

Matt Kretzman had 4 goals and an assist to lead Slim’s Place to an 8-4 victory over Ross Built in the final game of the evening. Kris Yavalar added twp goals, while Damir Glavan and Greg DeMeuse had a goal each in the victory.

Kevin Roman led Ross Built with three goals and an assist and Greg Ross scored once in the loss.

Hennessey. The finals saw Livedoti and Palmer roll to a 23-7 victory over Disbrow and Langeland.

The Oct. 28 games saw two teams advance to the knockout stage. Livedoti earned his fourth consecutive victory, this time teaming with Steve Doyle to earn a trip to the winner’s circle with a 23-7 victory over Tom Skoloda and Hennessey.

Warmups begin at 8:45 a.m. followed by random team selection every Wednesday and Saturday at the Anna Maria City Hall pits.

Prospects are required to attend player evaluations followed by a draft.

Games will be played Tuesday and Wednesday evenings and some Saturdays.

The center also is recruiting coaches and sponsors.