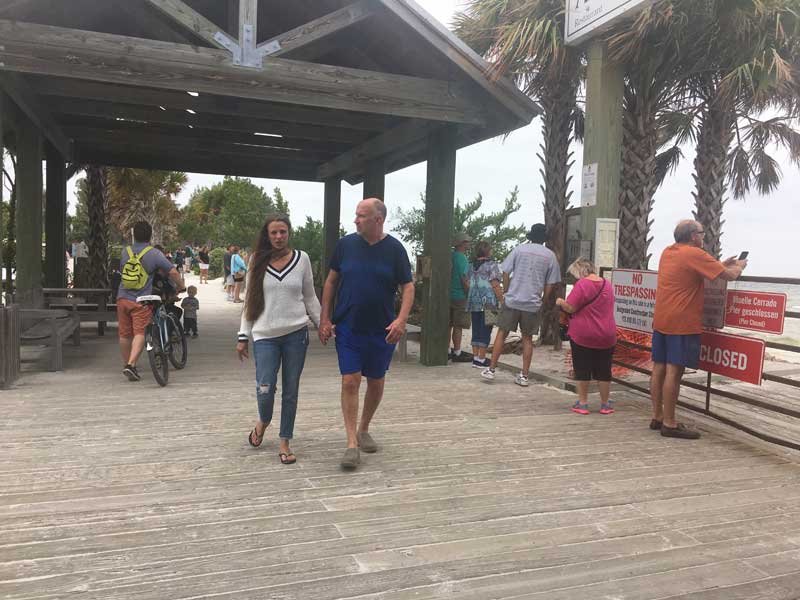 Visitors to the Anna Maria City Pier Nov. 10 peer over the gate that prohibits entry. The pier has been closed since Hurricane Irma passed over Sept. 10-11 and caused damage to the bait shop and decking. There are 1,000 engraved planks on the damaged pier. Islander Photo: Bianca Benedí

Emails to the city of Anna Maria contain a plethora of suggestions for re-purposing or salvaging the engraved Anna Maria City Pier planks when the pier is rebuilt.

Ayres Associates, the engineering firm hired to rebuild the pier, estimated it will take 62-82 weeks to repair and rebuild the structure.

Hurricane Irma’s passage Sept. 10-11 left the pier “totally destroyed,” according to the terms of the city’s lease with Mario Schoenfelder, which defines total destruction as damage that takes more than 120 days to repair.

However, the city has maintained the pier was in poor shape even before the hurricane.

A 2015 marine survey that found the pier in need of repair sent the city searching for repair bids before Hurricane Irma hit.

In a proposal Oct. 19, Ayres suggested using concrete pilings and lumberock — a mineral-plastic composite — planks to rebuild the pier and give it a 100-year lifespan. Commissioners voted to preserve the pier as long as possible.

One question dominated the conversation: What will the city do with the existing planks?

People have proposed all sorts of ways to reuse the sponsor planks, engraved and installed as part of the pier’s 100-year anniversary celebration in 2010 in a partnership between the pier tenant, the City Pier Restaurant, and The Islander.

Not all people are interested in saving their planks — one email from a plank owner sent to the city of Anna Maria says the engraving was dedicated to a now-failed relationship and the owner’s plank could be destroyed without heartache.

But the vast majority of writers asked for their planks to be reused or returned.

“We hope that the planks will be used in some way at least that we can still see them,” wrote Bradenton residents Carol and Gerry Verrechia Oct. 27 in an email.

Douglas Terry, president of a once active group known as the Pier Regulars, asked Murphy to consider park benches, which he suggested would be helpful to old-timers walking the pier.

An email signed by the Callen family asks the city to keep a plank made in honor of their parents. Jim Callen was one of the founders of an early Anna Maria Turtle Watch organization. “My parents are no longer with us and we would like to keep this memory,” the email reads.

Rick Karcher, an architect in Pennsylvania, recommended re-purposing the planks for wall or ceiling coverage in the pier restaurant.

The city has been searching for solutions to retain the planks. Mayor Dan Murphy appealed to commissioners Nov. 9, asking them to authorize his search for alternatives to destroying the planks.

Murphy said one cost-estimate for salvaging the planks — de-nailing, power cleaning and storing — came in at more than $50,000.

Commissioners approved his request and asked Murphy to look into costs for saving just the planks that people want.

Commissioner Dale Woodland, who serves as liaison to the Anna Maria City Pier, asked Murphy to reconsider using concrete pilings in the rebuild. He suggested the city use wood pilings wrapped in vinyl.

Estimates for construction are about $5 million, which Murphy hopes to cover through a combination of funding from the Federal Emergency Management Agency, the Manatee County Tourist Development Council, state funds and the beach concession fund, a pool of money that comes from concessions sold at Manatee Beach.

However, Murphy said specifics should wait until a December meeting with Ayres Associates.

“Everywhere I go, people have input,” Woodland said Nov. 24. The pier has “been there over 100 years,” he said. “It’s a special, special place. We need to make sure with such an important undertaking, we get this right.”

Woodland said the more input people provide on the pier, whether they’re locals who see it daily or experts who have recommendations, the better the end result will be.

Woodland said he is encouraging people to attend the meeting with Ayres Associates, which will be 10 a.m. Wednesday, Dec. 6, at city hall, 10005 Gulf Drive.

“When (the pier) is done, it’s going to be something the whole community is proud of,” Woodland said.