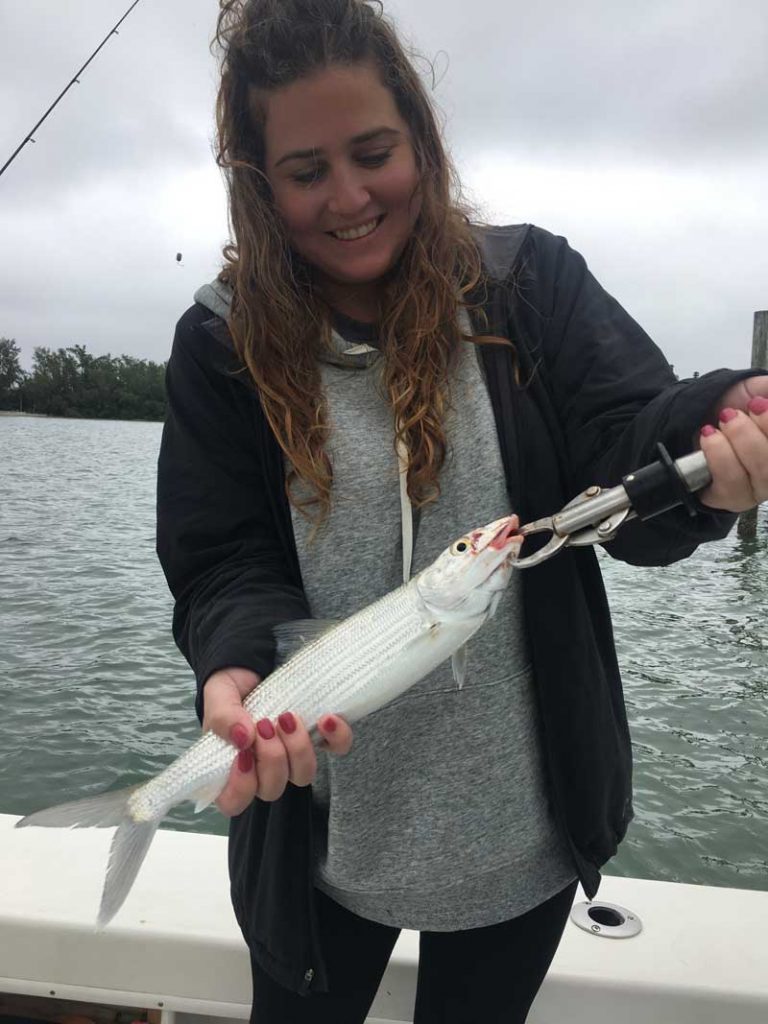 Sarah Hutchison, visiting Anna Maria Island from Rogers, Arkansas, didn’t need to take her vacation in the Florida Keys or the Bahamas to hook up a fighting bonefish. She found her catch in Sarasota Bay on a charter fishing trip with Capt. Danny Stasny of Southernaire Fishing. Islander Courtesy Photo 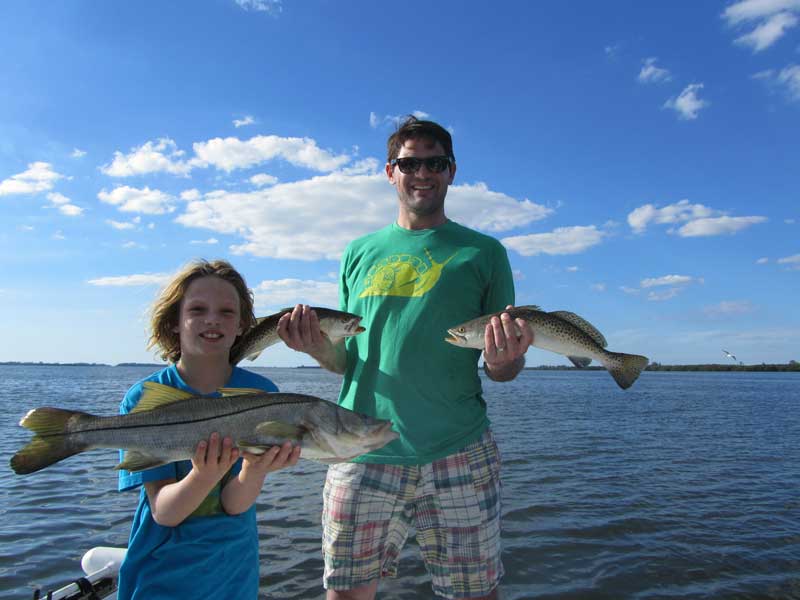 Donnie and Don Sisson, a father and son fishing team from Colorado, show off their Nov. 17 inshore catch of spotted seatrout and snook, hooked in Sarasota Bay using shiners for bait. They were guided to the fish by Capt. Warren Girle, who reminds anglers the current season for snook winds up this month.

Fishing around Anna Maria Island is “all over the charts.”

Fishing warm, mild days before cold fronts is proving to be on the exceptional side, while fishing during and shortly after the fronts is yielding mediocre catches — and discouraged anglers.

Snook action is occurring when the sun shines bright and warms things up and the tides are moving swiftly. On my Southernaire charters, we had some days of 40-plus snook to the boat in less than an hour and a half. Even the redfish couldn’t resist hitting a free-lined shiner on those days.

Venturing out to the reefs on calm days has proved prosperous for kingfish and Spanish mackerel. Numerous kings in the 36-inch range were nothing short of hectic on the backwater spinning gear we were using. An ample supply of shiners in the bait well was critical to keep chumming up interest among the kings.

On mornings where the temperature was 55 degrees and the wind was blowing 20 mph, the fishing can be a “reality check” at best. I catch myself saying, “You’re not as good as you thought you were” on those days. Still, I am managing to scrape up some redfish from under the docks by using live shrimp on a knocker rig. Spotted seatrout are staying somewhat clumsy around my hooks on those cooler days, although the tide has been moving pretty good for them to commit.

Capt. Warren Girle is targeting a variety of backwater species in Sarasota Bay. Snook, redfish and spotted seatrout are at the top of his list, while jack crevalle, ladyfish and blue fish also are coming to the hook. Live shiners or pinfish as bait are preferred, although Berkley Gulp shrimp on a jighead is yielding results.

Capt. Aaron Lowman is working in Tampa Bay south to Sarasota Bay. He’s finding spotted seatrout are the most prevalent species, while snook and redfish also are present. Spanish mackerel, bluefish and jack crevalle are mixed in when fishing deeper grass flats. Live shiners as bait are working for his clients, although live shrimp are attracting a redfish bite when dock fishing.

Gag grouper are another species popular on Lowman’s boat this past week. Trolling around structure is producing keeper-sized fish.

Capt. Jason Stock is running charters offshore when the winds are calm from the east. In the 4-mile range, Stock is targeting Spanish mackerel and kingfish. Live, free-lined shiners are attracting the attention of macks, as well as — surprise — tarpon. Not bad for mackerel fishing, huh? Other fish being caught out there include tripletail and hogfish.

In the bay, Stock is managing to put clients on some respectable-sized gag grouper.

Capt. David White of Anna Maria Charters is fishing nearshore structure with good results. By trolling Rapala XRAPS over reefs and wrecks, White’s clients are hooking into some nice gag grouper. According to White, live pinfish are attracting gags while at anchor. Free-lining these “pinnies” down to the bottom is certain death for the unsuspecting bait. Hefty mangrove snapper also are being caught on the live pinfish. When using shiners as bait on the flats, White is finding slot-size snook on the end of his line. Numerous schooley-sized fish are being caught, too.

Jim Malfese at the Rod & Reel Pier is seeing the arrival of many of the usual suspects, bottom-dwelling species — and I’m not taking about the fishers. Flounder, black drum and redfish are being caught by anglers using live shrimp as bait. A weighted rig consisting of an egg sinker, a swivel, some leader and a hook is ideal to anchor a feisty little shrimp on the sandy bottom, precisely where it’s convenient for a hungry bottom fish. Shrimp fishers may also encounter sheepshead, small snook, juvenile grouper and bait-stealing pinfish.