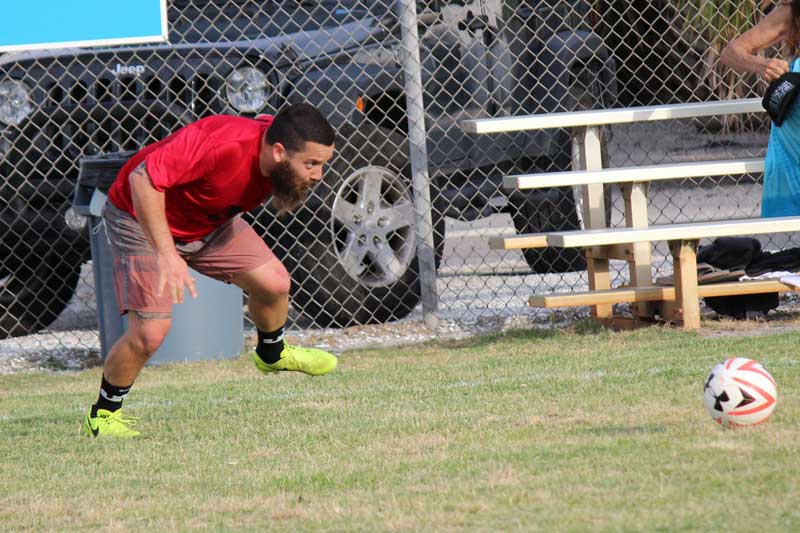 Legler & Flynn Law player Diego Felipe has his eye on the ball during May 10 adult soccer action at the Center of Anna Maria Island. Islander Photos: Courtesy Erin Felipe 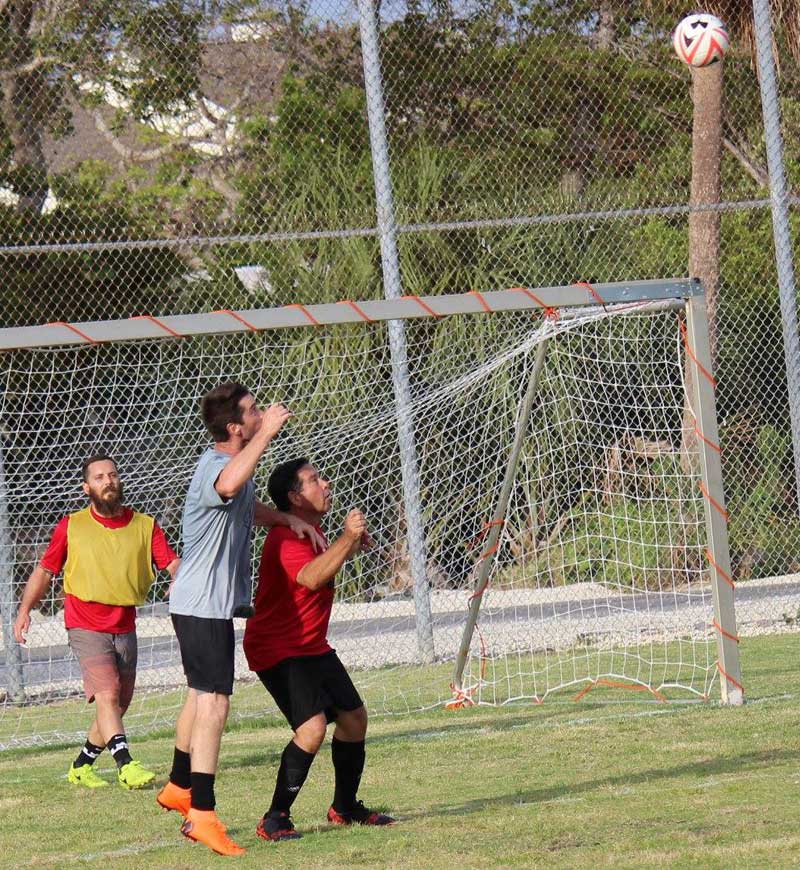 Ross Built’s Ryan Hogan and Legler & Flynn defender Steve Vellequette battle for position as the ball comes in during May 10 adult soccer action at the Center of Anna Maria Island.

Soccer rules, as the saying goes on Anna Maria Island, meaning it’s No. 1.

With only two weeks of action remaining in the adult soccer league at the Center of Anna Maria Island, Legler & Flynn Law is 6-0 and alone in first place. Lancaster Design is on L&F’s heels though, sporting a 5-1 record. Slim’s Place follows with a 3-1-2 record in third place. Sato Real Estate is at 3-3. Ross Built, Moss Builders, Mar/Kis Insurance and Acqua Aveda follow in the standings in order.

Legler & Flynn opened May 10 action with a 5-2 victory over Ross Built behind two goals apiece from Diego Felipe and Chris LeClainche. Shay Coleman added a goal, while Steve Oelfke and Felipe combined on seven saves in goal.

Ross Built was led by a goal and an assist from Ryan Hogan and a goal from Chris Culhane. Chris Klotz added an assist and Robb Marshall made six saves in the loss.

Mar/Kis Insurance edged Sato Real Estate 3-2 in the second game of the evening behind a goal and an assist from Tony Morales and a goal each from Joel Sanchez and Manoj Kumar Poudel. Mario Prino helped preserve the victory with five saves between the pipes.

Eliza Faillace scored twice to lead Sato Real Estate, which also received an assist in the loss from Josh Sato and four saves from Jordan Demers.

Jessica Williams notched the lone goal for Moss Builders on an assist from Chris Scott, while Josh Bernet made three saves in the loss.

Slim’s Place outscored Acqua Aveda 5-4 to close out the May 10 action behind a hat trick from Rico Beissert and a goal each from PJ Smargisso and Nate Welch. Andre Lewis had an assist and Smargisso made seven saves in the victory.

Jake Parsons scored three goals in the loss and Shea Yates added a goal.
1 week remains for youth soccer
With only one game remaining in the spring schedule, the standings in the youth soccer league at the Center of Anna Maria Island are tight. Bins Be Clean is alone in first place with a 3-1-1 record, but Progressive Cabinetry and Signarama are on their heels with matching 2-1-2 records. Planet Stone isn’t far behind with a 2-2-1 record, while Salty Printing is locked in last place, still in search of a win.

Action on May 12 kicked off with Planet Stone slipping past Signarama by a 1-0 score. Riley Lawson notched the lone goal for Planet Stone, while Beckham Factor made five saves to help preserve the victory.

Kendall Rice made a save for Signarama in the loss.

The second game of the day saw Bins Be Clean earn a 3-1 victory over Salty Printing behind a hat trick from Jackson Pakbaz and five saves from Victor Albrecht.

Jack Mattick scored the lone goal for Salty Printing, which also received three saves in the loss from Jack McCarthy.

The last game of the day saw Signarama and Progressive Cabinetry battle to a 1-1 tie.

Key Royale news
Golf action at the Key Royale Club teed off with the men playing their regular nine-hole, modified-Stableford system match May 7. Hoyt Miller earned clubhouse bragging rights after carding a score of plus-5 to edge second-place finisher Dave Richardson by a point.

The women took to the course May 8 for a nine-hole, individual-low-net match in four flights.

Phyllis Roe grabbed the top spot in Flight A with a 1-under-par 31, one shot better than Debi Wohlers. Pam Lowry fired a 1-over-par 33 to finish in third place.

Pam Alvord’s even-par 32 gave her first place in Flight B by one stroke over second-place finisher Sue Christenson.

The men were back on the course May 10 for a nine-hole scramble. The team of Chuck Patrick, Mark Schlenker and Larry Solberg combined on an 8-under-par 24 to earn clubhouse bragging rights for the day. The team of Gerry Dahl, Jon Holcomb, Bob O’Keefe and Ron Vandeman came in second with a 5-under-par 27.

Horseshoe news
Horseshoe action at the Anna Maria City Hall horseshoe pits was short and sweet this past week, as both champs were outright winners.

May 9 action saw the team of Steve Doyle and Neil Hennessey post the lone 3-0 pool-play record to win the day’s proceedings.

Bob Heiger and Rod Bussey matched that feat and were champs for the May 12 horseshoe action.