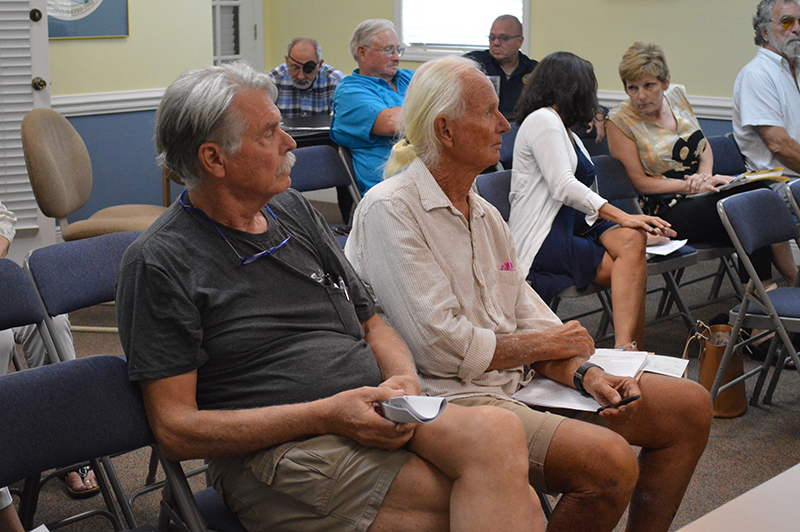 The Bradenton Beach City Commission took action June 21 to block four citizen-initiated charter amendments, setting up what will likely amount to another battle at the courthouse.

At their June 21 meeting, the mayor and commissioners determined placing four charter amendments put forth by the political action committee Keep Our Residential Neighborhoods for the Nov. 6 ballot would violate the charter, siting alleged insufficiencies with the petitions and contradictions with state statutes.

John Metz said June 24 that he and Mapes are consulting with their lawyer on the city’s decision to ignore the citizen’s petitions and block KORN’s amendments from going to the supervisor of elections for the Nov. 6 ballot. He said they would “seek a special election if the judicial delay pushes us past the ballot printing time.”

According to Reed Mapes and John Metz, who launched KORN and collected signatures in support of the ballot questions, they followed State Statute 166.031, which provides for citizen-initiated charter amendments, superseding the city charter.

Signatures on more than 80 petitions for the four amendments were submitted. The number required is 10 percent of electors in the most recent city election, November 2017, which was 744.

Metz and Mapes attended the city’s June 21 meeting to speak in support of their initiatives and persuade commissioners to approve delivery of the petitions to the Manatee County Supervisor of Elections Office, per the city charter and state statutes.

In a June 11 letter to Metz, city clerk Terri Sanclemente wrote that according to the charter, KORN needs at least five members — Mapes and Metz are the only members listed — and the petition forms lack affidavits indicating the petition was signed in the presence of a committee member.

Sanclemente included the signed petitions with the letter, but Metz declined to accept them.

According to the city charter, Metz and Mapes had 10 days to correct the insufficiencies and refile the petitions with the city clerk.

KORN declined, instead asking the matter be discussed by the commission at a meeting.

Metz said KORN used the same referendum process as last year, when he was part of the group Concerned Neighbors of Bradenton Beach, which, after a similar struggle with city hall, achieved three amendments on the ballot, all approved by electors.

Commissioner Ralph Cole asked Metz June 21 if KORN followed the procedure in the city charter to gather signatures and file the amendments.

Metz replied, “No.” He said it “wasn’t appropriate” since they based the petitions on the state statute, adding that the city was required by law to pass the petitions to the SOE, not scrutinize them.

City attorney Ricinda Perry said statute 166.031 works in tandem with statute 101.161, which states the amendment language must be “clear and unambiguous.”

She told the commission that KORN’s petitions use leading language not included in an ordinance or resolution.

Commissioner Randy White said the petitions should go to the SOE “and let them figure it out.” He said KORN is seeking “direct democracy” with the initiatives and the city is trying to “tie them up.”

“If the amendments aren’t on the ballot, at least 10 percent of voters are going to wonder where it is,” he said.

Mayor John Chappie said the commission would need to decide whether the charter applies.

Commissioner Jake Spooner said, “We are stuck in a position where we either violate the charter, or put this on the ballot.”

Perry said it is the responsibility of the city commission to uphold the city charter and state laws, so they would need to decide how that applies in this matter.

“This is your opportunity to protect the city from petitions that come in that don’t follow the law,” Perry said.

Cole made a motion to reject the four proposed amendments for insufficiencies.

A second motion made by Cole stated the four initiatives presented by KORN do not comply with Florida statutes 101.161 and 166.031.

“I find it very difficult to understand how my elected officials would hinder the process of citizen-signed petitions,” Shearon said. “This should go before the voters to let the voters decide.”

Earlier the same day, the Charter Review Commission met to review the proposed amendments for consistency with the charter. The members had mixed reviews for the four KORN amendments.

KORN’s ballot questions seek to amend the city charter by asking voters to prohibit the construction of a multilevel parking garage in the city; require city commission vacancies be filled by election; prevent construction within setbacks; and require a certified public manager to serve as chief executive officer.