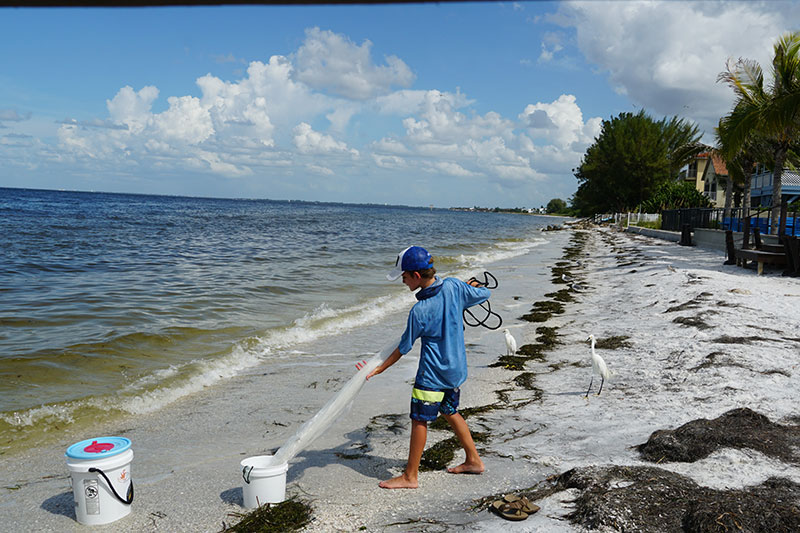 The city of Anna Maria went to war against red tide with the help of some Cortez fishers and Manatee County.

And, if a clean shoreline as of Aug. 31 was any indication, the city appeared to be winning its first battle with the harmful algal bloom.

“If you go down there now,” Mayor Dan Murphy said Aug. 31, the beaches are “completely clean.”

With the county’s help, the city disposed of 16 tons of red tide debris as of Aug. 31, Jones said.

Mostly on the bayside — from La Vista Inlet to south of the city pier pavilion — the fishers used pitch forks to load dead fish and seagrass and hauled it in their boats. The fishers then took the debris in wheel barrels to dumpsters waiting on shore.

Murphy said the winds shifted at the beginning of the week, sending dead fish to the bay shore “really entangled in seaweed.”

Jones also had kudos for county workers, including Mark Taylor and Carmine DeMilio, who raked the Gulf-side beaches clean with a tractor. He called Taylor “superman.”

The county switched gears with its red tide cleanup Aug. 27.

Ten days into an effort with Aptim, a debris removal company based in Texas, county administrator Ed Hunzeker announced a nets-to-neighbors campaign.

Aptim had been hired to provide four vessels and crews under a not-to-exceed $469,000 contract and, according to county spokesman Nick Azzara, $150,000 is expected to be paid for the work.

“The contractor was hired to remove large masses of floating fish in residential canals and boat-accessible shorelines,” Azzara wrote in an Aug. 30 email, adding Aptim “had worked through the areas with the heaviest red tide debris, mostly in Coral Shores, Bowlees Creek and Trailer Estates” when the county decided the contractor’s approach was not cost-effective.

The Aptim contract also caused fury among Cortez fishers, who believed the county should have employed the out-of-work locals.

As far as the county’s nets-to-neighbors campaign — with the parks department volunteer coordinator Melissa Nell working with residents and neighborhood associations, supplying buckets, nets and dumpsters to collect the dead fish — the county hasn’t seen any takers in Cortez or Anna Maria Island.

All told for Manatee County, more than 260 tons of red tide debris was collected, Nell said.

Funding for the cleanup efforts will come from a $750,000 Florida Department of Environmental Protection grant to Manatee County announced Aug. 22 by Gov. Rick Scott, according to Azzara.

For more information on nets-to-neighbors or other red tide questions, go to manateecounty.org or call the county hotline 9 a.m.-5 p.m. Monday-Friday at 941-749-3547.