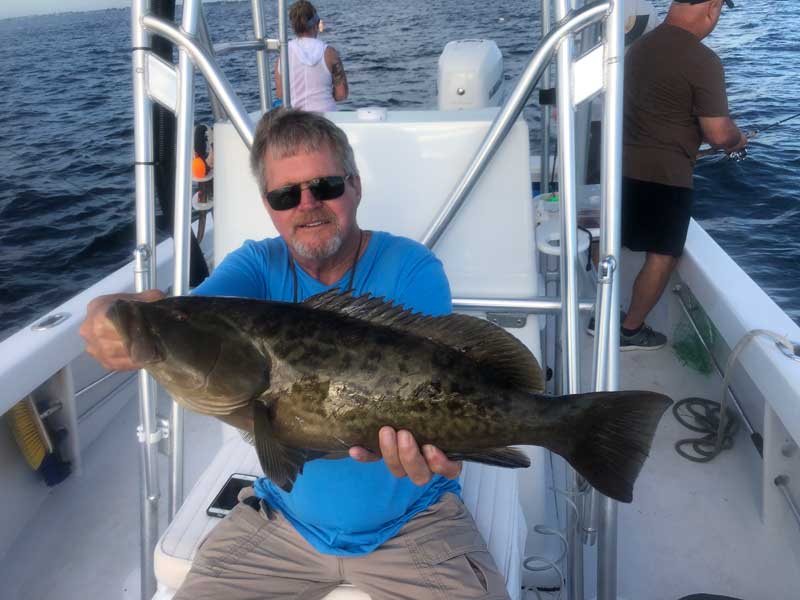 Mel Wood, visiting Anna Maria Island from Ironton, Ohio, shows off a keeper gag grouper caught Sept. 13 in 13 feet of water on a live pilchard while on a guided fishing trip with Capt. David White of Anna Maria Charters.

Fishing around Anna Maria Island is proving to be good as long as the red tide stays offshore.

Fishing in Tampa Bay and the adjacent waters north and east of Anna Maria is producing good action on a number of inshore species.

There’s plenty of action for sport and dinner fishers.

It’s a question of knowing where to go — and a guide is the best bet to finding a great catch.

Spanish mackerel and mangrove snapper seem to be the most abundant locally, especially around reefs and wrecks. Free-lining small live shiners is producing this bite.

Catch-and-release snook and redfish are proving good for sport fishers around mangrove edges and oyster bars. Again, free-lined shiners are the bait of choice.

Meanwhile, decent numbers of spotted seatrout are being caught on the deeper grass flats of Tampa Bay. Using a popping cork combined with a live shiner is deadly for these fish. And they’re great in the frying pan.

Now, for a move offshore. Traveling into the Gulf of Mexico is a little risky due to the numerous patches of red tide present. But for those willing to make the run to deeper, clean water, there are rewards and some great catches. The guides are reporting cobia, permit, snapper and grouper are being caught. Just be prepared to burn some gas, as some days require runs up to 18 miles offshore to find good water.

Capt. Aaron Lowman is working his magic around the ledges and natural hard bottom in the Gulf of Mexico. Although red tide exists in some offshore areas, Lowman says he’s managing to find areas of clean water, where he’s putting clients on mangrove snapper, hogfish, grouper and porgies and the anglers are putting plenty of fish in the cooler.

Inshore fishing is producing action north of Anna Maria Island, where the yield is Spanish mackerel, spotted seatrout and mangrove snapper. Catch-and-release snook and redfish also are coming to the hook for Lowman’s anglers.

Capt. David White of Anna Maria Charters is targeting catch-and-release snook and redfish in southern Tampa Bay with his clients. Casting live shiners in areas where mangrove edges and oyster bars exist is producing good action on these fish. Fishing deeper water in Tampa Bay around structure also is a good bet. Mangrove snapper and macks are present in these areas and White reports they are on the feed.

Capt. Jason Stock is venturing out into the Gulf of Mexico in search of clean water. On some days, he’s running as far as 18 miles offshore to reach good fishing grounds. Once there, Stock is putting clients on numerous permit from 10-30 pounds. Yellowtail and mangrove snapper also are being caught, as well as some large cobia.

Moving inshore, schooling catch-and-release redfish are providing action and some large trout are being caught on extreme high tides.

Jim Malfese at the Rod & Reel Pier says fishing is day to day at the north end, where the red tide shows up one day and leaves just as quickly. He says pier fishers are hooking up with a variety of species. Those using live shrimp as bait are catching numerous black drum and catch-and-release redfish. Mangrove snapper and a few flounder also are in the mix. Catch-and-release snook are another species taking refuge around the pier in southern Tampa Bay. Lastly, Spanish mackerel are being caught by fishers using silver spoons.