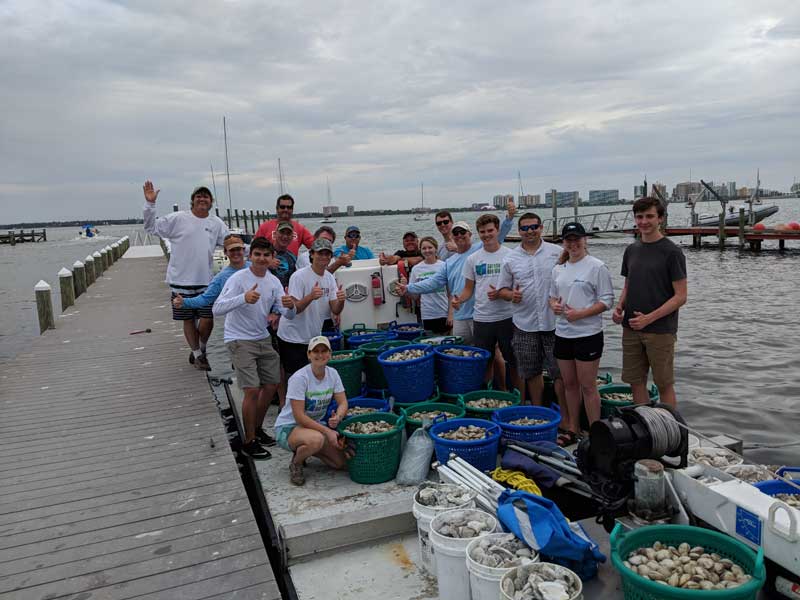 Sarasota Bay Watch volunteers prepare Nov. 17 to distribute clams in the bay in an effort to reduce red tide. Clams have been shown to filter the red tide toxin. The group loaded and left from the Sarasota Sailing Squadron on City Island at the south end of Longboat Key. Islander Courtesy Photo

The red tide bloom affecting Anna Maria Island since August reared up on the Gulf Coast more than a year ago.

The patches of stench from dead fish and the harsh affects for anyone with respiratory issues bounce from one area to another.

It’s often hard to say where or if the impacts will be observed from day to day.

But, since October 2017, residents and businesses on the southwest Florida coastline have been living with Karenia brevis, red tide, and watching it kill.

The impacts have been difficult for those dealing with wildlife and those tied to the bottom line. As the levels of red tide bounce up and down weekly, is there an end in sight?

Wayne Guenther is a local charter boat captain. He remembers the red tide of 2004-05 and the damage it created it the waters offshore of Longboat Key.

“It was a dead zone. I remember diving there and there was nothing left alive,” Guenther told The Island er Nov. 10.

Guenther works part time as a boat captain on Anna Maria Island, and lives abroad the remainder of year.

Currently at his home in Spain, he is debating about returning for the winter season, usually his best money-making period.

“I’m just not sure if it’s worth it,” Guenther said. “I really had hoped the red tide might be gone by now.”

Charlie Hunsicker, the director of Manatee County Parks and Natural Resources, has been on the front lines of the red tide battle and, like others, is growing weary from the skirmishes.

Hunsicker said Manatee County has deployed both short- and long-term measures to mitigate red tide impacts but, severe damage has occurred in some areas.

Hunsicker said in a phone interview Nov. 21 it could take years for the near-shore reefs to recover after suffering from lack of oxygen for so long. But that’s not to say that offshore reefs aren’t thriving.

Living shorelines have been created and oyster-bed restoration continues.

“There are fish are out there, they have just moved out of the red tide,” Hunsicker said. “What we’ve already done with our living shorelines and in the bay will definitely help in the long run.”

Locals agree. But the impact continues on sport fishers, as well as commercial fishers.

Scientists agree that shellfish in areas with red tide should not be harvested or eaten.

Sarasota Bay Watch is calling for volunteers to assist in placing more clams Saturday, Dec. 1. Landside and topside help is needed, as well as boats and divers to assist with distribution. Go to sarasotabaywatch.org for more information.

Melissa and Frank Williams said they dined at the Waterline Marina Resort and Beach Club on Marina Drive in Holmes Beach on Thanksgiving Day, and reported the smell of dead fish in Anna Maria Sound and the canal at the resort was prominent.

“I shut my windows this morning,” Melissa Williams said Nov. 23 by phone from her home on Spring Lake in Holmes Beach. “I suspect it’s in our lake.”

She reported dead fish floating — and stinking — in the canal waters along Marina and Palm drives.

Residents, businesses and visitors are still dealing with red tide, still seeking relief many months after its arrival to Anna Maria Island Aug. 3.

The run of red tide is stretching into a marathon.