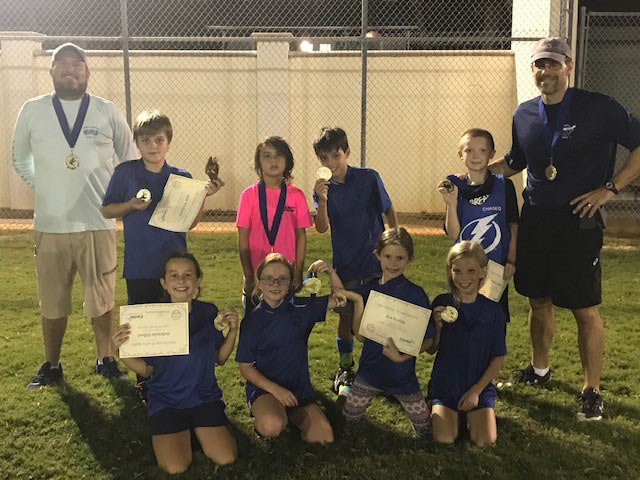 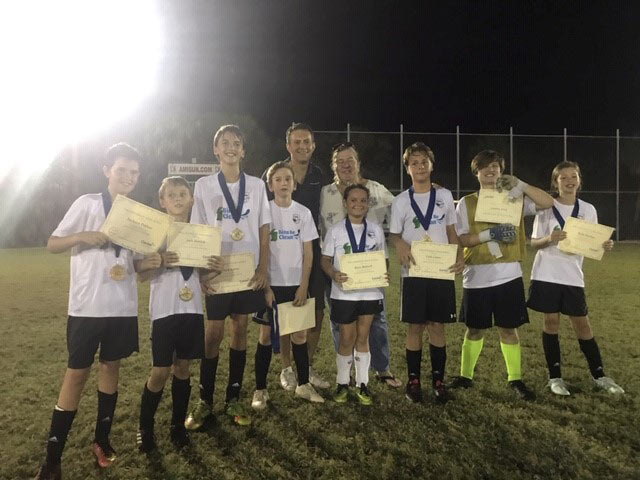 The youth soccer league at the Center of Anna Maria Island came to an end Nov. 14 with championship night and the awarding of accolades to some deserving players.

The 8-10 division saw Ugly Grouper advance to the championship match on the strength of a tight, 2-1 victory over Progressive Cabinetry. However, the finals went as expected as top-seeded Planet Stone held on for a 3-2 victory.

The division MVP went to Maximus Manapat and Savannah Coba, female MVP. Defensive MVP was awarded to Jack Whiteside, while Julia Baugher captured the most improved award. Last, but not least, Cale Rudacille was named the Goalie of the Year.

There were no major surprises in the 11-13 division playoffs as Wash Family Construction advanced to the title game with a 3-0 victory over Slim’s Place before dropping a 3-0 decision to No. 1 Bins Be Clean.

MVPs for the 11-13 division went to Cash Carter and Angelina Albrecht. Kieran Cloutier captured the defensive MVP, Caden Quimby was named most improved and Evan Talucci was named Goalie of the Year.

Congratulations to all the players, coaches and parents for another fantastic season of recreational soccer.

Adult soccer rolls into 5th week
The adult soccer league at the center competed in four matches Nov. 15 in its fifth week of action.

The action got started Nov. 15 with Moss Builders rolling to an 8-3 victory over AMI Locals.

Sato showed why it’s in first place with a convincing 5-1 victory over Slim’s Place in the second match of the evening.

Ross Built and Lancaster Design battled to an 8-8 tie in the night’s third match.

First place went to the team of Amy and Alan Tripp and Peggi and Herb Clauhs with a score of 22.7.

Fred Miller won the closest-to-the-pin prize on the third hole, while Karen Mitchell captured the proximity title on the eighth hole. Barb Harold and Mike Morris won the straightest-drive contests.

The men played their regular modified-Stableford system match Nov. 12, with Gary Alvord, Buddy Foy, Keith Offenhaver and Bill Shuman taking the team competition on a plus-7.

Art McMillan captured individual honors with a score of plus-5.

In a nine-hole scramble Nov. 15, Al Carr, Jon Holcomb, Larry Pippel and Tom Solosky combined on a 3-under-par 29 to grab team bragging rights for the day.

Horseshoe news
Horseshoe action last week at the City of Anna Maria horseshoe pits was short and sweet with both the Nov. 14 games and the Nov. 17 games producing outright winners.

Action Nov. 14 saw the team of Sam Samuels and Tom Skoloda post the lone 3-0 record, while the team of Dom Livedoti and Tim Sofran did the same in the Nov. 17 games.

Center registering for football
The Center of Anna Maria Island is registering kids for this winter’s youth football season.

The league is open to children ages 5-17.

The cost to register is $10 for members and $126 for nonmembers.

The registration deadline is Monday, Nov. 26.

There will be no evaluations for children ages 5-7.

Games will be played Tuesdays.

For more information, contact recreation director Will Schenerlein at will@centerami.org or 941-778-1908.

The center is at 407 Magnolia Ave., Anna Maria.