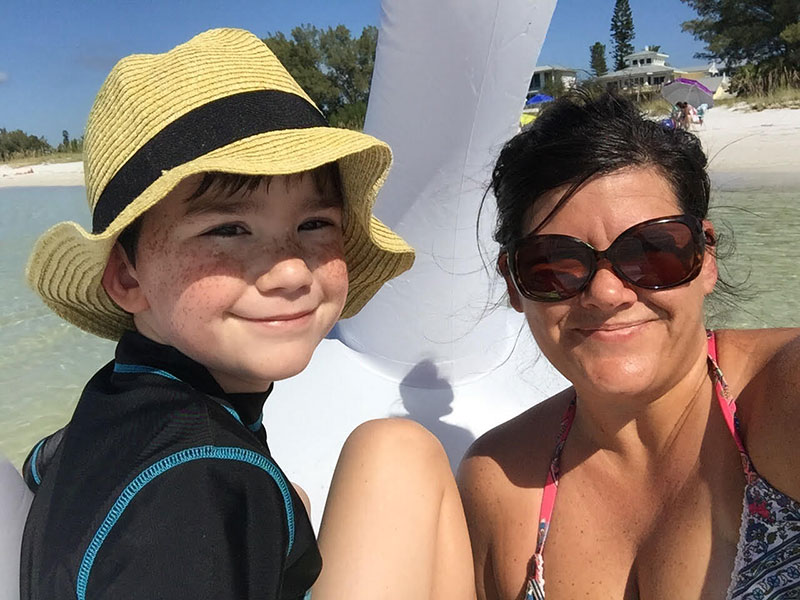 Brennan Saletta, left, 7, and mom Tara Myers take a photo on their swan raft while in the Gulf waters near Spring Avenue in Anna Maria, before they floated a mile from shore. Islander Courtesy Photo 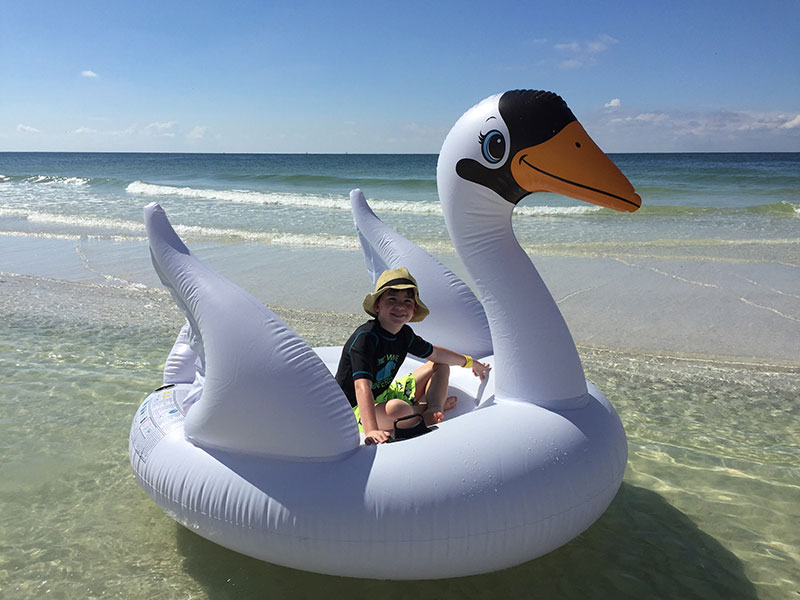 Brennan Saletta, 7, sits on an inflatable swan Oct. 21 before the raft carried he and his mom a mile from the shore in the Gulf current. They were rescued by a crew from WMFR on the district’s boat. Islander Photo: Courtesy Tara Myers

“I want people to know it’s not a beach float.”

Tara Myers of Bradenton had a few words of wisdom for anyone considering taking floatation devices meant for use in shallow water and swimming pools into the Gulf of Mexico.

Her plea comes after she and her son, Brennan Saletta, 7, were lounging and paddling along the shoreline in the Gulf of Mexico on an inflatable Mega Swan Oct. 21 when they were pulled a mile offshore by strong currents.

Rogue currents that flow seaward near the shore in breaking waves can pull swimmers — or people on flotation devices — out to sea.

While the story of Myers and her son ended happily, with her boyfriend and others calling for help and a rescue by a West Manatee Fire Rescue crew aboard a boat, it was traumatic.

Myers went to the beach at noon that Sunday, set up her chairs and umbrella “like I usually do,” blew up the float, deciding to trust what she thought were calm waters — and, with her son, began paddling out.

“Thank God I told my boyfriend what we were doing,” Myers said Nov. 1.

“Then it happened so quickly. The wind, the currents took us straight out from the Sandbar (Restaurant).”

They drifted for at least an hour, she said, “We were drifting — drifting to Mexico.”

Myers tried to get other boats to notice their plight, to no avail. Nonetheless, she kept reassuring her son they’d be rescued.

And once they saw the emergency lights flashing on the WMFR boat, relief and tears overcame the mother and son.

“I thank God people saw us from the beach,” she said.

The rescuers towed the pair to the Rod & Reel Pier, she said, adding, “We never got wet.”

As far as the Mega Swan, Myers would like more effective manufacturer warnings on the danger of using pool flotation devices in the open sea.

And, in their case, its demise was inevitable.

Safe on shore, they destroyed the Mega Swan by poking it with a shark’s tooth Brennan had with him that fateful day.

Myers is baking banana bread for her heroes on the WMFR boat.

Getting caught in rip currents at the north end of Anna Maria Island can be life threatening.

Tara Myers and her son’s close call with disaster Oct. 21 is just the latest story.

Other incidents in Anna Maria waters include:

Also in July 2013, 12 young swimmers were rescued from a strong northerly current near Sycamore Avenue.

In August 2010, two adult family members died and two survived after being pulled underwater north of the Sandbar Restaurant.