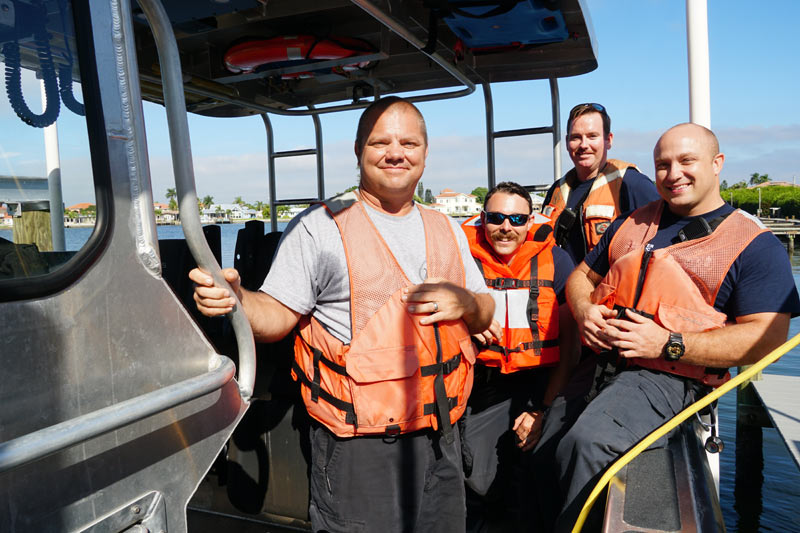 West Manatee Fire Rescue Capt. Ryan Moore and firefighters Cameron Frazier, Andrew Powers and Jay Johnson pause Nov. 14 on the emergency boat that was first on the scene to rescue Tara Myers and her 7-year-old son Brennan Saletta from the Gulf of Mexico. The mother and son were swept to sea on a raft while floating near the Sandbar Restaurant in Anna Maria. Islander Photos: Kathy Prucnell

Tara Myers and 7-year-old son Brennan Saletta were rescued by a West Manatee Fire Rescue boat crew Oct. 21 after a rip current swept them in their oversized inflatable swan more than a mile off Anna Maria into the Gulf of Mexico.

The Islander learned about the rescue from an incident report among the Manatee County sheriff’s records and started the ball rolling with a Nov. 7 story. Since its publication in print and on the internet, Myers and her son have been thrust into the limelight.

A week after appearances on “Good Morning America” and “Inside Edition” and a continuous stream of calls from reporters, producers and editors — from Tampa to Cuba, New York to London and Australia — the Bradenton mom was graciously accepting the attention with humor.

Indeed, Tara Myers had something silly to say Nov. 15: “Hee, hee, hee. Look what your news article did — we did.”

Tara Myers took the experience — reporters leaving messages, camera crews showing up in her driveway and trying to schedule TV appearances between a busy work schedule and raising her son — in stride.

She also hoped the media would shed more light on her rescuers.

All responding units, including WMFR’s boat and land-based personnel and equipment, were dispatched at 12:19 p.m.

By 12:38 p.m., the WMFR boat crew arrived with their emergency lights flashing brightly — much to the relief of mother and son.

Moore said first-responders were initially told the victims were about a half to three-quarters of a mile out to sea near Bean Point but, when they got there, they saw “a little speck” a mile-and-a-half due west.

The current was so strong, Moore added, a diver was unable to pull the swan, mother and son, closer to the boat, so the 30-foot boat pulled up to the swan to make the rescue.

The WMFR captain commended Tara and Brennan for their composure during the experience.

“She just found herself in a situation that happened so rapidly. She did the safe thing … staying calm and collected” and it was good that they stayed on the raft, he added.

In the rescue’s aftermath, Tara said she’s never been busier. Asked how her son was holding up, she laughed and said, “He’s just ridiculous.”

“I don’t normally get voicemail. I never check my phone,” she said, adding “I feel bad — like I should call everyone back.”

When “Good Morning America” called for an arranged a 10 p.m. interview, Tara said it was one too many interviews for Brennan that day.

But Myers was intent on creating awareness that oversized inflatable rafts do not make safe beach floats and she so wanted the story to air nationally, she bribed her son to stay awake with candy.

Both Sandy and Tara said they hope the “The Ellen DeGeneres Show” calls.

That would be a thrill.

One thought on “Story of mom, son swept to sea in Anna Maria goes national”