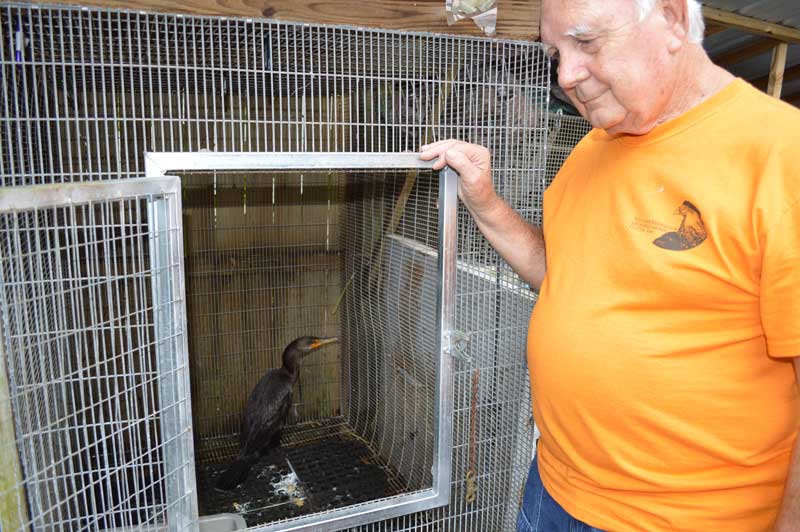 Ed Straight, president of the Wildlife Education and Rehabilitation Center in Bradenton Beach, looks in on a rescued cormorant Nov. 19. The waterbird likely is suffering from exposure to red tide, according to Straight. Islander Photo: ChrisAnn Silver Esformes

The tally included 44 cormorants, 28 laughing gulls, six pelicans, five ospreys and a variety of other shorebirds.

Straight said they have no way to test for red tide contamination at the facility, but the rash of sick shorebirds began with three ospreys in late July and slowed after about 15 cormorants were rescued the last week in October, paralleling the rise and decrease of the toxic algae in the water surrounding Anna Maria Island.

For 31 years, Wildlife Inc. has rescued and rehabilitated birds, mammals and reptiles in Manatee and Sarasota counties.

The organization is a volunteer-based nonprofit that runs on donations and grant funding.

Straight said many of the rescued birds were released within a week, although some smaller birds, including red knots and terns, and several cormorants and pelicans died, likely from eating fish that were poisoned by red tide.

Ed Straight’s wife Gail, his partner in Wildlife Inc., said their volunteers rescued significantly more birds from the recent red tide outbreak than during the last harmful algal bloom in 2006.

“It was a lot more cormorants this time,” she said. “Also, more laughing gulls.”

He said he got a call to rescue a cormorant that “fell from the sky” in Holmes Beach.

And he received an unusual call form a woman out of state who told Straight she found the facility’s phone number online. She claimed there was a cormorant in distress on her property in New York.

Straight said she thought the bird might have migrated from an area suffering from the red tide outbreak.

“I told her to contact her state agency, like the Florida Fish and Wildlife Conservation Commission here,” he said. “It could be anything toxic, not just red tide.”

Straight said the rescued birds were allowed to rest and eat fresh fish — thread herring and Spanish sardines caught in deeper water by A.P. Bell Fish Company in Cortez — which seemed to do the trick.

“Almost all of them took off and flew out of sight when we released them,” he said. “This tells me they definitely were recovered. They must’ve not had that much exposure.”

People noticed that many of the shorebirds that typically line the beaches departed when red tide worsened in August. Straight said they likely flew to areas that were not contaminated.

“People asked if they all died,” Straight said. “But I think they just went to where there was a better food source.”

He said as birds migrate south for the winter, including more cormorants, loons and American white pelicans, which already are being spotted on the island, he hopes they don’t get sick upon arrival.

“We have a little lull right now,” Straight said. “Let’s hope our friends from the north stay healthy, but that impact is yet to be seen.”